An Arizona company promoting firearms training and safety has filed a lawsuit against the City of Phoenix, alleging the City has violated its state and federal rights of free speech in censoring its advertising.

The action follows a controversial incident in which the company, TrainMeAZ, contracted with the City to display advertising at Phoenix bus stops; the ads were up for less than two weeks before the City tore them down. 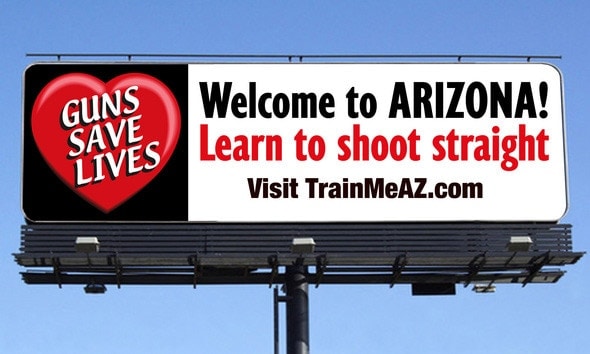 “My jaw dropped when people began to call asking where our ads went,” Alan Korwin, owner of TrainMeAZ, said in an email. “We were getting great responses when the City let us know they had decided our ads were unacceptable.”

The incident occurred in October 2010, when TrainMeAZ paid Phoenix $11,000 to allow the company to post advertising signs at 50 bus stops as part of a larger commercial advertising campaign. Only days later, the City told Korwin that the ads were not acceptable. The signs feature a large red heart overlaid with the words, “Guns Save Lives;” below, smaller type reads, “Arizona sez: Educate Your Kids” and “TrainMeAZ.com.” Several paragraphs of even smaller type speak about Arizona’s then-new law that no longer requires a permit for discrete carry of a firearm, and about the responsibility of firearms safety training. 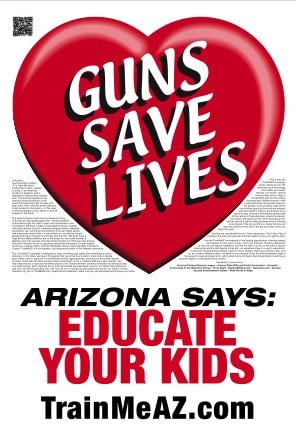 At the time, Phoenix Public Transit Department spokeswoman Marie Chapple said that the ads appeared to be public service announcements, which the city of Phoenix’s advertising policies prohibit. The City asked that TrainMeAZ change its ads to more clearly appear to be commercial in nature. City written policy requires advertising to “propose a commercial transaction.”

“We began an active dialog with the City about the content to which they objected,” Korwin said. “While we awaited for the next phone call, they had them all torn down literally overnight, without notice.”

Korwin said that a survey of other ads posted on City property showed many to be public service ads and others that failed to clearly “propose a commercial transaction.” Korwin said this suggests that the City’s real objection was to the TrainMeAZ content, and he calls the City’s action, “censorship.” After several months of seeking resolution with the City and examining options, Korwin filed suit in mid-May; the Goldwater Institute, an independent government watchdog, is representing Korwin and TrainMeAZ.

The suit alleges the City of Phoenix and Phoenix Public Transit Department Director Debbie Cotton are in violation of Korwin’s fundamental state and federal rights to free speech. 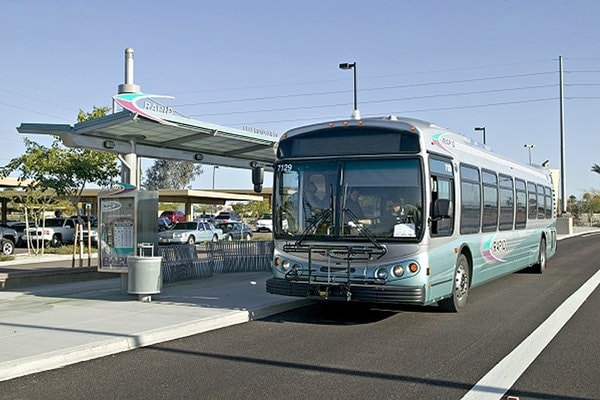 A federal appeals court has already ruled that cities may prohibit all but commercial advertising on its property, including bus stops and benches. But that isn’t the issue. At the heart of the argument are the City’s advertising standards, which Korwin says are, “inconsistently and arbitrarily applied.”

The Institute alleges that the City failed to provide Korwin with any standard that would meet its requirement to, “propose a commercial transaction.” This leaves the door wide open to any individual in City government with the power to do so to censor any advertising to which he or she has a personal objection – which may be what has happened in Phoenix, though the lawsuit doesn’t accuse any specific City staffer of doing so.

“Clear standards are required under the Arizona and U.S. constitutions to prevent arbitrary discrimination by government officials against messages they don’t like,” the Institute said in a release posted on its website.

TrainMeAZ does not conduct firearms training. Rather, it is a website, TrainMeAZ.com, Korwin created to offer centralized information on firearms training and shooting locations in Arizona. The business profits from advertising and the selling of business sponsorships. Korwin is also a writer and publisher of firearms related books. 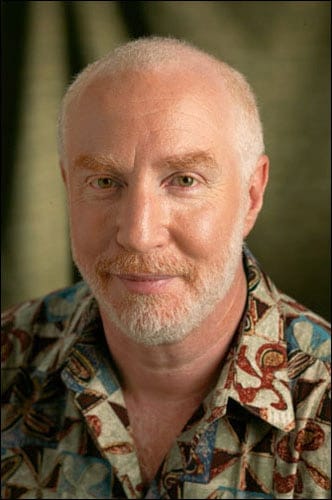