When the Independence Missouri Police Department received a report of a renegade alligator skulking around the Ozarks, officers responded in very much the way we’ve come to demand that all our Law Enforcement Agencies respond—in full force.  After placing a call into the Missouri Conservation Department for guidance on how to proceed, Missouri lawmen got the nod to mow the invasive reptile down where it stood.  They located the animal near a creek bed and, after creating an impromptu firing line, put at least two shots into Rick Sheridan’s concrete lawn ornament.

At the time he first heard the shots, Sheridan was working in his garage but soon found himself running toward the gunfire.  He found the officers lined up on the bank, plugging away at the “large prehistoric reptile.”

Sheridan laughs about the incident now and told the press he does not blame the Police Department in any way for trying to put his “concrete scarecrow”, originally intended to keep trespassers off of his property, out of commission. 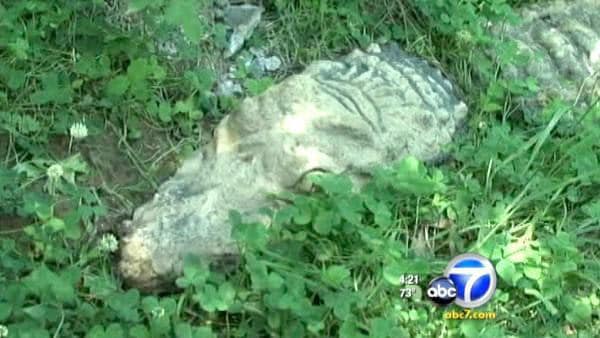 The police report attributes the alligator report to an unnamed resident who discovered the “creature” after his son led him to it in the woods behind Sheridan’s home.   It also states police fired at least two shots before realizing something was amiss.  The police contacted Sheridan personally to apologize to him.

They also recommended Sheridan use “No Trespassing” signs instead of a massive lifelike alligator—a suggestion Sheridan takes issue with after years of problems with overzealous outdoorsmen.  According to a Fox News interview, though the alligator was not intended solely to scare away children as was previously reported, Sheridan claims that he did post “No Trespassing” signs for years only to see them either vandalized or stolen.  He cooked up the alligator after he realized it would very unlikely that anybody would be inclined to attempt, or be able to, to move the life size replica. 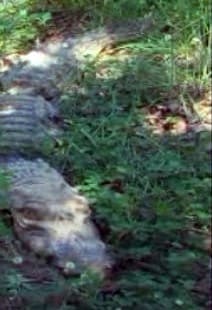