Father’s Day was originally developed in 1910 to complement Mother’s Day. No father asked for it, in fact it was mom who pushed for it, but nevertheless it has evolved into a day to fuel fathers’ favorite recreational activities such as fixing stuff, playing golf, shooting guns and drinking beer (maybe I’m speaking a little too close to home). And we at Guns.com would like to take it one step further. We decided to see how many we could combine, so here are “Father’s Five Favorites: A Guns.com Guide to Gifts.”

There’s always something that needs to be done around the house, isn’t there? And dad could always use some new tools. But when I look in the garage he already seems to have everything. But does he have a nail gun? No, a real nail gun.

Guns.com reported on it a couple months back. It’s an AR-15 platform DeWalt nail gun and capable of driving a nail 200 yards out. However, it’s a little bit of false advertising, it isn’t actually made by DeWalt and you won’t be able to find it in any stores sorry. Custom only.

Sorry for the tease there, so lets move on to something a little more tangible. The Gun Tool. 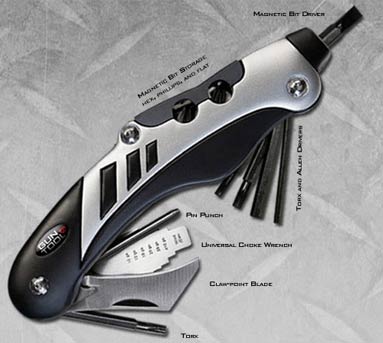 It’s kind of As Seen on TV type dealy, but still its shtick is a universal long-gun multi-tool. Tighten scopes, change choke tubes, or breakdown a rifle with one tool.

Let’s move on to golf. Can your dad drive a golf ball 500 yards? If he can, good for him. If he can’t then help him out with the AGOLF, the AR-15 Golf Ball Launcher. 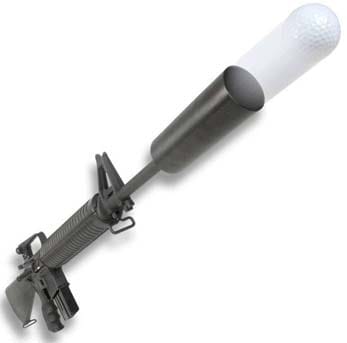 According to NCSTAR, the company that makes it, the AGOLF can attach to any threaded AR-15 barrel. Once you attach it to your barrel, load up blank cartridges and four!

At the end of the day dad may want a nice refreshing cold one, but he also might be tired of drinking beer the old fashion way. Maybe he wants to shoot it in his mouth? 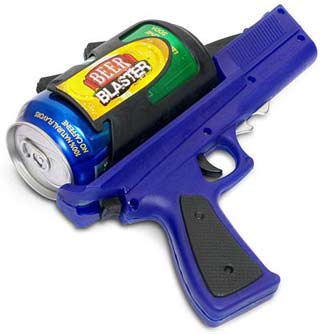 The Beer Blaster Liquid Shooter. All you got to do is load it up, a pin will puncture the bottom of the can and the trigger squirts the liquid. A canned beverage fueled squirt gun.

So at the end of the day, dad will be tired. He nailed the planks to the fence, shot a few rounds of golf, and destroyed a few beers, so why not end the night with a bang.

This little beauty is a .58 caliber black powder cannon made by Kennesaw Cannon Company. It has a 4.25” barrel and rests on a composite frame. There’s a garrison and a field model, but both work the same way. Just load it up with powder, light the fuse and ka-blewy.

Well, thanks for reading and let us know some of your favorite Father’s Day gifts are. Otherwise Guns.com hopes dads out there everywhere have a happy Father’s Day.