All Choked Up?: Demystifying the Mystery of “The Right” Choke

“You missed that duck because your choke is too tight,” my hunting partner quipped. “No, I didn’t, you numbskull. I missed because I shot behind the bird. I’m behind this gun and I know what I did wrong.”

Waterfowl hunters are no different than deer hunters, upland bird hunters or any other type of hunter for that matter. They will all argue incessantly about what is the best load, the best powder…or the best choke. 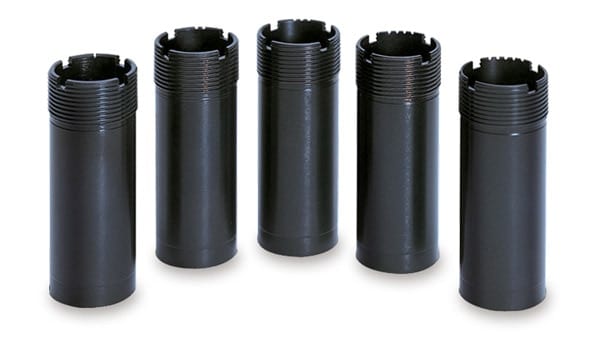 The reality of the matter for waterfowl hunters is that choosing a choke for your favorite gun is one of the most confusing, most misunderstood, most frustrating and sometimes most counter- productive choices you will make about your shotgun. With the relatively recent addition of non-toxic shot, the recipe for confusion in the choke world was compounded instantly. 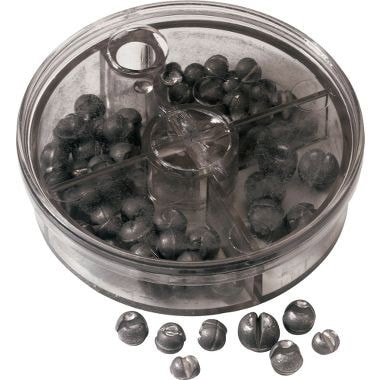 My honest contention towards the matter of chokes (wives hate me for this) is that a man needs a gun for every conceivable distance one might find himself shooting. Actually, he needs several of each gun, each loaded with different shot sizes and powder loads. The combination of possible shooting scenarios is mindboggling. Therein lays the base problem with choke selection. The best choke is always relative to the distance to your intended target and how your chosen load patterns at that distance. We all think we have the right answers, thus the perpetual arguments with our buddies.

We are all trained psychologically to pattern our guns each season, especially if we have installed a new choke. We are all correct in assuming that the choke affects our pattern. However, most shotgunners fail to realize that the shot holes on a pattern board only give us two-thirds of a three dimensional phenomena. A pattern board only demonstrates the width and height of a shot group. The board gives us no indication about the length of the shot string, thus leaving out a full one-third of the shooting equation. This omission can in turn greatly mislead you about choke choice.

Modern research seems to be telling us that with unbuffered lead and most of today’s non-toxic loads in 10, 12, 16 and 20 gauge shotgunners with one choke would best be served with an improved cylinder choke for all shots out to 35 yards. Modified and full chokes are used for greater pattern density at greater distances. 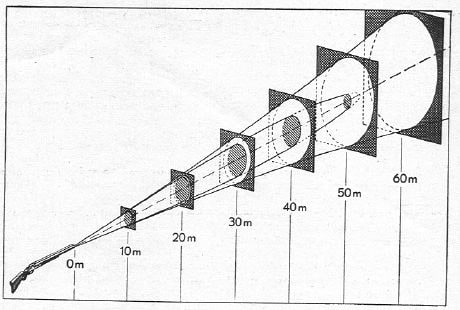 But let’s just pump the brakes for a minute here and reaffirm something more important than any piece of equipment.  The main skill needed by all waterfowl hunters is the ability to hit their intended target—when you boil it down, if you can’t do this why do anything? The key factor which rears its ugly head more often than any other in the field that limits hunters’ bagging success is not the crippling rate, nor the load they are shooting through their chokes, but rather the hunters ability to hit the target. 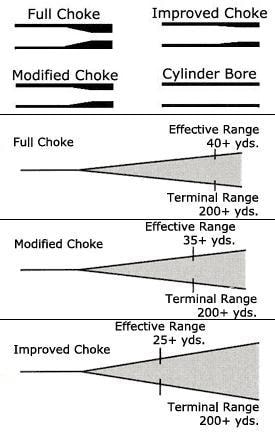 And so, with this in our back pocket, it stands to reason that any choke which produces the best patterns and shot string at the distance the shooter expects to do most of his shooting will increase his hitting success. Determining your “average” shooting distance is the real kicker. It takes a confident duck hunter to regularly set his decoys at the same distance and call ducks into those dekes in the same manner each trip. That plan works like a pickup truck out of gas. 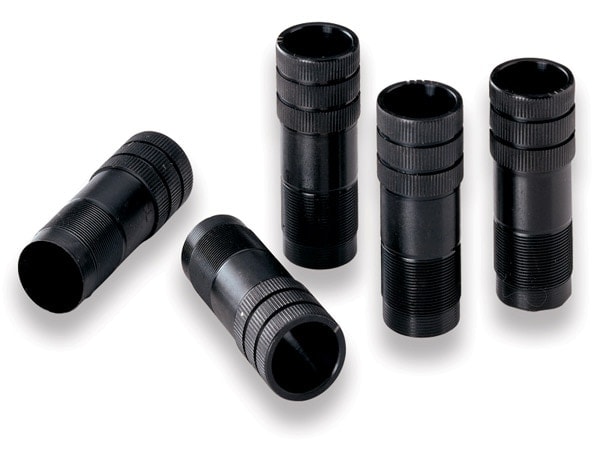 There has long been a notion among waterfowl hunters that open chokes cripple more birds and that full chokes make clean hits-or-misses more likely. Considering this, one would conclude that a clean kill or miss without cripples would be more prominent. Shooting test data clearly demonstrates, however, that there is no significant difference among chokes in crippling rates. Data does indicate that bagging success increases with the usage of the most open choke best suited for the range an individual is shooting. 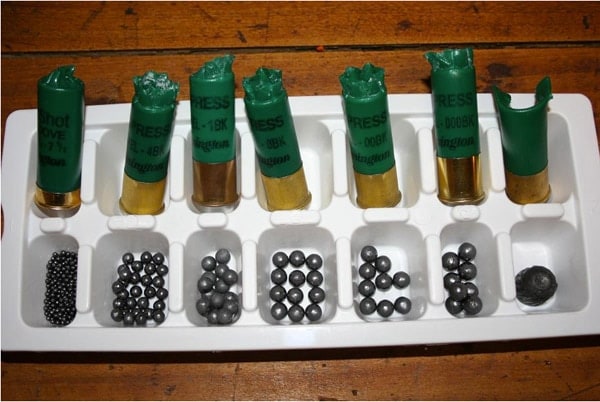 Choke patterns change dramatically when hard pellet types are used, such as certain hard tungsten pellet types like Hevi-Shot and Remington Wingmaster HD. Shooting tests reveal that the hard non-toxics do not produce the stairstep fall-off in patterns hunters are normally used to with lead shot when going from a modified to a full choke. Hard non-toxic pellets in sizes NO. 2 through BB pattern virtually identically from a full or modified choke. These loads pattern very similar to buffered lead fired through a full or modified choke. Smaller shot sizes, 4’s, 5’s and 6’s, produce patterns that open stairstep like from full to modified to improved cylinder, but are still tighter than what you would get from unbuffered lead 4’s. 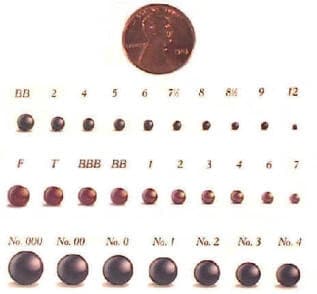 Most hard nontoxic shot sizes on the market now will require you to go all the way to an improved cylinder for more open patterns. The improved cylinder will also provide the benefit of longer shot strings, a major aid in hitting targets with these tight patterning, short shot string projectile types 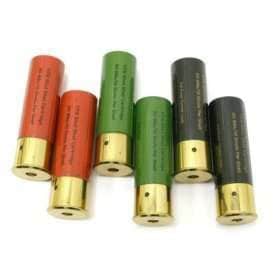 For sizes larger than 4’s in non-toxic, go to an improved cylinder choke for shots out to 50-yards. Beyond that distance you will want to use an improved-modified choke.

Over and unders are popular with waterfowl hunters not only because of the sleek style and fancy looks. Two barrels allow for two chokes. For hard non-toxics, an improved cylinder/modified double would serve for about 85 percent of all shots for waterfowl. For shots beyond 50 yards, go with a modified/improved modified choke combination. 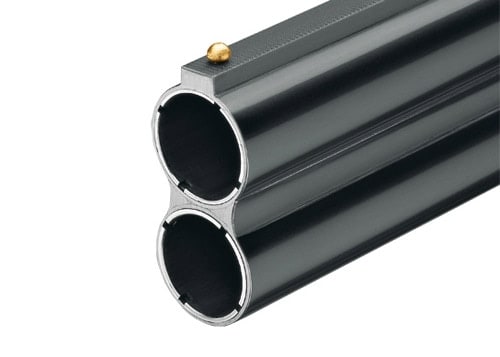 The key to remember is that choke is always relative to load type and the distance at which most shots are taken in the field. Again, the over-under shooter has an advantage. However, even the stacked barrel shooters should carry extra chokes to cover a wide variety of shooting conditions.

Back to my original point, choosing chokes is confusing. Rather than shoot thousands of rounds through a dozen or more chokes, try going to a shooting range or visit with as many waterfowl hunters as possible to get their opinions before sinking a lot of money into a batch of chokes that may not perform up to your expectations. 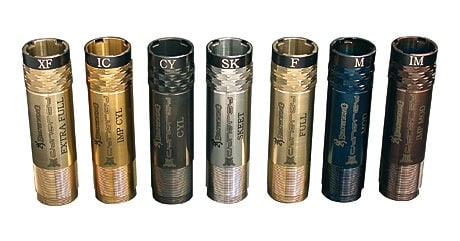 Also remember: a new choke’s quality is based on the quality of its construction. Hard shot requires choke tubes tough enough to handle the hard shot. Often, chokes included with factory guns become scratched and useless after having hard shot fired through them.

When looking at any choke tube make sure it is 17-4 stainless steel and that it has been heat treated for maximum strength. Also check the length of the parallel section of the tube. Parallels in the 1-to-1 1/8-inch range have consistently provided better and more consistent patterns.

Trulok Super Waterfowl tubes have received rave reviews from waterfowl hunters. The Smith and Wesson 695 and 700 have performed well with Hevi-Shot 4’s and Remington BB’s up to 50 yards. 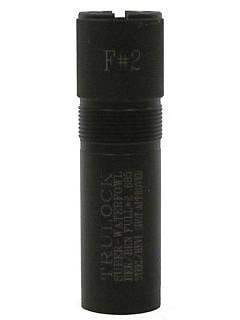 The Black Diamond Triumph line of chokes from Indian Creek Shooting Systems is also receiving hurrahs. Indian Creek has been the leader in turkey shoot competitions for several years running. These boys know what they are doing and now they are serving waterfowl hunters.

Regardless of what type or brand of choke use select for your waterfowling purposes, practice with it before going afield. Being able to hit the target, namely ducks, is the name of the game. As a rule of thumb with the hard shot, choose very open chokes within 25 yards and work up to modified for further shots and eventually full chokes for pass shooting. 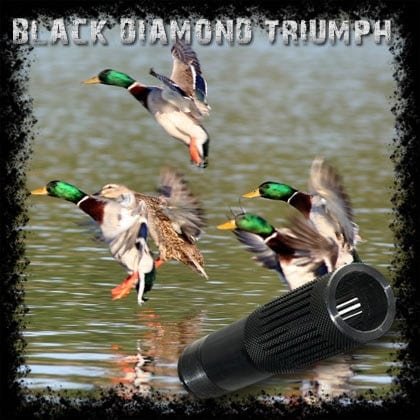 A wise old duck hunter once said, “I’ve seen very few ducks missed by guys who shoot out in front of ducks. Shoot behind them and you don’t have a chance of knocking them down. Shoot in front of them and your chances of connecting skyrocket.”

Ducks continued to pour into our decoy set, often attempting to settle between the dekes and the boat. Fast flyers zoomed across the set with reckless abandon. My improved cylinder choke worked every time I shot in front of passing ducks, which was often. My wise-cracking buddy struggled with his modified choke. His pattern proved so tight, the shot string was gone before birds could fly into it. But, what are duck hunting buddies for anyway?