The Delicate Matter Of Getting A Second Hunting Dog

My two Labs, Pete and Peg sat at opposite ends of my duck hunting boat, patiently scanning the early morning skies for approaching ducks. Each had their “stand”, a place in the boat, which belonged to them and they respected each others’ position. After retrieving a duck each would return to their designated spot upon hearing the command “stand.”

Ducks filled the horizon and Pete and Peg perked their ears to the reverberating sounds of the wing beats of 200 ducks as they sped by overhead in the waning darkness. Bluebills fly early. Five minutes stood between us and legal shooting time. 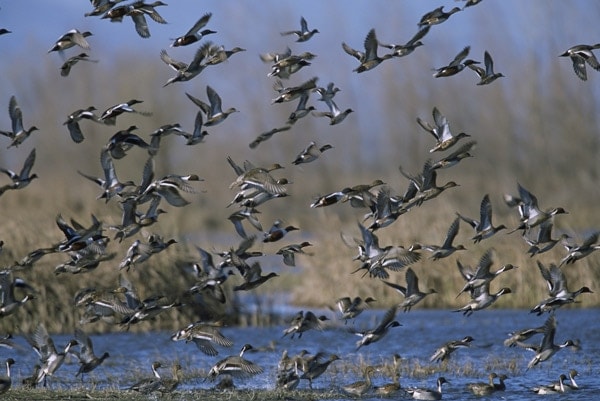 My pair of Labs quivered with excitement. Pete, the younger dog, stood from his stand to peer into the fading darkness. Peg, not to be outdone, also stood. A solid command of “stand,” put them back into their proper places.

The large group of bluebills circled our decoy set a half dozen times coming closer with each pass. Bluebills most often skim the outside edge of decoy spreads. Our perfect set, on the tip of a long point, proved effective. The decoys on the outside of the spread sat a mere 25 yards from the boat. We knew the habits of bluebills well and were about to take advantage of this. 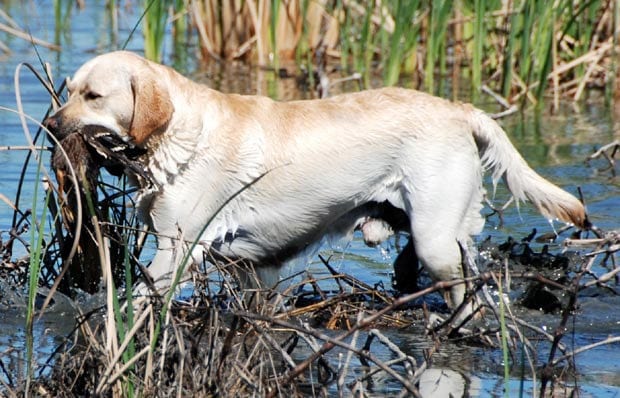 I whispered to my hunting buddy to get ready. The inside edge of the group of ducks swung directly over the center of our spread. After the smoke cleared, one bluebill lay kicking in the dekes.

I gave Peg the command to retrieve the duck. She had no more than hit the water when Pete broke from his stand position and bailed into the water, racing to get to the duck before Peg. A loud whistle and a scornful, “No, Pete,” turned him around and brought him back to the boat.” 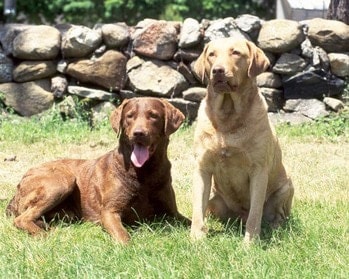 Making the decision to obtain a second hunting dog can be tough and must be thought through thoroughly: make no mistake it is a decision that will affect you and your first dog for years to come and it nearly doubles the amount of time, money, training and affection you’ll be expected to shell out on what can often be a fiercely competitive animal.

However my duck-hunting dilemma—the one that puts two cooperative yet still challenging dogs in the same boat—is happily shared by thousands of other two-dog owners in similar situations.

Making the decision to get a second dog should be preempted by lots of soul searching. Deciding to take on another dog just to have another dog is one thing. However, taking on another dog as a hunting mate to your first dog is a different ball game altogether. 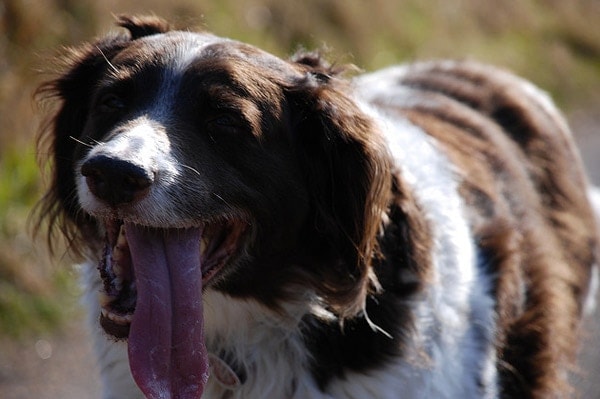 Before buying a second dog, you should rigorously evaluate your first dog. Make a list of questions to ask yourself about your number one dog. Is that dog aggressive or passive? Is it old or young? Will the dog be able to handle the stress of having another dog around? Is your current dog bigger or smaller than the second dog you hope to acquire? Will your first dog accept a kennel mate, or will you have to house the dogs separately? Will your original dog handle the presence of a second dog hunting next to it without undue jealously?

It is always best to try to figure out every angle and ask every question before plunging into the purchase of a second dog (or pretty much doing anything in life).  Asking the questions now instead if finding out the answers much later after Fido #2 moves in, is a recipe for saving yourself (and your dogs) a lot of pain and suffering. 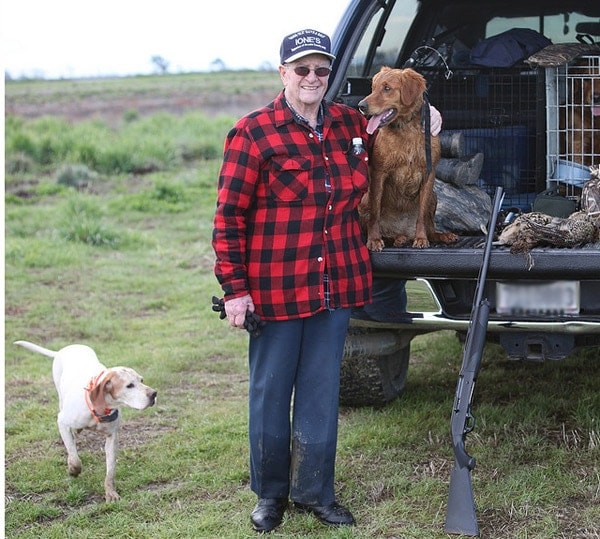 A major consideration in acquiring a second dog is deciding if you are going to get the same breed of dog or another breed. If you are going to buy a different breed than what you already have, study the new breed carefully. Take into consideration how the new dog will relate to the old dog. Will you be hunting with them together or separately? Each dog will need training to adjust to the new conditions, especially if they are hunted together and, above all, it will take lots of practice to train the dogs to be disciplined around each other and that some types of behavior are acceptable while others are not.

It is not uncommon to pair two hunting dogs together of different breeds, especially when hunting certain types of birds. Many bird hunting outfitters use a pointing dog to find birds and a Lab to flush and retrieve the birds. Combinations of dogs such and pointers and Labs certainly make for a fun and exciting pair of working dogs in the field. 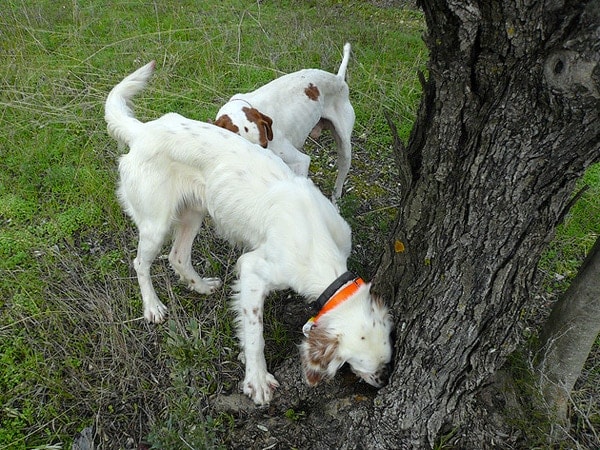 Waterfowl hunters as well have been known to use a variety of dogs in combination, especially in field hunting situations. Chesapeakes, Labs and Water Spaniels are common combinations. Others to consider are the Curly Coated, Flat Coated and Scotia Duck Tolling Retrievers. 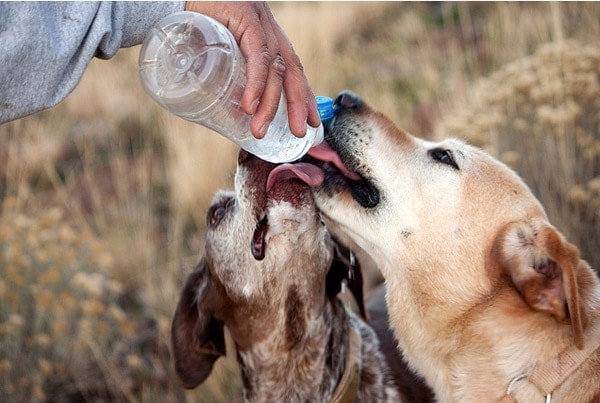 Dogs do learn quickly when training sessions are repeated frequently. It is best to keep training sessions short. Your main goal at this point is to acclimate the dogs to one another. First meetings can be stressful on all concerned. Dogs are naturally curious about one another. However, sessions together must be highly controlled so that matters do not get out of hand. Older dogs will want to establish dominance quickly. That is a natural process in the dog world, but cannot be allowed to get out hand. Allowing a more mature dog to beat up on a pup is a step in the wrong direction. The two may never get along as a result of a very bad first meeting. Introductions should be very brief. Time together can be extended as the two dogs begin to socialize in an acceptable manner. Any bad behavior should be thwarted immediately. Giving food rewards is a good way to reinforce good behavior accompanied by lots of praise. Your dogs do want to please you. Your older dog already knows how to do that, but will need additional training about how to behave with a second dog in the picture. 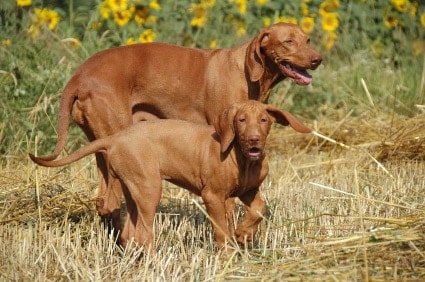 A key element in getting a second dog is timing, or the age and development of your first dog. Acquiring a second dog before the first dog is thoroughly trained is a mistake many hunters make simply because of time involvements. Few of us have time to commit to training two new or nearly new dogs at once. Remember, even while you are training a new dog, you must continue working with your first dog and then as a second step you must begin working the two dogs together. 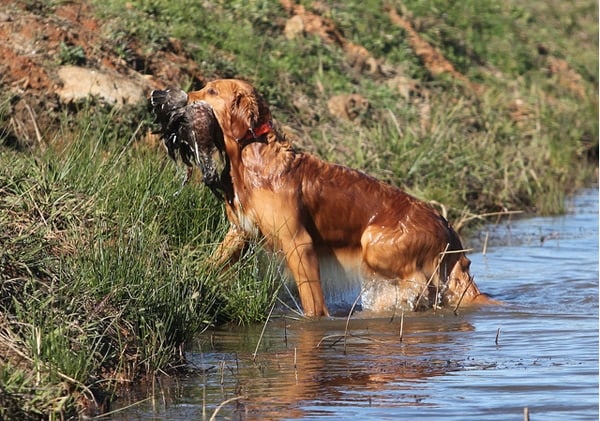 Again, this needs to be a slow, gradual process. A few minutes a day is all you need to invest at first. As the dogs improve in their social skills and actually begin to enjoy their training time together, you can extend the training sessions for up to an hour. Usually, by the time an hour is up, everyone, including you is tired. Be sure to end the sessions before one of the dogs begins to tire and produce a sloppy performance. Stop the training session on a productive high and make sure you end at a time when the dogs deserve a huge amount of praise. Do not end training sessions on a sour note. 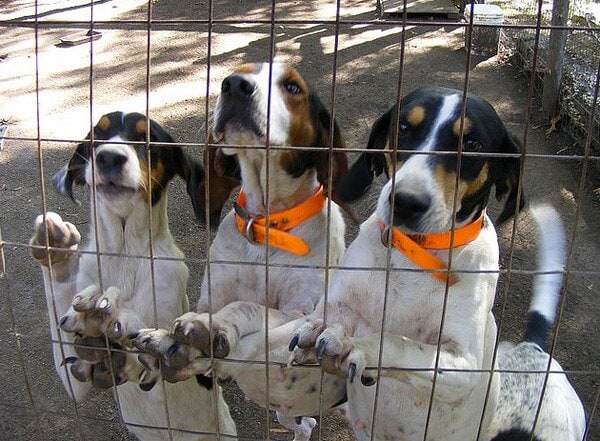 Deciding at what age your first dog is ready to accept a second dog in the picture will be largely dependent on how well trained the dog is and what kind of relationship you have with the dog. If you have allowed the dog to get sloppy in his work during training sessions, adding a second dog will make it worse. Your first dog must be command tight before you introduce a second dog. Following this discipline will make life easier on your dogs and you and insure years of fun and productive hunting for the trio. 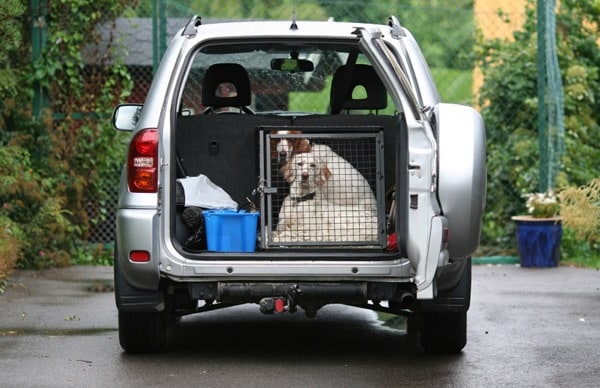 Bluebills continued to arrive on the lake. Ducks buzzed our decoys steadily. I downed the next bird. “Pete”, I yelled. He broke from his position at the end of the boat, trotted the length of the board and stepped onto the landing platform at the boats edge, before plunging into the frigid water to retrieve his first duck of the day. Peg never broke from her stand.

Peg remained the dominate dog of the pair until she was 11 years old. However, both Pete and Peg remained sound to their respective stands until Peg was unable to make the trips anymore. At that point, Pete became the proud dog captain of the ship. Introducing him to a new pup would be interesting. Every dog is different.