The 30-Year Old Virgin (Shooter): My First Time Firing a Gun and What It Taught Me

I was thirty years old the first time I shot a gun. We had driven south along Lake Shore before cutting over to I-94/90 and finally to the Skyway. Rolling banks of fog obscured the Chicago skyline, Lake Michigan and the industry-scape of the area below us. We drove toward Hammond, Indiana—drove toward Deb’s Gun Range, our bellies full of pastries and coffee.

Even at thirty, I couldn’t prevent a huge grin from splashing across my face from time to time.  Even just thinking about holding the gun, and, later, in the nervousness of picking out targets, the grin returned. It kept coming out, my mind full of anxiety balanced against the deadly seriousness of explosions and moving metal. 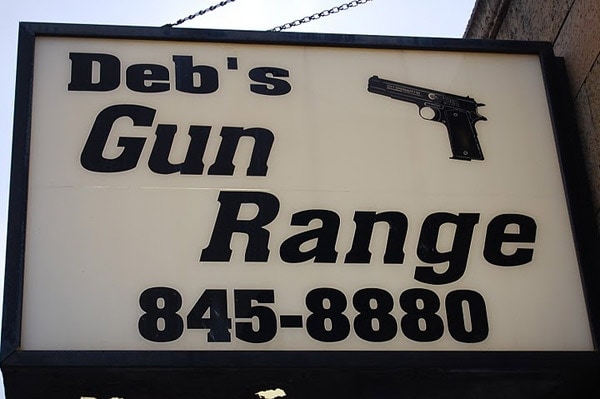 We checked in, sliding our driver’s licenses across the glass counter holding various choices of rental pistols. One of the men working asked us, “What brought you guys together from so far off?” as he looked at our licenses from Illinois, New Mexico, and South Carolina.

I remember thinking it was funny that we were all there, too. We had all talked about going shooting before. How I had never held or fired a gun before. Neither had Andrew. But we wanted to. I wanted to know that part of myself better, the part of me that could fire something so powerful.  It seemed like such a necessary part and hence, a shame, it was something I knew so little about. 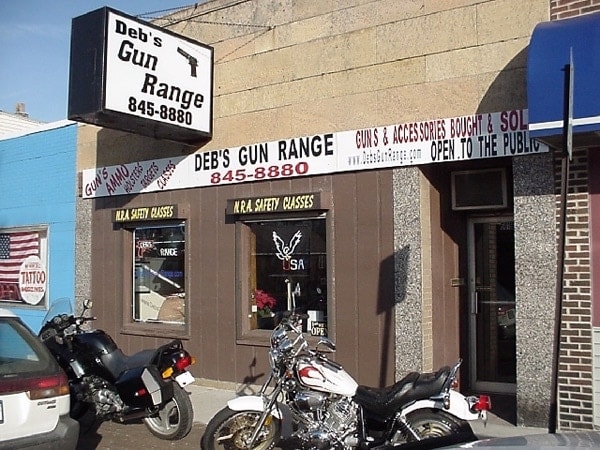 Deb’s sits with some measure of prominence among the typical small town shops that line what seemed to me to be a typical small town thoroughfare. The ground level of the range resembled what can only be described as a gun thrift shop with errant holsters, slings, loaders and other miscellaneous shooting accessories sorted out into cardboard boxes, some marked with things like “bargain bin” or lazily displayed on racks.

A large glass display counter, which held all of the handguns available for rental, was the main focus of the room.  Inside were guns that were somehow familiar to me. Undoubtedly I had seen them one hundred times before in movies or television, but without their convenient placards listing price, make, model and whole bunch of other information I knew nothing about, I would have been clueless as to their names. 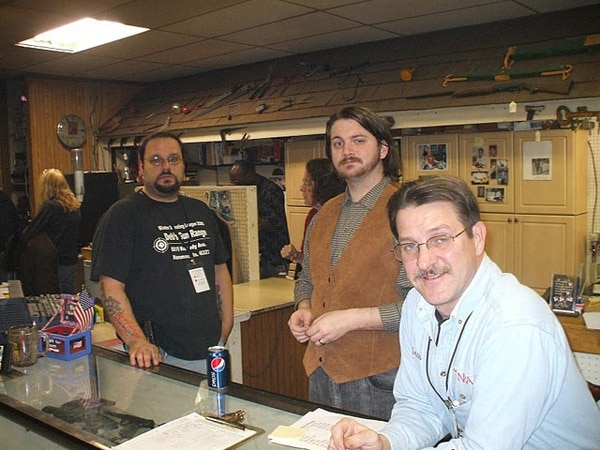 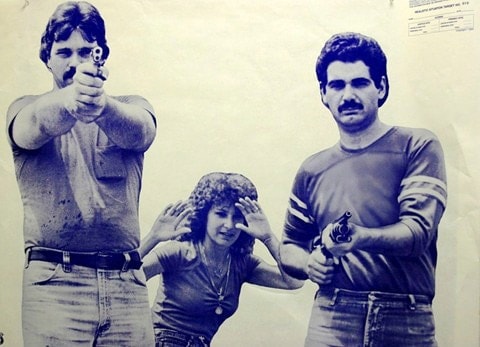 We were given head gear in the form of some heavy duty ear muff things and impatiently awaited the go ahead from the Rangemaster to proceed to the basement.

“You gotta put it on before I let you downstairs,” the man said, his belt holding a pistol on one side and a knife on the other. I fumbled with my belongings while trying to slip the heavy ear protection on, immediately muffling all sound.  We tromped downstairs. 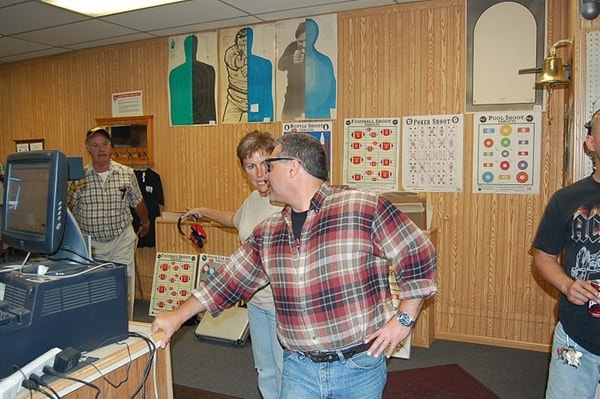 In the empty gallery, Daniel explained everything as if to a very young child and it succeeded in pushing through our by now less-than-conducive to shooting giddiness.

“This is a magazine,” he said. “This is how you load the magazine. You’ll have to press hard to push the bullets in. It holds eight.” He opened the first box of bullets and started slipping them into the magazine. He twisted his hand to show the numbers running down the side. “See,” he said. Light flashed against the hole beside the number eight, against the bit of brass showing through. 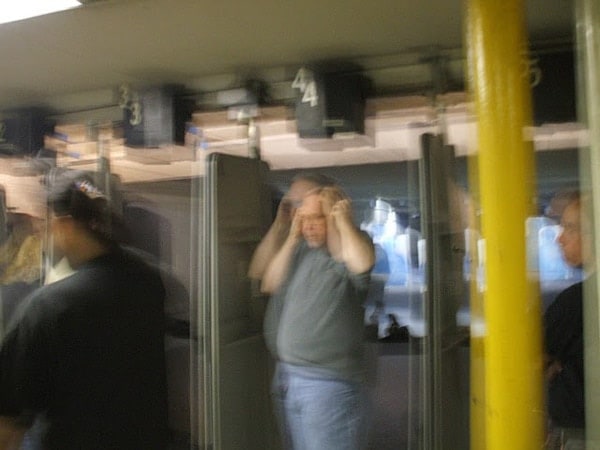 In basement’s silence, the solemnity of the event struck me. The giddy quality started to dissipate, flowing down the long stretch of gallery toward a single target left up from a previous shooter. Daniel showed us how to load the weapon, slamming the magazine in before cocking the weapon. His voice reached me even with my muffled hearing. Andrew went first. I couldn’t have prepared myself for the sound. Those gunshots were not pops or even bangs. They echoed in that basement chamber, worming their way around the heavy ear protection like boulders crashing together—metallic thunder, sharp and ferocious. 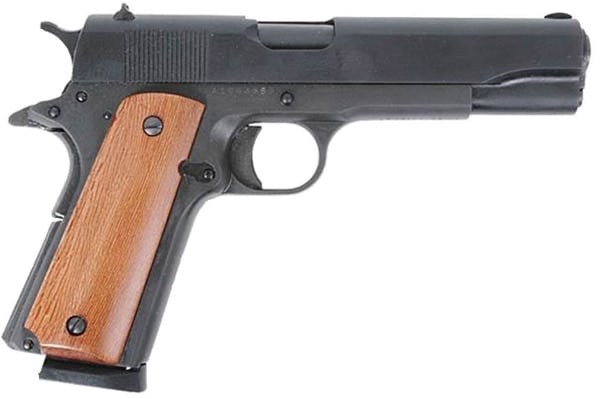 I took my turn. I hung up my poster, a blue shape of a man and pressed on the switch to send it whizzing along the wires halfway toward the back wall. I aimed the gun as instructed by Daniel, aiming center-mass.  The feel of that gun—a Rock Island 1911 chambered in .45 ACP—seemed alien clenched in my hands.  The weight of the thing, the “dense weight” if that makes sense, was the first thing to surprise me. The shock of the recoil as the gun jerked back upon squeezing the trigger surprised me next.

We started taking turns, going through a full magazine before switching off. After each round, as my hands trembled from being in the closest proximity to god-like power that they’d ever been, I pressed hard the smooth bullets into the magazine. I found it all very strange: that feeling of enjoying something—deriving fun from it—even while a course of fear jolted through me. 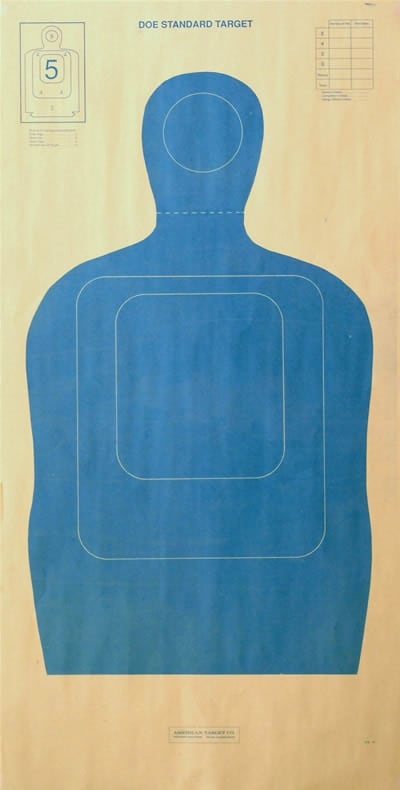 I found I conducted myself too tentatively. Not cocking the gun hard enough. Not using enough force to fill the magazine, having to struggle through my shaking hands. It was something so completely new at thirty that my mind struggled to wrap around it—to accommodate the new direction of hands, push past the stereotype movie movements to realize what strength it takes to hold, fire, and load. 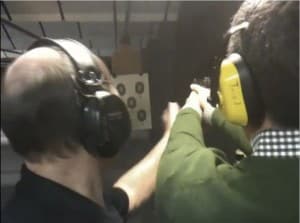 We wouldn’t be alone for long though. As the other men came—a trio with different weapons and then what appeared to be a father and son later—and loaded their weapons, their guns sounded more like pops, timid in comparison to the echoing clash of the .45 we held.

My senses struggled to take it all in: the weight of the gun, the banging sounds, the tinkling brass across the concrete basement floor—some of them rolling behind while a few catapulted through the air beside me or even into the lane next to me as my neighbor’s brass fell around my clenched hands, my locked elbow. 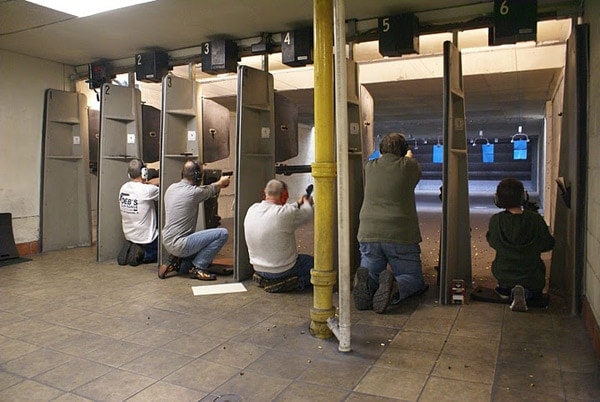 I didn’t notice the haze of the gun smoke until I stepped back—stepped out of the lane but in some ways back into myself. When standing there, squeezing the trigger, watching that sudden explosion of light, everyone else disappeared in that moment. I know that I’m not the first to say this, but that doesn’t make it any less true or less accurate. I had no idea of the tingling smell of the smoke that should have reminded me of bottle rockets and fireworks but didn’t until now, when my brain would take the time to draw a comparison.

In that moment, standing back to finally notice that smoke, I also could watch the other men at the targets. One of them on my far right, shot quickly. The impact of the lead or copper flashed against the far wall. I never knew if my own bullets did the same as the angle prevented it. The targets spread across the basement: blue, orange, black and white. The red dot of a laser scope hovered, shaking slightly, over the faces of the paper photographs. 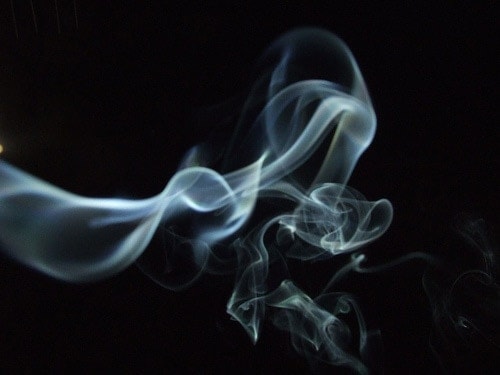 We went through our boxes of rounds and headed up stairs. I followed Daniel’s lead in washing my hands. The bathroom, in its utter cleanliness and order—something I hadn’t expected in this place where the clerks wore pistols on their hips and smoked in the store—shocked me in a way different from the gun. A tiny parrot looked out from the Softsoap container I pumped for lather as I let the water run over my hands into the large, metal basin. I just couldn’t wrap my head around the incongruity of the bathroom and my own expectations of it just as I am still trying to do with the act of shooting the gun.