This Week in Videos: High-Speed Shooting, Improvised Weapons, and the Fall of the Iron Curtain

It’s been another fine week for us at Guns.com and we’ve been busy covering news of all sorts.  But before we re-cap it, we have an announcement to make: we have a new forum! Due to overwhelming requests for a better place for comments, we overhauled the section and welcome you to speak your mind.  And why shouldn’t you?

Every comment adds to your odds of getting the grand prize in our XD(m) giveaway, which we’ll be wrapping up at the end of this month.  What XD(m) are we giving away?  We don’t even know, it’s still a secret!

For fans of firearms of the past, this week we’ve covered a handful of interesting gun stories, the one about the round that propped up an empire, the .303 British, featured side-by-side with the American icon, the M1 Garand, and on the subject of revolvers, we went into the history of the immortal .45 Colt and the failed assassination attempt on President Truman.

Not that we skimped on current events: reporters in Pakistan are allowed, practically encouraged now, to pack heat.  They’re not alone: on their way to Asia Minor are plenty of new rifles and machine guns for the U.S. Army.  Back on our continent, things got a bit hairy after a cowboy mistook real bullets for blanks at a tragic reenactment gone wrong, proving that you can’t have too much training.

But the real action’s going on in the South.  In Ciudad Mier, Tamaulipas, Mexican authorities have captured a third-generation narco-tank, U.S. Border Patrol troopers shot and killed a stone-throwing immigrant, and Project Arm The Mexican Drug Lords has got Senator Grassley all ready to give the ATF a serious probing.

Plus we reviewed the classic Springfield M1903 rifle, and the popular H&K USP Compact in 9mm.  You’ve got your reading, but first, take a break.  Watch some videos:

That, friends, is a 10-year-old girl by the name of Cori, and she can outshoot most adults.  And just look at that trigger discipline!  That’s quality shooting right there.  For quality shooting of a completely different sort, there’s high-speed film:

And that is why you’re not supposed to stand in front of tanks.  They’ll leave you feeling all explody.  T90s, by the way, are in full use by the Libyan army.  Being a rebel is hard. Being a smart rebel, well, that’s just smart:

The truth is, though, that when it comes to defending yourself from tyranny or the roving armies of a rape cult, improvised weapons mean the difference between freedom and death.

Because not everyone has a great military, or science, or money to set up anti-missile defenses like this one, the awesome high-tech 21st century Iron Curtain:

And finally, we’d be remiss if we didn’t share this wonderful explanation of Project Gunrunner by Jon Stewart, who precisely nails both the scale and severity of the ATFs misguided plans to, again, arm Mexican drug lords with military-class weaponry: 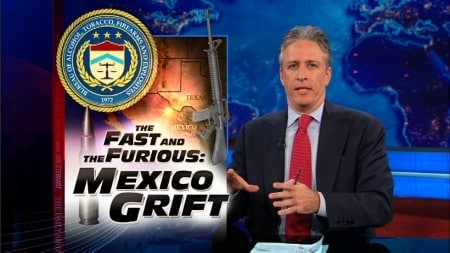 So that’s that.  Enjoy your weekend, and please, try to shoot something.