Bad things happen to people who run from the police.  All kinds of bad things.  But don’t let it be said that it stops at leaving your house intact.

When Will Chambliss stood off with the police inside his friend’s double-wide (of course it’s going to be a trailer, that’s the easiest way for Americans to make the international news) in Blountville, Tennessee for an entire day, he had ample time to imagine all the ways he was going to a., evade capture, b., surrender, or c., get taken out.  Suffice it to say we doubt he’d expected a police robot to burn the damn house down. The police, averse to the notion of going in there and pulling the guy out, decided to use teargas in an attempt to encourage him to leave on his own.  Not unheard of, fine, go ahead.  Well it so happens that they had really good teargas.  Teargas strong enough to handle crowds.  Actually, it’s in the teargas instructions.  “For use in the out-of-doors only.  Fire hazard.”  But with cutbacks, it’s not like they’re teaching robots how to read these days, so it was inevitable that something terrible would happen. 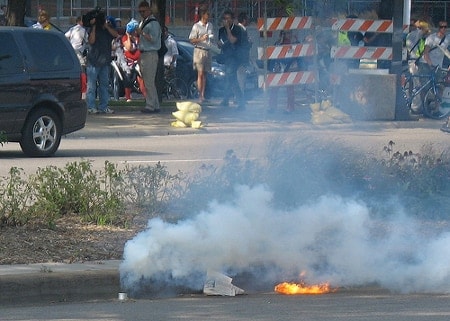 Robots are getting real popular; the idea of hands-off police (and military) work is appealing.  In the long run, it may even be cheaper, but for now the real value is in the fact that robots break, they don’t die.  And while military robots tend to be for killing folk, police robots are more suited to crowd-control and bomb removal, which, honestly, is a great way to get your cops trampled and blowed up, respectively. 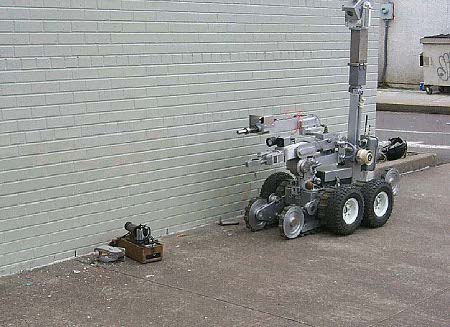 And you, generally speaking, load your crowd-control police robot with crowd-control tear gas, like the Triple Chaser by Defense Technologies.  It’s a single teargas canister that splits into three sections like some of that fancy ammo, each third burning off releasing its payload as quickly as possible.  They’re the same size and shape, however, as the flameless variety meant to be used indoors.

Which is how Will’s buddy Ellis Road wound up homeless.  Although the police are sticking with the story that their robot had read the manual stating that the Triple Chaser “Should not be deployed onto rooftops, in crawl spaces, or indoors due to its fire-producing capability,” and subsequently did not fire one into the trailer home, the charred remains of a Triple Chaser canister was indeed found in the ruins. 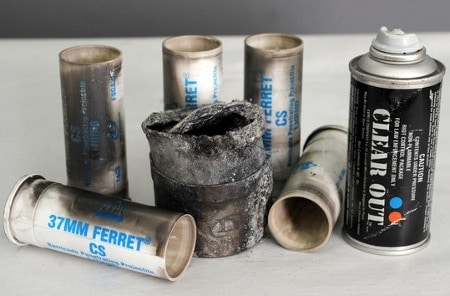 The worst part of all this is that Chambliss wasn’t in the home—he was at his mother’s nearby—they got the location wrong.  He had escaped well before the police had called in the robot; the all-day standoff was against no one.  He did, however, turn himself in, presumably after finding out they’d sent robots to incinerate all the places where he might be hiding. 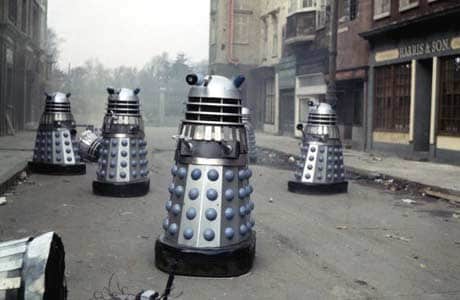 Chambliss was wanted for second-degree murder and known to possess “multiple rifles and pistols.”  What we want to know is if you think this is just good intentions gone awry, or if the police here are at serious fault for a., getting the location wrong, b., not verifying that Chambliss was even there, and c., burning the house to ashes using riot-control teargas specifically known to start fires fast?  Or something in-between?  Also, this probably wouldn’t have happened if the police went in there.  Are they right to avoid personal risks if the results may be house fires?