The question has been asked more than once, what weapon did Adolf Hitler use to commit suicide?

Well, as it turned out, it was the weapon he preferred to carry most of the time—German of course—the Walther PPK. That pistol was chambered in the 7.65mm round, or .32 ACP to us Americans.

Walther has an amazing lineage of firearms, and the PP series dates back to 1929. Hitler’s PPK was manufactured in 1931. They were reliable handguns, used for both police and civilians alike, as they were small and highly concealable. At the start of the war, in addition to the police, they were issued to members of the German military, Luftwaffe pilots, Nazi Party officials, and of course Die Führer.

His suicide, with one bullet to the head, took place at his Fuhrerbunker in Berlin as the Soviet juggernaut was rapidly advancing from the east, and our guys, along with the British and French, from the west, north and south. Berlin was surrounded, and, like the rest of Germany’s cities, was in ruins. 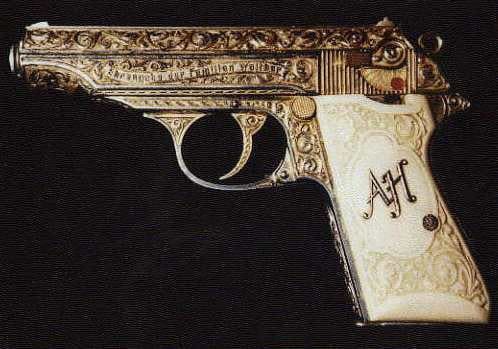 Wonder what “AH” stands for?

The Walther PPK is probably most easily recognizable as the favorite firearm of the fictional British secret agent James Bond in countless books and films. Ian Fleming, the creator of the Bond character, was influenced by the weapon’s popularity amongst actual MI-5 and MI-6 operatives.

Yes indeed, it seems that the Bond character, while highly colorful and miles away from reality, was true to form, inasmuch as that he carried the gun in much the same manner as the real agents of the sister government organizations.

The weapon is suitable for concealed carry, hence its popularity with the German undercover police, the Polizeipistole Kriminalmodell (the Police Pistol Detective Model), being carried by approximately 85% of their plain-clothed officers. Oftentimes the name of Polizeipistole Kurz (Short Police Pistol) is used, but the interpretation is not entirely certain.

The PPK is definitely smaller than the standard PP and has a shorter barrel length, and shorter grip with less magazine capacity. The PPK is a double-action semi-automatic pistol that has been widely copied the world over. The design of the weapon is clearly seen in such side arms as the Russian Makarov, the Hungarian FEG PA-63, as well as the outstanding CZ50 manufactured in Czechoslovakia.

After the end of the war and during Germany’s industrial build-up following the Berlin airlift, Walther reintroduced the PPK in the form of the PPK-L, a light-weight variant using aluminum alloy frames rather than the former all steel frames found in the original PPKs. These newer models were chambered in the 7.65 Browning (.32 ACP), as well as the .22 Long Rifle, due to the increase in obvious recoil from the lighter weight frames. All the rest of the original features found in the PPK remained in the new weapon.

These included the brown-plastic grips with the Walther banner, 7+1 round magazine capacity, loaded chambered indicator, the highly-polished blue finish, as well as the standard lanyard loop for police officers needing that particular item. The “Made in West Germany” stamp appeared on the weapons during the 1960s. Unlike the 1950s productions series, the ones produced during the 1960s had the dates of manufacture, shown as month/year, stamped on the exterior of the barrel. Prior to that they were stamped on the slide. 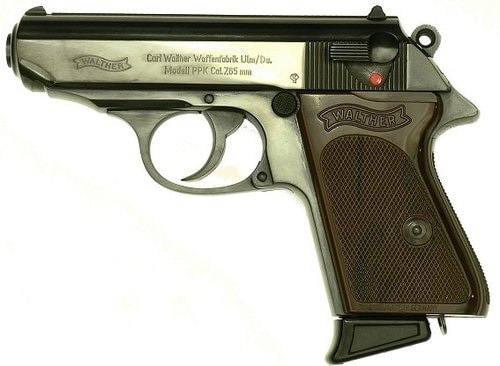 The design years later, still pretty much the same.

Walther weapons are used by undercover and intelligence services the world over, but one would be surprised to discover that they are also used by members of Mossad’s Division Seven agents in Israel.

Many of their elite personnel are issued silenced versions of the tiny Walther P-22, chambered in .22 Long Rifle. Division Seven operatives are entrusted with the protection of the State of Israel, as they are tasked with eliminating violent terrorists who pose direct threats to their tiny Middle Eastern country.

That protection is often referred to as Aliyah, the Hebrew word meaning ascent, and interrupted to include the use of force for their survival. The silenced Walther P-22 is the ideal weapon of choice for close-in, quick and quiet applications.

In an interesting side-note to Hitler’s preferred weapon of choice, it should be noted that he actually carried an American revolver for many years. It was a Smith and Wesson Ladysmith model, and he was oftentimes seen carrying the sidearm.

He stopped carrying that revolver the day after Franklin Roosevelt declared war on both Japan and Germany following the December 7, 1941 attack on Pearl Harbor. He was then seen with his Walther PPK. Insofar as where those particular weapons may now be located so many years after Hitler’s demise, there are no clear-cut answers. Some theorize that the Russians took possession of the PPK, although they have remained largely quiet on the subject, and it had been bantered about that the Smith and Wesson may have ended up in the hands of an American army colonel.

Photographs of a PPK were released by the Kremlin some years ago with the indication that it was indeed the weapon used by Hitler, but proof of its authenticity was never made available.