Rifle Golf: Finally, a game for when hunters retire...

It is a sport of measure and precision.  One that emphasizes words like technique and focus and versatility and, to that end, it represents a rare opportunity in the realm of Sportsdom: a physical activity wherein any man, regardless of mental acuity or physical handicap, willing to put in the time and energy can become an expert. Yeah, it may be a little snobby at times but hey, it earned that right.

See when we put it like that, it’s almost as if golf and target shooting were separated at birth—at least until now.

Just a quick trip north of Salt Lake City is Spirit Ridge Rifle Golf, a riflemen’s playground on 10,000-acres of rolling landscape that truly embodies Utah’s Big Sky country.  And, as the name may suggest, since 2005 they have been the only club in the US that plays what could very well turn into the shooting world’s latest and greatest leisure activity, Rifle Golf.

Rolfers (or is it “Riflers”?) tee-off from four different, terraced shooting stations complete with shooting benches, awnings, picnic tables and ample seating for both triggermen and onlookers.  Golf carts have been replaced by ATVs, certainly a more suitable means of conveyance when you consider the 6-miles of “un-manicured” greens comprising each course of fire. The “clubhouse” is simple to match simple tastes: locker rooms, showers, bathrooms and basic amenities. 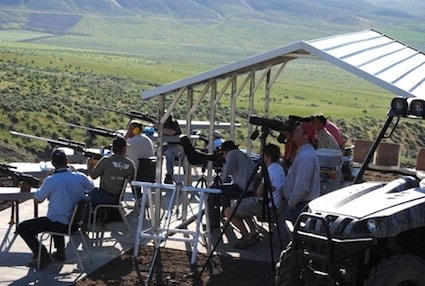 Shooters get to choose between two courses: the classic course—recommended for first timers—and a more challenging masters’ course for seasoned marksmen looking to step out of their comfort zone.

Bet you’re just dying to know how it’s played?  Well, pretty much how you think it would be.

The course is exclusively for big-caliber rifles, a nice change of pace seeing as shotguns and pistols usually get to have all the fun when it comes to sexy shooting games.  Targets range from 175 to 1,200 yards out and take advantage of the potentially exasperating slopes and angles, characteristic of North central Utah’s vistas.  Puzzling course setups are what truly separates Rifle Golf from just another distance shooting competition—probably the games most important import from golf golf.

Just like in real golf, each “hole” is assigned a par value that corresponds to the courses’ degree of difficulty.  Shooters fire an agreed upon number of rounds and can cut strokes from their score by putting lead on steel spinners set into animal silhouettes that indicate the beast’s vitals.  Parties consist of between four to six shooters with a guide/caddy who assists with locating targets, scoring, discussing the weather etc.

As you may be thinking, Rifle Golf sounds like a great way to prep for big game hunts and, the fact that the courses feature varying conditions and angled or obscured targets says to Guns.com that Spirit Ridge’s outfit has that little extra something when it comes to mimicking the challenge of actually taking big game at long distances.  The course’s website claims that Rifle Golf is the end result of a journey to provide outdoorsmen with the most realistic, exhilarating and educational target shooting experience in the world.

Course guide Jeff Petersen told reporters, “We’re a one-of-a-kind shooting facility.  While there are plenty of places to shoot targets, there’s no other operation like this. Nobody else has a range of this size and variety.” 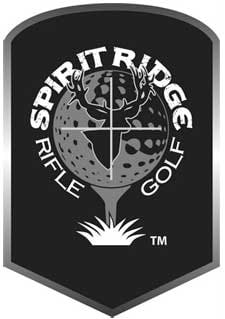 When it comes down to it, for a sizable portion of shooters, guns and golf both scratch the same itch—something to fill the listless hours that’s tricky, relaxed, outside and with friends.  We’re happy to report though that one of the things Spirit Ridge didn’t bring along with them from the club-and-ball version of the game is the price. A round costs $50 (that’s like municipal course greens fees) and discounts are available for more frequent visitors. Spirit Ridge also can cater to larger groups and regularly hosts tournaments.