Five Steps to Prevent Gun Shyness in Your Dog

A band of tight flying blue-winged teal buzzed down the far shore of the small lake. I whispered to my hunting buddy to get ready. Our pair of Labrador retrievers trembled with excitement.

Just as I had predicted, the teal flew to the west end of the lake, turned and headed up the north shore straight for our set of three-dozen decoys.

When the shooting ended four teal bobbed in the decoys belly up. I sent my chocolate Lab, Peggy, for the first retrieve. My hunting partner did the same with his dog. However, his young dog never responded to the command to retrieve. Instead, she hovered by his side trembling.

I queried my buddy about the experience of his dog. He quickly stated, defensively, that he believed training for a Lab should not start until it was a year old. And that young dog’s training had started that morning. My buddy received his reward for his training methods, or lack thereof, immediately. His dog proved to be mortified by the gunfire, i.e., gun shy.

Peggy retrieved all four of our teal and happily accepted the love and praise I poured over her. At my command she took her place in the boat again and eagerly awaited the next flight of ducks. My pal’s dog didn’t leave his side all morning. 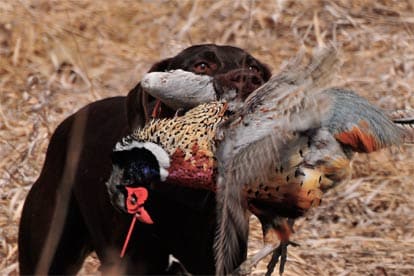 Over 45 years of duck hunting, I have witnessed the aforementioned scenario dozens of times. Duck hunters love retrievers. However, even in these days of hyper information, many hunters still believe that hunting dogs either have it or they don’t. By their very nature, retrievers have the innate ability and desire to want to retrieve game. However, their desires and initiatives to retrieve game may not necessarily match those of us duck hunters. We want our dogs to retrieve on our command rather than some later point in time when the dog just feels like it.

A retriever can be a very good companion and hunting dog, yet still be gun shy, which greatly reduces its effectiveness as a hunting dog. The following are several steps every retriever owner can take to keep his dog from developing gun shyness.

Training with your new puppy begins immediately, preferably at 7 or 8 weeks of age. Your puppy should have developed some sense of connection with you after you’ve picked it out of the litter. We all love puppies, and the more puppies we have to choose from, the more we sort through the litter trying to determine which puppy would best match us. Puppies are already socialized to a degree, first with mom and the littermates and secondly with the owner of the mother. If the owner has not spent much time with the puppies and you can tell it, do not buy from that owner. The quicker puppies are socialized with humans, the easier they will be to train. Save yourself a great deal of heartache and choose only puppies that show signs of being socialized. If they run from you squealing in fear to hide, you know there are problems. Both mom and puppies should approach you to play and investigate. 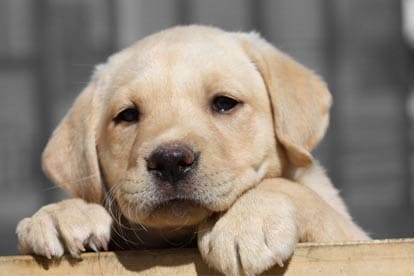 Once you have made your choice of a puppy, commit to a 72-hour regimen of staying close to the puppy and not letting it out of your sight. The first 72 hours the puppy is in its new home will determine what kind of relationship the two of you will have for the duration of your time together. Remember, the puppy is highly stressed from being separated from its mother and littermates. Also, it is in new surroundings and is now around unfamiliar people. 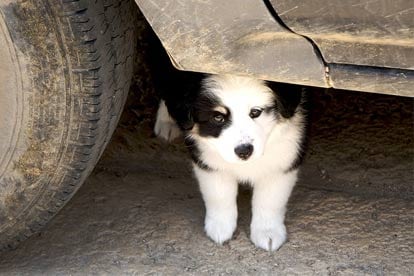 As soon as you arrive home with the puppy, begin developing the bond between you and it immediately. Do not allow others to play with the puppy whatsoever. At the most, others should only pet the puppy briefly because you want the puppy to key in on you and only you. You will be its master for life. It will learn from you and learn to trust you and rely on you. Establishing a trusting bond quickly is paramount to your success. Never intentionally scare or unduly frighten the puppy. 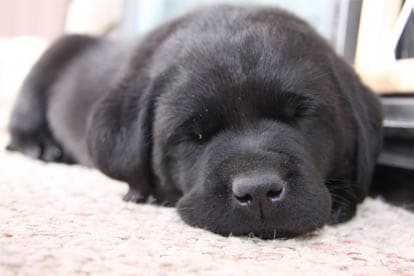 After the initial 72 hours, your bonding period has lapsed and your puppy should be at ease around you. It should readily play with you and understand the fact that you feed and water him. Those times are superb to pet the puppy and socialize with him. It may not seem like it, but training has already begun. However, it is now time to start intentional training to produce the kind of hunting partner you want. 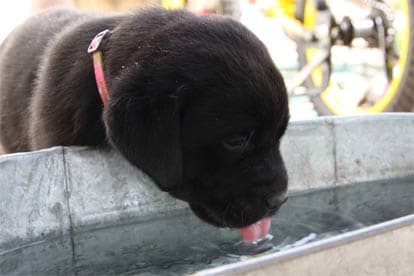 The first things you want to teach your puppy are its name and the commands, sit, stay and come. They are all instructions that soak in with repeated repetition. Keep sessions short at first and gradually lengthen them as the puppy learns. There are many books and videos available to help with the process. However, these basic commands are building blocks for more to come.

When your newfound partner has satisfactorily mastered the initial commands, it is ready for further training. I have found it very useful to begin using louder noises when I start to teach a puppy to retrieve. Let the dog play. Get it excited. Toss a ball or a training dummy a short distance. The puppy will naturally chase it. Call his name and tell him to come. All the while clap your hands and scurry backwards rapidly. Stop suddenly as the puppy comes closer to you. Low and behold, your puppy has completed a retrieve while you were making loud noise. It didn’t notice because it was so excited. Continue the process until you can replace the hand claps with a starter pistol or a .22.

After the maturing puppy is confident with the slightly noisy training, advance to water training with longer retrieves. Toss the training dummy high and long so the dog can watch it and concentrate. As the dummy begins to fall to the water, fire a small gauge shotgun, such as a .410 or 20 gauge. Watch for any fear or restlessness from your dog. If there are no problems, command the dog to fetch the dummy. When the dog returns with the dummy, give him the usual praise, but approach him with the shotgun in hand. He will smell the burned powder, see you with the gun in hand and soon understand that it is all part of the process. 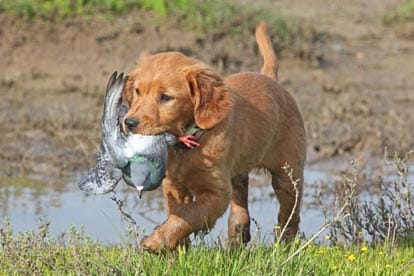 Repeat, repeat, repeat. It is fun for both you and your dog. Every session makes your dog steadier and you more confident in his abilities. The good news is that you have a lot of years ahead of you to enjoy a dog that will never fail because of gun shyness.

My buddy showed serious signs of embarrassment. His $2,000 Lab never retrieved a single teal that morning. My $250 Peggy performed like a trooper. It’s not the price of the dog that makes it a steady, lover of the hunt. It is the time and training given by the master.