Highpower Competitions: Like Combat Riflery, but No One Is Shooting Back

If you like games where you’re constantly flirting with Murphy, then Highpower is the competition for you. Just like a baseball game can be decided in the bottom of the ninth with a single pitch or swing of the bat, every shot you send downrange in Highpower can put you on or off the winner’s list.

So, any single little thing that goes wrong…well, you know what they say about Murphy.

Regardless of how superbly you can shoot, you can finish dead last in a match by fumbling with a rapid fire reload; failing to notice a sudden change in the wind; not bringing extra ammo or a spare extractor, or not being prepared for unexpected weather; dust blowing in your eye; a mystery flyer; your neighbor’s hot brass landing on your neck during your trigger squeeze – the list is endless. And frustrating. 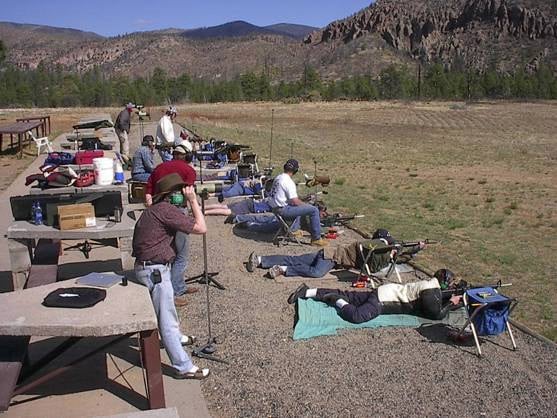 There is virtually no monetary profit in the sport, unless you become a national champion; then you can write “how-to” books or design and attach your name to shooting goodies to sell to other competitors. The most you’ll get in Highpower is a plaque or a pin, a bauble to hang around your neck or maybe a free rifle.

So, why bother with it? I was hoping you wouldn’t ask.

Highpower and Long Range are the only shooting competitions I’ve been “serious” about, in the sense of putting into them a lot of time, study, effort, practice, money and, at first, an emotional attachment to the outcome. I quickly dropped the latter for mental health reasons, and Highpower became a competition against myself. Of course I compare my scores to that of friends and other shooters but, really, I’m out there to shoot better than I did last time, to figure out the wind, to shrink and center my groups, to taunt Murphy. 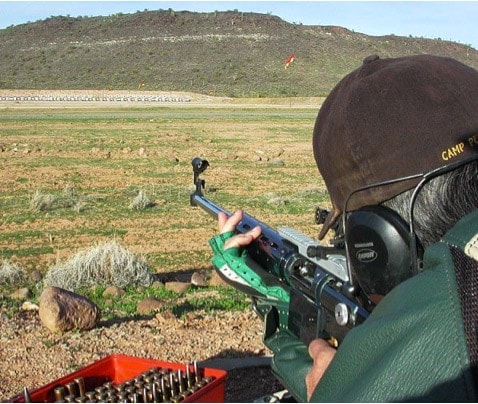 Highpower doesn’t require wealth, but it ain’t free, either. Cheap, cheesy gear will not allow you to be competitive even with yourself, much less with anyone else on the firing line. If your rifle/ammo cannot keep shots in the 10 ring, how can you know whether all those 7s and 5s are due to the rifle/ammo or your own poor skills? You can’t. And how can you tell if you’re improving if the rifle doesn’t shoot better than you? You can’t. 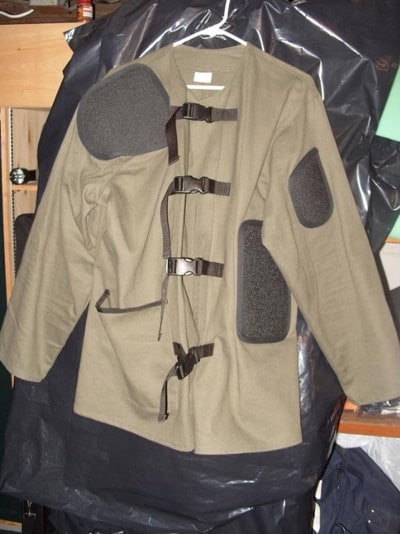 Competing in, or seriously testing your skills in Highpower requires that you invest some money in an accurized rifle and match ammo, a decent spotting scope and a few other accouterments.  Examples of low-end prices include match grade AR-15s that start around $1,200 and “good-enough” spotting scopes at $200 (you’ll also need a scope stand tall enough for shooting offhand, about $175). A shooting coat provides stability, and you’ll very rarely see a shooter without one; about $150. Those are your major expenses. Of course, used stuff abounds as shooters upgrade their equipment, so you don’t have to pay full price for new gear.

Many Highpower shooters started as Juniors in their local gun club’s Smallbore (.22 rimfire) programs, then graduated to Highpower. Wickenburg, AZ has the only high school Highpower Juniors program left in the country that I know of, and those youngsters are serious competition.

I was lucky to start with a Navy team back in the ‘80s, which supplied everything I needed to shoot their National Match (NM) M14s. When that ended and AR-15s started getting heavy barrels and faster twists to shoot heavier bullets, I bought one because the AR is considerably less expensive than a NM M1A (civilian M14). I accrued other gear one piece at a time and upgraded as I was financially able. 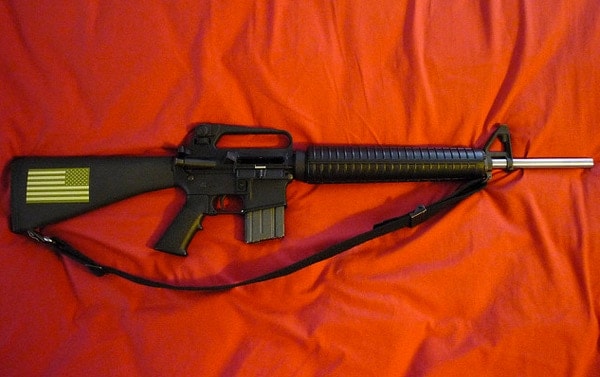 If money is an insurmountable obstacle for you, there is an alternative. If you want to enjoy Highpower without an earnest outlay of cash, shoot a surplus rifle in Civilian Marksmanship Program Vintage Military Rifle matches. The rifles aren’t expensive, the ranges are a short 100 and 200 yards, some matches require only 30 rounds of ammo and all you need are a piece of carpet and whatever spotting scope you already have. 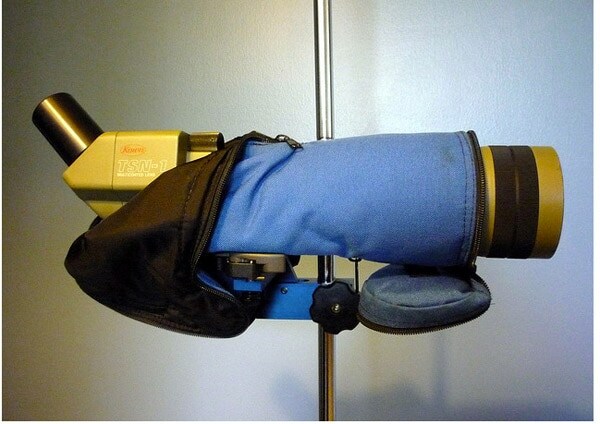 The authority for shooting formal Highpower competitions is the NRA, and the rulebook is detailed and specific, but here’s a rundown of the basics:

The rapid fire stages require reloading during firing. In this same match sometimes fired with 80 rounds, you’ll shoot the rapid fire stages twice, and 20 rounds in 20 minutes in the offhand. As you no doubt surmised, the course of fire has its roots in combat riflery. 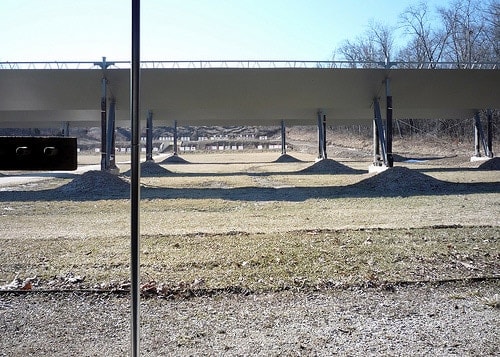 For small clubs and ranges that only go out to 100 yards, there are “reduced” targets available that simulate (have the same apparent visual size as) the full-size targets. At all distances, by the way, the target appears to be no wider than the Service rifle front sight blade.

You earn a classification according to your scores; and you win (or not) within your classification, as well as within the overall match. Classifications are Marksman, Sharpshooter, Expert, Master and High Master. 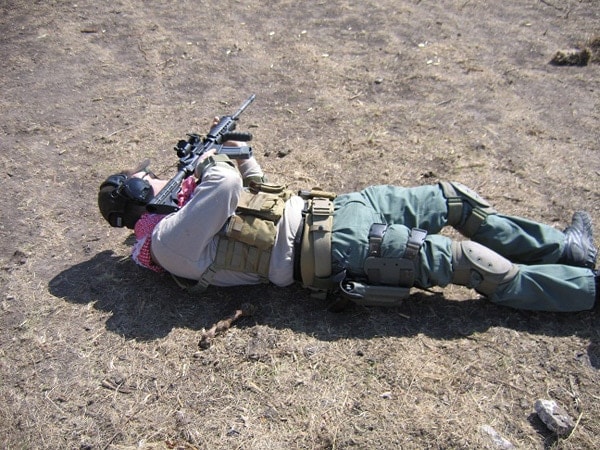 Classifications go away in the Excellence In Competition (“Leg”) matches, where it’s dog-eat-dog, and the top 10 percent earn 3 points toward the coveted “Distinguished Rifleman” award. “Legging out” takes years – and decades, for some – and shooters wear their Distinguished pins with pride.

Rifles are divided into two categories, Service and Match. Service rifles include the M1 Garand; the M14/M1A; and the M16/AR-15. There are pros and cons to each of these, and it’s a matter of “pick yer poison.” For example, the AR-15 is cheaper to buy and feed than the .30 calibers, but its lighter bullets are more susceptible to wind drift. All can be made to shoot very accurately, but rules require they have iron sights, triggers no lighter than 4.5 pounds, and any accurizing tricks must not alter the silhouette of the basic “as-issued” service rifle. 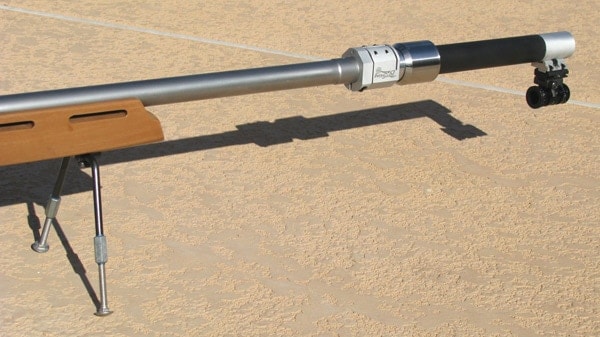 Rules for Match rifles are broader, allowing things like longer barrels or “bloop tubes” – tubes that extend beyond the muzzle to increase the sight radius – micrometer sights, light triggers and such. The latest incarnation among Match rifles is the “tube gun.”

Who doesn’t like getting two-fers? Maybe that gives Murphy twice the opportunity to futz with your shooting, but the fun is worth it.