Who Were the Colonists and What Were They Firing?: Guns of the American Revolution

We recently celebrated Independence Day. July 4, 1776, was the day we declared our independence from Britain, but the battle for the freedom we sought raged on for seven more years, until 1783.

Those early colonists, however, taking the bull by the horn, published their independence in the newspapers of the day right away. They didn’t wait for that remaining seven-year battle to end, they continued to declare their independence while in the midst of the battle. 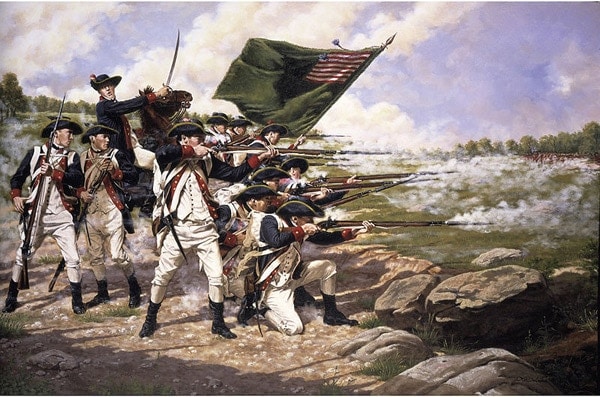 Who were those colonists? Compared to the rigid structure of the English military during the American Revolutionary War, our American fighting men were enormously outnumbered, ill equipped and, for the most part, were made up of volunteers. That volunteer force consisted of farmers and fishermen, bakers and bankers, physicians and potters, and husbands and brothers. As a matter of fact, even President George Washington only wanted to be a farmer.

He had no political or military aspirations at all, but the quickly unfolding events of the times thrust him into the history books. These were not fighting men, but simply very brave and patriotic individuals who collectively believed in freedom from tyrannical rule. If you truly want to put a face to “Freedom Fighters,” you need look no further than those early American colonists.

The weapons that were used during the war consisted of a wide range of armaments, but the muzzle loading flintlock musket, some with attached bayonets, and cannons of course, were the primary arms. Other weapons consisted of wide assortments of rifles and pistols, swords and various other cutting weapons. But the most commonly used weapon was that smoothbore flintlock musket with calibers ranging from .62 to .75, approximately equivalent to 16 to 11 gauge shotgun shells.

There was no rifling in the muskets to spin the ball, hence the rounds sometimes didn’t fire straight and true. Both ball and shot were used, or in some cases a combination of the two. They used black powder. For that reason the balls were oftentimes undersized so that troops could, with practice, fire quickly, seating the next load down the barrel within a matter of seconds without fear of fouling.

The primary British musket used by their military folks was the Brown Bess, a .75 caliber that used .69 caliber balls. The French musket, the Charleyville, was supplied to the colonists. It was a .69 caliber weapon, but the Americans fired .65 caliber balls through it for that same fouling issue with black powder.

Those muskets had long barrels, some from 42 to 44 inches, and long triangular shaped bayonets could be fitted at the ends of the barrels. The bayonet was actually a type of replacement for the ancient pike used to defend against cavalry troops. Paper cartridges were used in order to speed the loading process and to reduce the slight risk of loose black powder being ignited by sparks.

Wooden dowels right around the same diameter of the balls were used as formers to make paper tubes. The ball and black powder was then put into the paper tube, or sleeve, and then it was sealed, tied with a small length of string, or in many cases the end of the paper tube was simply twisted three or four times with the rifleman’s thumb and forefinger. Some folks wet their fingers in their mouths before twisting the paper as it seemed to make the twisted paper adhere better. 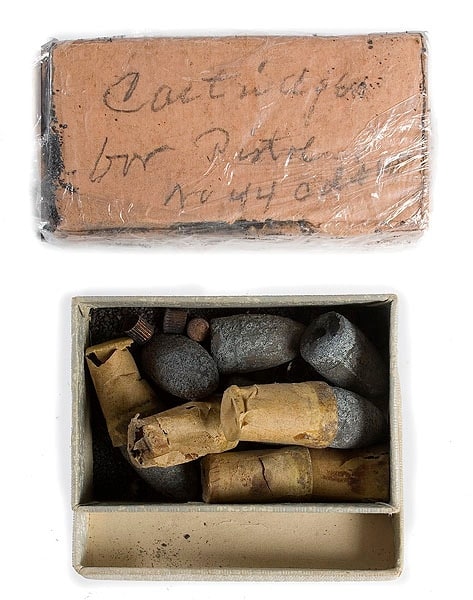 To load one’s musket the soldier would open his cartridge box, although many of those boxes remained open during the extraordinary heat of battle, grab a cartridge, bite off the end to expose the black powder, pour a small amount into the pan of the lock, close the pan, drop the powder and the ball into the barrel, remove the long rammer from the barrel (although many rammers would remain close at hand rather than attached again at the bottom of the rifle’s barrel, this also due to the exigent nature of a fight for your life), ram the ball and powder hard down into the end of the barrel, and then aim and shoot after cocking the lock.

All of that was accomplished in mere seconds, and in the stress of armed conflict, with trembling fingers and a heart rate someplace off the charts, it must have been something so out of the ordinary as to be beyond the realm of what most people could ever imagine. They were expected to fire one round every 15 or 20 seconds for four or five minutes at a time, and then the barrel had to be cleared because of that black powder fouling problem.

The muskets did not have gun sights, just the slight bulge from the bayonet lug near the barrel’s muzzle, but the soldiers used the top of that lug as a rudimentary sight. Some muskets from that era have been found to have gouges in the tops of the barrels, raising a sliver of metal that acted something like a rear sight.

The ball would oftentimes come out the end of the barrel spinning in odd directions due to the gases escaping unevenly behind it. There was no guarantee that the ball would fly straight, and after 75 yards or so it was almost impossible to hit a man sized target with any regularity. To compensate for that, muskets whenever possible were fired in volleys sometimes 18 or 20 at a time thereby ensuring the greater percentage of hits against enemy forces arrayed against them. 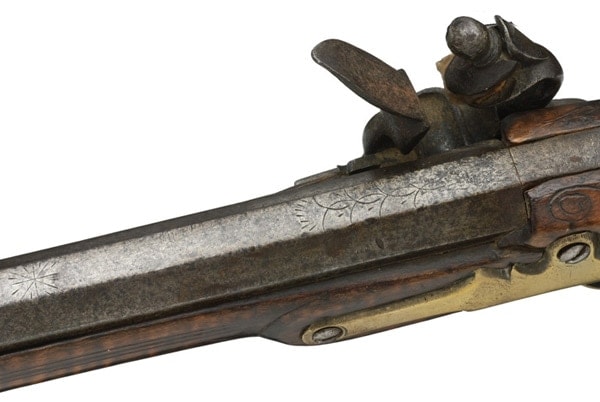 Rifles were also used during the war. While far more accurate than the muskets, loading took longer, approximately 30 seconds or longer, with some rifles taking well over a minute to load. The colonists were in danger of running out of nearly everything, but when the French joined them in their fight against the British, they supplied rifles, muskets with bayonets, uniforms, boxes of ammunition and thousands of other supplies. 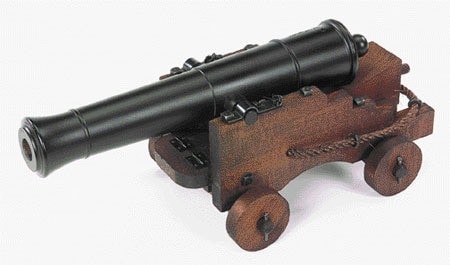 Cannons were used throughout nearly all of the battlefields during the war, and whenever they were utilized against infantry units unsupported by their own cannons, they invariably lost the fight with large loss of life. Most cannons used in the war were 3, 4 or 6-pound guns. They were mounted on wooden carriages.

These muzzleloading cannons were all smoothbore guns and smaller than the ones used in later wars. Some of the 3-pound guns had iron legs that they rested on and were referred to as “grasshoppers” due to their tendency to jump when fired. Sometimes 12-pound guns were used in the field, but that was not usually the case. There were larger guns, but those were normally mounted on ships and in fortifications. 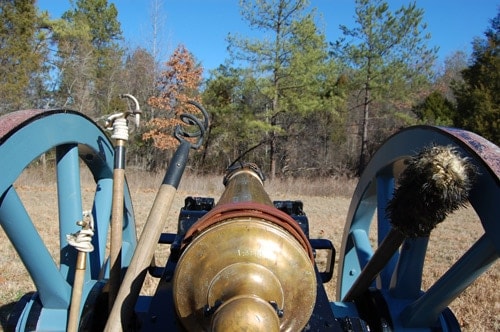 Most cannons fired solid cannon balls, varied smaller shot, or once in awhile shells. Shells were hollow iron balls that were filled with black powder and fitted with fuses that were lit just seconds before the gun was fired. The shot used could be any combination of musket balls, buckshot, grape shot, or just about anything on hand.

The grape shot was typically iron or lead balls around one inch in diameter. Cannons could range out to several hundred meters. A 3-pound cannon, as an example, had a range of about 800 meters using a cannon ball, or around 200 meters with the grape shot, as they were fired in clusters of several balls at once. Loaded with shot and at relative close range a single cannon round could potentially destroy an enemy company. 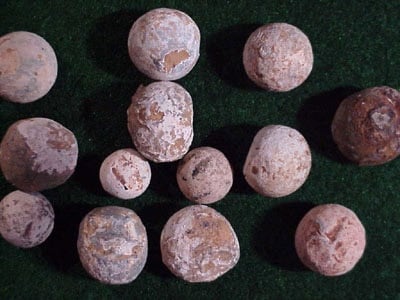 The cannons employed by our colonists were manufactured in France, Spain, Portugal and Sweden, as well as numbers of captured British examples. Those employed by the British were primarily of English origins.

When we read about what the colonists managed to do under extremely adverse conditions while using weapons that would make modern day military firearms enthusiasts quiver if they somehow were faced with being outnumbered up to ten to one, while using those weapons of the day for self-preservation, it is truly amazing. I for one have to scratch my head in disbelief and look upon those wonderful people with absolute awe and admiration.