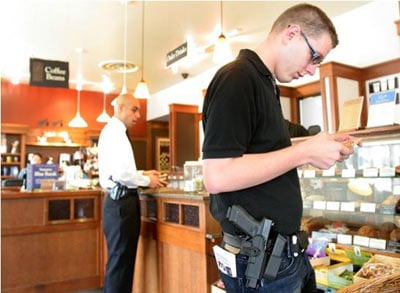 In response to the growing trend of individuals openly carrying unloaded handguns in California, state lawmakers are trying once again to prohibit the practice. California politicians have tried to pass similar bills on four previous occasions. But as defiant gun rights activists are increasingly organizing and taking to the streets with unloaded guns in toe, lawmakers are redoubling efforts to outlaw the practice.

Although it’s illegal in California to openly carry a loaded weapon (a practice generally known as constitutional carry), no current statute forbids the open carry of unloaded handguns. As a result, Californians in favor of laxer gun laws have taken their cause to the streets by organizing at coffee shops and other public places with their unloaded guns prominently displayed.

AB 144, sponsored by Assemblyman Anthony Portantino (D-Pasadena), was approved in the California Assembly in May, and subsequently cleared its first Senate hurdle in June when it garnered approval from the Senate Public Safety Committee.

Said Portantino of the measure, “There are problematic issues of guns carried in public…This loophole should be closed. You do not need a weapon to buy a cheeseburger or a cup of coffee.”

It appears law enforcement and gun control advocates are on Portantino’s side, as the state Police Chiefs Association has backed the bill amid fears that guns carried openly in public pose a risk for police officers. Emeryville Police Chief Ken James testified on behalf of the bill, saying “It puts our officers in high-risk situations unnecessarily.”

The proposed legislation has drawn outcry from the National Rifle Association and gun rights groups, constituencies that have long been frustrated by California’s tough gun control laws and who view the bill as a violation of citizens’ Second Amendment rights. Edward Worley, an NRA lobbyist, observed that citizens are being forced to carry unloaded guns because the State of California issues so few concealed carry permits.

Said Worley, “If you ban open carry, the next logical consequence is that the court is going to find that you must issue concealed weapons permits…People have a right to carry firearms unloaded. The Supreme Court hasn’t walked down this road yet, but they will.”

Indeed, the Supreme Court may well have to weigh in, as neither side seems willing to give ground. As the Ventura County Star reported, Opencarry.org has organized meetings among gun rights activists in which individuals congregate at predetermined locations while openly carrying firearms. Presumably, the meetings are an effort to expose the public to the practice of open carry in an effort to put a new face on the practice and allow citizens to become more comfortable with the idea. These events have regularly made headlines in California in recent years, culminating in legislative showdowns similar to the one currently underway.

Portantino hopes the new legislation will put the issue to rest: “We don’t want weapons to become part of political expression…There is a proliferation of weapons on Main Street, California. That’s something that average citizens don’t want.”

The bill would make exceptions for law enforcement officers, military personnel, veterans participating in parades and other events, hunters and individuals inside licensed firearms stores. However, these exemptions are unlikely to be enough to satisfy Second Amendment proponents in California, a group who has long found its message in the cross hairs in the Golden State.