Video: It's Back: the Steyr Scout

The Steyr Scout is the rifle of Jeff Cooper, who is most famous for inventing the modern technique of handgun shooting.  Apparently, that makes sense.

No but yes, he was a shooting revolutionary.  Cooper was a Marine lieutenant colonel, and a very good shot.  It’s because of him that many shooters are familiar with the Weaver stance, enumerated conditions indicating a weapon’s ready-state, and have a predilection towards large calibers. 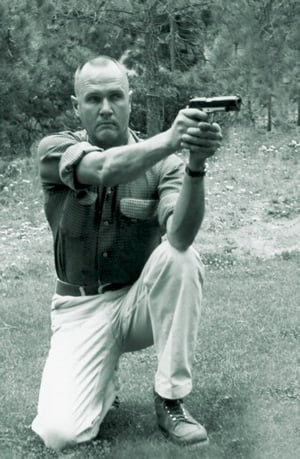 His position on the big-bullet-small-gun stance carried over to rifles, too, with the Scout.  It really was one of the first of its kind, the Scout class of rifles.  The idea is that you put one of the biggest of practical calibers, in this case .308 Winchester or 7.62x51mm NATO, up front with your recon troops; ideally they shouldn’t shoot at all.  But if they have to, it should fucking count.

It was both a military-class scouting rifle as well as what, in his opinion, was the best all-around rifle.  His specifications were exacting: a bolt-action rifle chambered in .30 caliber, less than 1 meter in length, less than 3 kilograms in weight, with iron sights, a barrel fluted for accuracy and weight (in this case, 19″, so just barely a carbine by a technicality), a forward mounted optical sight, and a sling (sight and sling not included). Cooper said, “A general-purpose rifle is a conveniently portable, individually operated firearm, capable of striking a single decisive blow, on a live target of up to 200 kilos in weight, at any distance at which the operator can shoot with the precision necessary to place a shot in a vital area of the target.”

Cooper oversaw Steyr in their manufacture of the original Scout.  It was made to his specification and then some.  In making the Scout with a polymer stock, (the’d have to to beat the 3kg ceiling) they were able to add not just an integral front bipod, but an additional 10-round magazine in the butt of the stock.  Hey, it was gonna be hollow, anyway, right?

The Steyr Scout would eventually be made in other calibers, .223 Winchester/5.56x45mm NATO, .243 Winchester, 7mm-08 Remington, and .376 Steyr (keeping with Cooper’s caliber requirements as always) as well as with fancy wood stocks, polymer stocks of all colors, and pretty laminate stocks.  Gray survival stocks just… went away.

But Steyr’s bringing it back, baby.

In it’s original configuration, with that battleship finish, you too can buy the quintessential modern bolt-action all-purpose rifle designed by Jeff Cooper as he imagined it himself.  ‘Course, that level of quality does come at a price, but we are talking about Jeff Cooper’s rifle here; you should be able to get one in it’s original gray, as well as black, for less than $2,000.