The Confederate Revolvers of the Saint Albans Raid

In the fall of 1864, 21 Confederate soldiers under direct orders from President Jefferson Davis, posed as Canadian tourists and infiltrated across our northern border into Saint Albans, Vermont.

Their orders were explicit. They were to rob financial institutions to enrich the Confederacy’s treasury, create uncertainty in the Union, hence forcing them to send troops from vitally important regions in the south to the Canadian border and thereby causing friction and a political rift with Canada. On all accounts the Confederate soldiers were highly successful. 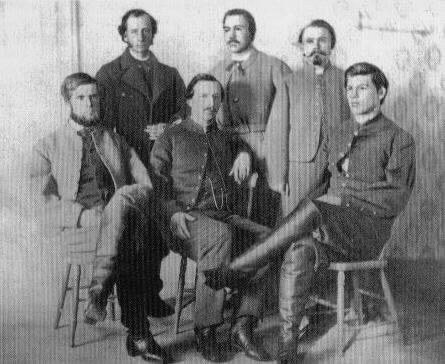 On October 19, 1864 they simultaneously robbed three banks at gunpoint, forced the tellers to swear allegiance to the south and made off with $208,000.00. That may not seem like a whole lot by today’s standards, but back then it was huge, worth well over a million dollars. The 21 raiders were led by Lieutenant Bennet H. Young, a former prisoner of war. 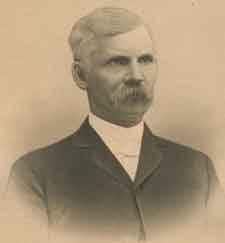 Their average age was 23. They herded the local residents into the town square and stole their horses, escaping successfully back north into Canada, where they were arrested by Canadian authorities. Because of the subsequent rift with the United States, however, the raiders were released, and only $88,000 of the original money was returned. 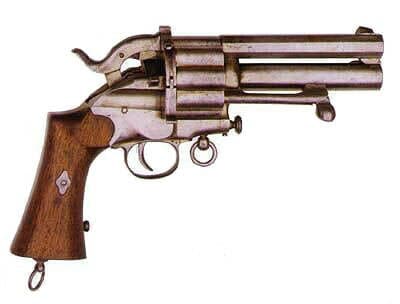 While some of the accounts are at best sketchy, it seems that in order to blend in and not draw attention to themselves while posing as tourists, they were armed only with revolvers hidden under their coats. According to somewhat obscure Canadian reports of the incident, three of the men may have carried LeMat revolvers, but the calibers are not entirely certain.

They were either .42 or .36 caliber, but one of the weapons was thought to be a smoothbore version of the gun tooled to fire 16-gauge buckshot. The LeMat was invented by Dr. Jean Alexandre LeMat, a long-time resident of New Orleans, Louisiana. The weapon was used by Confederate forces on a limited basis during the war, with approximately 2,900 being produced.

The one feature of this weapon that set it apart from other Civil War era handguns was that it had a nine shot cylinder, which revolved around a separate barrel of larger caliber than the actual chambers in the cylinder. The central barrel was sometimes smoothbore and was able to function as the aforementioned short-barreled shotgun. It was sometimes referred to as the Grape Shot Revolver. The shooter could simply flip a lever on the end of the hammer, thereby selecting whether to fire from the cylinder or the smoothbore barrel. This outstanding feat of engineering was later produced to fire the lighter .35 caliber round, with a .50 caliber (28 gauge) smoothbore barrel. 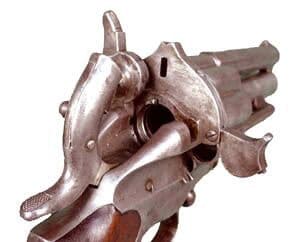 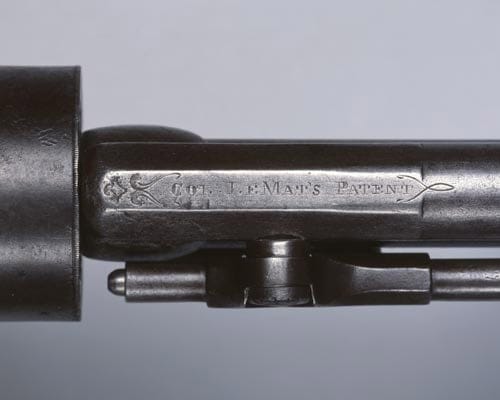 We sometimes think about all those many years ago and believe that those folks during the Civil War must have been somewhat unsophisticated. But then, when we study an operation of this magnitude with all its many unknown variables, we come to realize that it was a tremendously complex and dangerous military mission that took place far inside enemy territory, and would be something akin to a Seal Team Six operation in today’s military. Add to that the complex LeMat pistol that at least three of the 21 Confederate raiders carried, it makes one wonder just how unsophisticated they may have been.

Of the remaining 18 raiders, 11 were said to be carrying models of the 1851 Confederate Navy .44 caliber revolvers. They were produced with brass frames due to the South’s limited supply of steel. Its features included blued octagonal barrels, walnut grips, brass trigger guards, and blued cylinders. These were essentially copies of the Colt 1851 Navy revolver produced by Edward Spiller and David Burr, along with Lieutenant Colonel James Burton. A total of 1,500 brass framed Spiller and Burr revolvers were manufactured during the war. 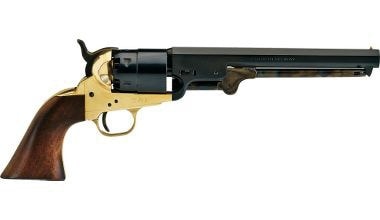 Two other members of the Confederate detail were armed with copies of the 1862 Dance Brothers revolvers, which were in themselves copies of the popular Colt Dragoon pistols. They had unique flat-sided steel frames without the standard semi-circular recoil shields. 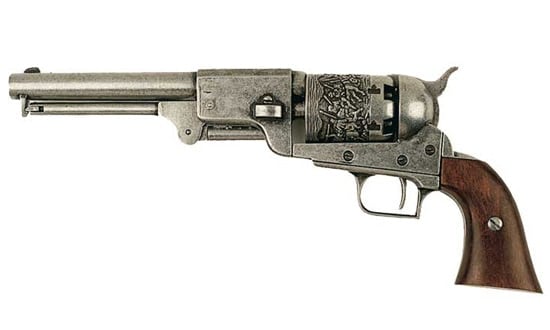 What is certain is that even though the Civil War was nearly 150 year ago, the level of sophistication for some of their military operations was truly astounding.