It’s not enough to practice for the zombie apocalypse with paper targets.  Preparation is more than a mindset, it’s a way of life.  Ideally, we’d love to get ready for the zombie apocalypse with actual zombies, but the legalities, not to mention, the unbridled chain reactions leading to the complete destruction of all life as we know it, of creating a small batch of zombies to practice with are absolutely impossible to hurdle. 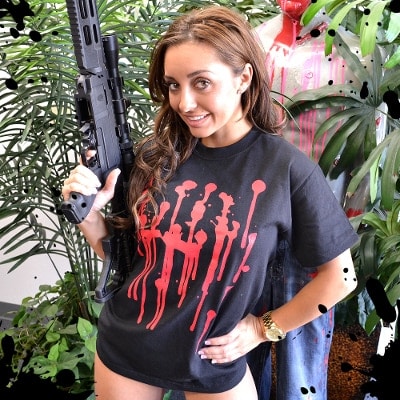 But that doesn’t mean we should only practice with paper targets!  Until we make robotic zombies that have all the strengths of the unliving but the cool, unerring programability of machines, we will have to live with simulated zombies.

Actually, now that we’ve floated robot zombies, we’re gonna have to come down against their creation; honestly, that’s just asking for trouble, it’ll no doubt lead to a full-scale revolution of inhuman monstrosity that, you know, maybe a few thousand survivors will manage to rally against, preserving the remaining hopes for all mankind, maybe they have a messianic leader who knows of a cure-slash-superweapon against robot zombies, but no, no we’d much rather just see life-size mannequins that bleed gore and maybe explode.  That’s a much better prospect for zombie apocalypse preparedness.

Good news!  Zombie Industries makes exactly that!  When we showed the Professional Russian shooting exploding zombies, we’d just assumed it was some horrible thing he dragged out of an abandoned Men’s Warehouse and stuffed full of fulminate of mercury, which by the way, is just a tits awesome idea that we in no way recommend anyone try out without first inviting us to the show, which we will totally be there with like, a flat of beer (for afterwords, it always goes guns, mercury fulminate party, then beer).  But no, they’re like, a thing, a thing you can buy.

And there’s more than just explosive targets, which are pretty much one and done, so sure, it’s a great way to end a day shooting, but not a way to start it, Zombie Industries also makes zombies full of ichor for you to go to town with.

They’re a little bit spendy at $90/zombie, but just watching people have that kind of fun clearly means that they’re worth every penny.  And of course, you can combine the used zombies with exploding targets ($5-8) for ease of cleanup.  If anything, you can enjoy all their videos of folk just going crazy with zombies Chris, Rocky, Ivan, and of course, “The Ex”.