Video: Winchester Adds a New Model 70 to Their Lineup

Although lever-action rifles are what Winchester is most famous for, their Model 70 is hands-down their most popular firearm.

Initially introduced as a sporting rifle, with small and big game in mind, but mostly big, it was quickly ushered into military service in the U.S in 1942.  And though the M1903 has been in service longer, (1905-present) the Model 70 still gets fielded; the M1903 is still endorsed by the color guard, heh.  The Model 70 is still being used by the United States Marines Corps and probably has Carlos Hathcock to thank for that; he used a Model 70 in .30-06 and it served him just fine. 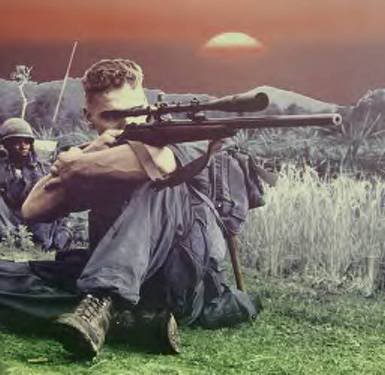 It also sees use by countless police forces around the world, under its true Model 70 brand or as its Fabrique Nationale dopplegangers, the Special Police Rifle and the Patrol Bolt Rifle.

There were dark times for the Model 70, as well.  In 1964, to cut costs, many of its more expensive features were dropped.  Before then, the 70 featured a Mauser claw extractor was dropped to make way for a fully-enclosing bolt, which changed the whole feeding system to a push-type.  While a fully-enclosed case is theoretically safer to shoot, a lot of people were angry about the new mechanism’s inherent dive in reliability.

And even though it got a few other, better features, like hammer-forged barrels, the 70 wouldn’t be exceptionally popular until 1992, when Winchester brought back the Pre-’64 action.  Actually, it’s a hybrid of the two.  It uses a modified short claw extractor from the newer Model 70 that fits under the action of the Pre-’64 bolt face, combining the reliabilities of both into a super-70 that has recovered its reputation as one of the most reliable bolt-action rifles on the market.

Just like that, they’re everywhere again, in all shapes and sizes, colors and variants.

And Winchester is still adding new ones to the roster.  Enter the Model 70 Featherweight Compact.  Much like the Featherweight, it has Pre-’64 style controlled round feeding, a three-position safety, and a jeweled bolt body with a knurled bolt handle. It also uses Winchester’s M.O.A. adjustable trigger system, with no takeup, creep, or overtravel. It has an angled comb grade I walnut stock with a Schnabel foreend and a satin finish and cut checkering, with a Pachmayr Decelerator pad glued to the back to sop up recoil.