In Russia, Gun Designs You or Why I Can't Stand Russian Engineering

I have difficulty with Russian engineering design.  Not difficulty really – I simply detest it.

Russian notions of weapons are pedestrian at best and seldom rise above mediocre (and yes, despite the fact that it’s the most pervasively used weapon in the world with a proven track record for getting the job done, in both spirit and function I’m also invoking the venerable AK-47). Perhaps this is due to the presiding authoritarian Soviet system that for 72 years dominated every aspect of Russian life.  But then again that repressive regime supposedly collapsed 20 years ago. 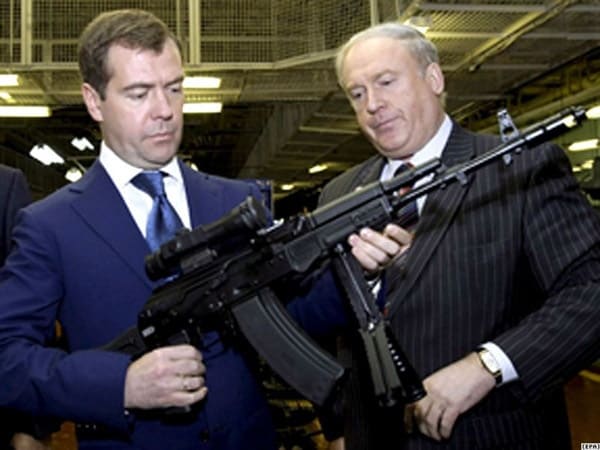 And which isn’t to say Russian engineers do not possess their fair share of talent and ingenuity.  With the slightest exertion, their engineers could create improved armaments, even replicate existing weapons, as they have demonstrated myriad times.  In the land of breadlines unlicensed reverse engineering was and still is certainly not beneath them.  My problem is this—with all that brain power, they could just as easily manufacture weapons that were ergonomically enhanced; instead they developed the KORD 12.7 mm Heavy Machine Gun.

As gun guys and gals we understand that even utilitarian weapons have an inherent mechanical beauty and that is never more evident than the brilliant AK-47 by Mikhail Timofeyevich Kalashnikov (Михаи́л Тимофе́евич Кала́шников).  He created the ultimate in dependability.

The AK-47 was an anomaly and the result of one man’s inventive genius. The Party quickly suppressed that individualism, promoted him to Lieutenant General and put him on the Chicken Kiev circuit. The State then tried to alter the name of the weapon but Kalashnikov’s initials and the year it was introduced stuck. 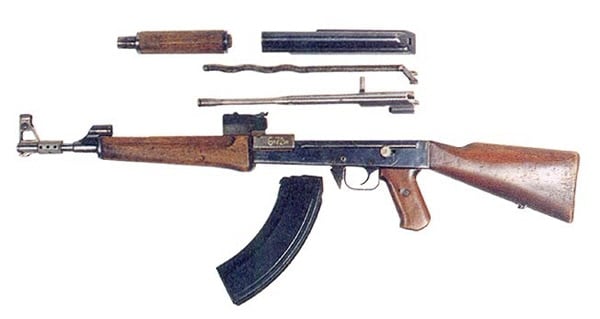 The AK-47 is a perfect example of efficient design but even then in manufacture, stamped parts were used as opposed to machined with the fit and finish of a Lada. The weapon is less than precise and produces a distinctive clanging report that is off putting, much like a high-end Mercedes, but in diesel … any vehicle that arresting in appearance should not sound like it does. 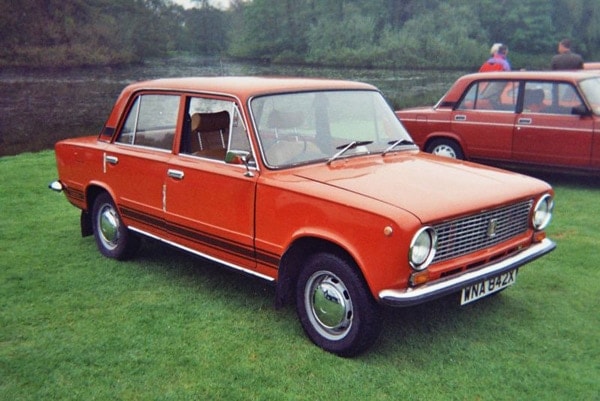 The USSR has never produced another weapon to parallel the AK-47s success as they are still inured in Soviet thinking. They tried with the AK-74. ‘Do enough to make it work and don’t bother to go the extra mile to make it faultless’. The Chinese have a version of the AK-47 that uses wood on the stock that appears to be from recycled skids.

Ok, I have that off of my chest and now an example of my reasoning.

The KORD 12.7 mm Heavy Machine Gun (Konstruktsija ORuzheinikov-Degtyarovtsev) was developed to fill a very large gap in the Russian Armies weapon repertoire created by the fall of the Soviet Union. 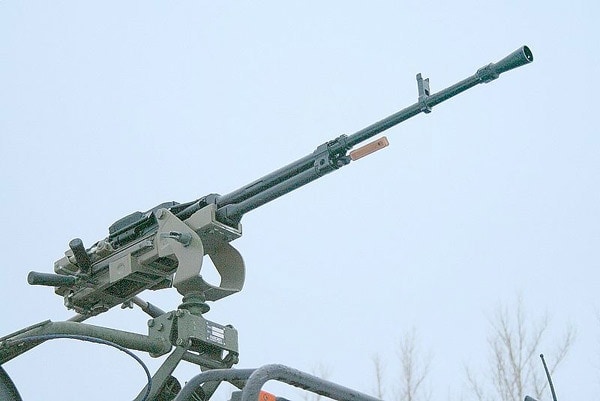 The NSV Heavy Machine Guns production facilities, that built all the Russian Army Heavys, are located in the new nation of Kazakhstan and were unwillingly forfeited by the Russians to the Kazakhs when the USSR imploded in 1991.
The Kazaks were understandably defiant in August 1991, gleefully refusing to surrender the NSV facilities, tooling and blueprints from the Soviet built factory, after 72 years of centralized dominance by Moscow.  I am confident it was exhilarating to tell Kazakhstan’s former Kremlin bosses to ПОШЁЛ НА ХУЙ. 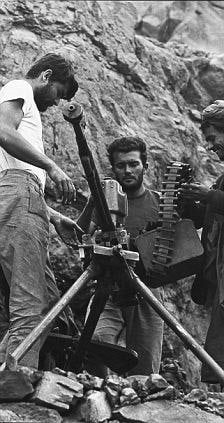 That same year the Russian Degtyarev Bureau was charged with developing a heavy machine gun to be chambered for a 12.7 X 108 mm cartridge and designed to be mounted in helicopters, armoured vehicles and tanks to replace the NSV Heavy MG then in service.  The weapon was also promoted to the world market as portable (please).

When you are broke it would seem more practical to buy quality arms on the world market and direct the weapons development funds toward the stabilization of the economy, increase oil exploration and halt the freefall of the Rubel.  Starting a machine gun factory while neglecting crop production is the thinking that brought down the USSR with a loud thud. 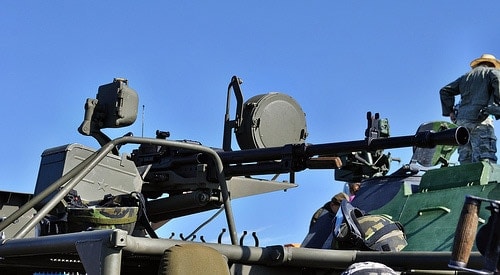 The country was close to bankrupt in 1991 and being picked over by criminal gangs as well as high-tech billionaire carpetbaggers. To further lend to Russian domestic instability the President, Boris Yeltsin, was mostly drunk during his term in office, embarrassingly many times at State occasions and public appearances.

In this sea of pandemonium the KORD 12.7 mm Heavy Machine Gun was officially decided on as the first Russian developed weapon introduced after the fall of the USSR. In reality it was simply a rework of the now Kazakhstani NSV Heavy. The KORD went into Army service in 1998.

To fortify my design contention, the new weapon incorporated the same outside case as the 50 year old NSV. The resultant machine gun resembles a Mac Truck muffler. 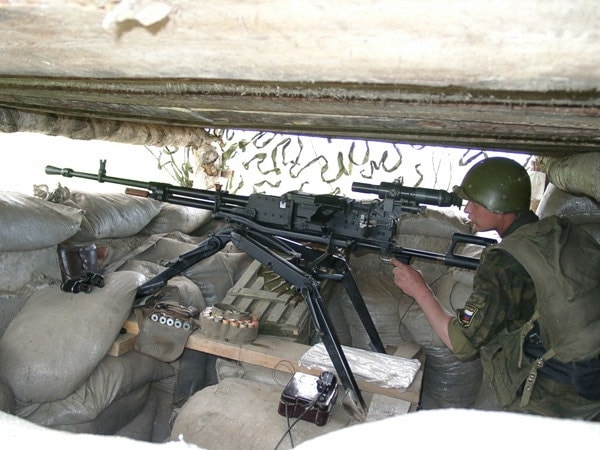 I speak metric fluently and spotted this bit of bullshit instantly, The KORD is described as “only 31 kilograms” which is 13+ pounds heavier than the NSV it replaced and weighs in at 68+ pounds, without ammunition.

A belt of 12.7 mm ammo is 11 kilos or 24+ pounds so the statement from The KORD public relations department is “it is easily carried by a strong soldier”, this must be altered to “by a very strong soldier”.  They also suggest that it can be fired on the move. Spare me.

The weapon weighs 92+ pounds with one ammo belt. “Ivan, just put that under your arm and charge towards Chechnya”. Notice the recoil when fired in this mode. 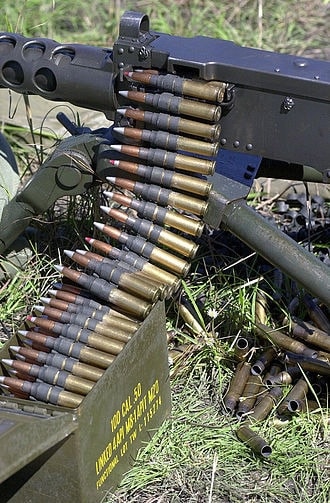 The KORD is air cooled, belt feed and gas operated.  There is only automatic fire that flies in the face of all current practice of any hope of accuracy with a machine gun. The whole weapon is gas operated employing a long stroke gas piston. The barrel is adapted with an efficient muzzle brake. The gun was reworked internally to increase the rate of fire to 650-700, which is below average for today’s weapons. If your gun crew had to carry the ammo you need to bring a lift truck.