Introducing the Jailer’s Key Gun: Freeing and Arming Criminals Since 1854

The year is 1854. The United States of America is a fledgling nation just coming into its own on the world stage. Franklin Pierce – a Democrat- is President. I know, trying times. At least he’s not a dirty Whig like Millard Fillmore. But stay with me. 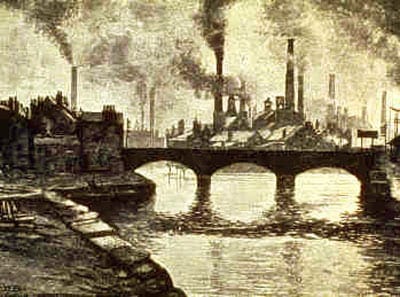 The Industrial Revolution has brought a wealth of jobs to North America, and you’re among the lucky; you’re a jailer. Sound like a drag? Well, consider this: in 1854, the only place worse than a jail was…well…any factory, mine, machine shop or shipyard anywhere in the land. In other words, consider yourself lucky, since the list of hazards at your job doesn’t include being sucked into the toothy gears of heavy machinery, asphyxiated by dangerous fumes, or stumbling over small children.

Ah, the good old days. Unlike those poor factory dwellers, all you’re required to do is oversee a cavernous, overcrowded dungeon filled with dangerous criminals. Most of these criminals, unable to scrape together a living working in the aforementioned factories and shipyards and machine shops, were forced to steal and scavenge and beg – all of which were considered criminal acts in those days. The good news is that the jail  practically patrols itself. What with all the rats, cholera and consumption, prisoners are generally too weak, malnourished or epidemic-stricken to get too rowdy. And remember, they worked in the factories, meaning they’re probably down an appendage or two, or too bat-shit crazy from dipping hats in mercury all day to even know where they are. 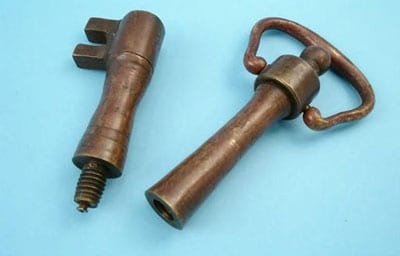 Add to the list of job perks the fact that you get to carry a gun! Well, a key-gun. You see, as it turns out, the powers that be are so concerned with your safety that they’ve equipped you with a primitive and clandestine firearm. Lodged deep in the neck of your jailer’s key – a key that is fully functional for opening doors, I might add – is a .32 caliber projectile. Behind that projectile  is some sort of packed gunpowder, and presumably a wad of some sort. Forgive me if I don’t know the intimate particulars of how these things work; after all, it’s a damn key. 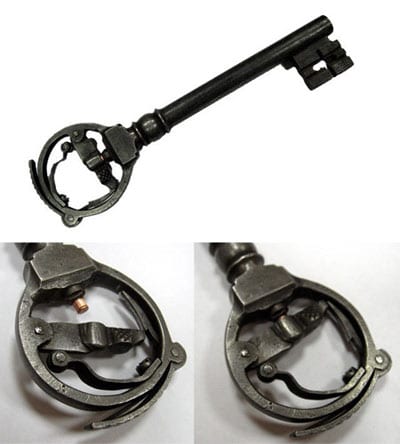 You’re employer has furnished you with this weapon so that you can defend yourself in the case of an emergency. Whether it will do you a bit of good is debatable. You see, the type of key gun you’re carrying requires you to fire it with the use of a cigar. A tiny hole on the top of the key exposes the gunpowder chamber, allowing you to fire the tiny weapon at a moment’s notice. Of course, the designer of this delightful gadget has made two potentially deadly assumptions. The first is that you’re smoking a cigar at all times. I know – farfetched. But remember, it’s 1854. Tobacco is raining down from the heavens and the entire population is smoking during every waking moment, women and children included. How else were people expected to work 18 hour days? 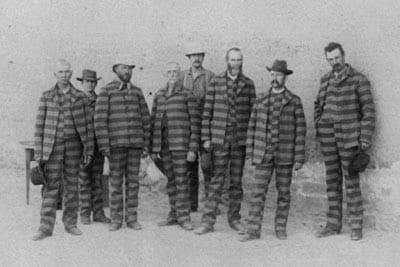 The second assumption made by the inventor is more problematic. The designer has calculated that while you’re in the death grip of some wild-eyed lunatic prisoner, you’ll have the wherewithal to grab hold of your key, point it accurately at your assailant, take the cigar out of your mouth, and carefully touch the burning tip to the powder hole on the top of your key gun (a powder hole that’s quite small). Not to mention the fact that during the fracas, other prisoners have joined in, and are frantically trying to wrest your KEYS from you so that they too might escape. 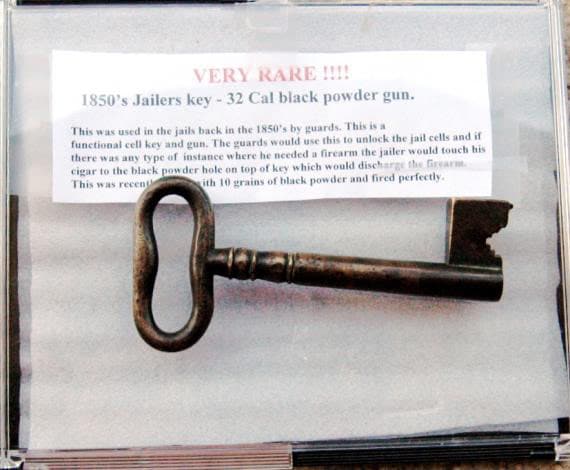 As you might imagine, the only actual use for these first key guns was to later line the pockets of antique collectors, since most of them were thrown in rivers and swamps after being snatched from their original owners and used throw open every door in the prison. It’s no wonder the note says “Very Rare!!!” Those few that remained made great collectors items. 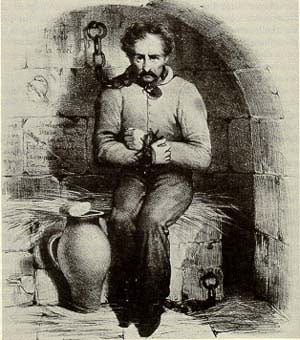 Fortunately, it appears that inventors quickly realized the error of their ways, later designing a more user-friendly version that included a flintlock-style firing mechanism and trigger. The operative words here are “trigger” and “user-friendly.” What the designers failed to do was to somehow render these keys less desirable to inmates.

For example, imagine again the aforementioned scenario. You’re in the death grip of some crazed inmate, and he’s desperately trying to wrestle your key from you. If he does so without your intervention, he now has a user friendly GUN in his hands, not to mention the key that opens his cell. At least when you had the cigar-fired version, you were the only one able to shoot it. Now the inmates are loose, ransacking the prison, and have at least one shot to fire when the time comes. 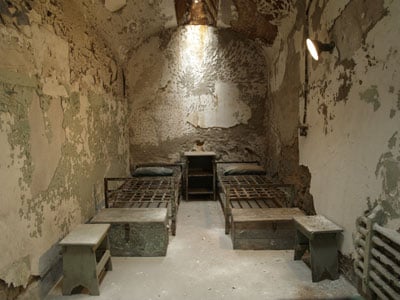 As you might imagine, these jailer key guns weren’t around for long, perhaps just a little longer than their unfortunate original owner.

You know what, I retract what I said earlier. Maybe you ought to consider going to work at the factory or the mine or the shipyard. I for one would rather take my chances with toothy machines and dangerous chemical fumes than wild-eyed inmates armed with guns.

Remind me to cast my next ballot for a Republican…or a Whig.