Command Arms Accessories really does make some swanky stuff.  Whether or not you’re looking for a solid buttstock for your AR or Glock or looking for one of the better M16 stock tubes for your modern AK, chances are, if you spend enough time browsing CAA’s website, you’ll spot something that arouses the tacticool part of you. 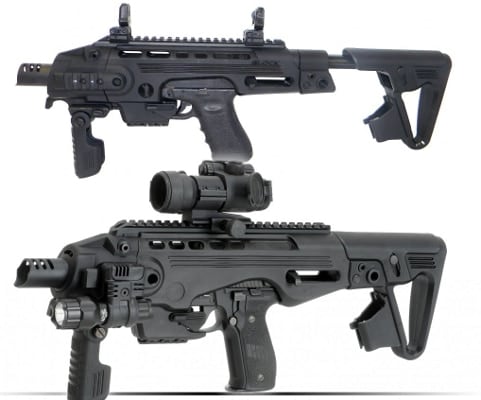 (Don’t deny it, either.  Everyone is a little tacticool.  Tacticool isn’t a choice, and it’s normal.  You know, they say that the people who are the most into “traditional” looks and “classic” furniture, people who bash tacticool the loudest and hardest, are secretly mall ninjas in the closet.  It’s true!  Why else are they in all those forums looking at pictures of rifles.  Listen: it’s not just to say naughty things about quad rails.)

One of the more ambitions (and popular) CAA projects is the Roni, which probably stands for something but we’re going to stick with the theory that they’re just reeaaally into noodles, like at first it’s funny but then it starts to freak you out how much they’re into noodles.  The Roni is a short-barreled rifle kit for many popular service pistols. 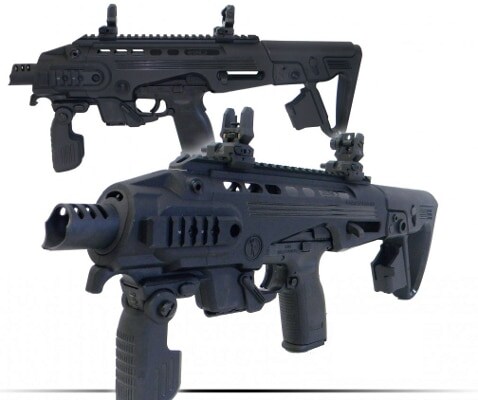 It’s an easy way to reasonably, honestly, $400 isn’t that much when you think about all you’re getting, convert your Glock, XD, SIG, SIG Pro, Beretta, PX4, Bersa, or BUL, into a something considerably less concealable.  While their target market is and always will be police and special forces, there absolutely is a civilian demand for their Roni kits, which is why, due to popular demand, they made a carbine kit ($500) that doesn’t require NFA registration.

Their latest Roni is civvy-legal, too, but we’re not sure, how can we put this politely… we’re not sure why it exists.  The Roni Recon converts your pistol into a—drum-roll please… wait for it… wait—a pistol. Available only for Glocks (for now!) and for $350, the Roni Recon adds three extra rails to your handgun and extends and threads its barrel for a muzzle device (glass breaker included) and adds a single-point sling mount where the stock would normally go. 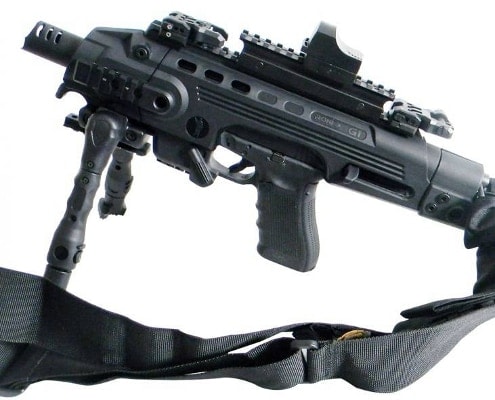 OK, so there is a slight gap in the market for these, not just the coveted “Glock Owners Who Have More Money than Sense” demographic (hey, there are support groups, shooting clubs out there for you—if you think you might have more money than sense, and are passionate about Glocks and Glock accessories, there are people who can help).  But as soon as you throw a pistol grip on that front rail, poof, just like that, it’s gotta be registered. So it’s a good way to add a scope or a red-dot sight on top and some back-up irons, which you’re gonna need now that you’ve buried the ones that came with the gun, without having to send your pistol off to a gunsmith, and it looks… alright, but we can’t really get over the fact that it converts a handgun into a handgun.  For money.  But if you’re actually one of the few that have been waiting for exactly this, we’re happy to tell you: it’s here.  And it’s cheaper than a regular Roni, woot. 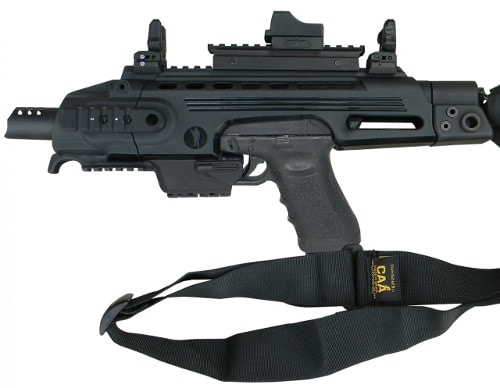