Last May, nearly a year to the day after Thai military turned their guns on protestors in the nation’s capital, U.S. troops traveled to the same southeast Asian nation to help train a new class of military snipers. Although Thai Prime Minister Abhisit Vejjajiva has denied wrongdoing on the part of his military, the vast majority of bystanders have claimed that the Thai military – in the midst of peaceful protests – turned its guns on civilian protestors and Red Shirts, shooting dozens of unarmed Thais. Moreover, many have claimed that military snipers were among the shooters. 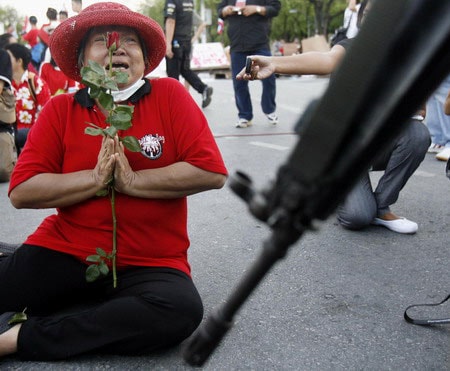 Said U.S. Gunnery Sgt. Victor Lopez, “Our goal as snipers is a first-round impact with every shot.” Indeed, the Thai military rained a barrage of bullets on their own people with deadly precision.

Andrew Spooner, a reporter for Asiancorrespondent.com, shared the following story of a a young girl whose brother, Samaphan “Cher” Srithep, was gunned down on that fateful day in Bangkok in May of 2010. The victim’s sister recalled the following account:

Today he was impertinent enough to go into the danger zone. Someone in there was cruel enough to shoot him until he fell. The blood from his head left  a long trail. I guess he didn’t die immediately. He must have suffered immense pain. I don’t know what it feels like for a body to still be breathing, for the pulse to still be racing, while your head lies smashed on the pavement like a watermelon dropped from a great height. 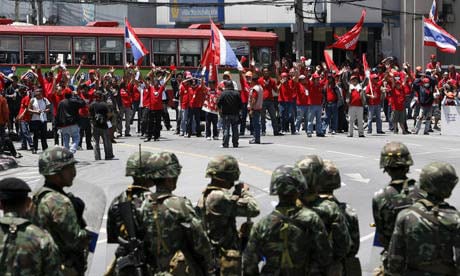 He laid there for almost an hour before the rescue people managed to bring out that faintly breathing body. The soldiers would not let anyone go in to help him. They shot everyone who tried to do so. One of the rescue people nearly got shot in the arm. The doctor said he died at the hospital. That shocked me and made me cry. It meant that for an unbearably long time Cher must have been aware that it was his own head lying on the pavement like a smashed watermelon.

According to reports, onlookers and medics who attempted to help Cher were also fired upon by military troops. The following video shows what appears to be a sniper firing upon civilians attempting to help the young man, who can be seen bleeding profusely from the head on the right side of the frame.
The video, along with allegations and strong evidence pointing to a brutal Thai military crackdown, call into question the merits of U.S. Military cooperation with a Thai regime that appears increasingly autocratic and dictatorial. The events that unfolded in Bangkok – that resulted in the eventual death of Cher Srithep and many others – have many questioning not only the timing of U.S. Military cooperation with the Thai government, but also wondering whose guns should be trained on who.