Wyatt Earp and the Buntline Special: The Gunslinger's Preferred Arm (Or Not)

A young cowboy was sitting in a saloon late one night, and instantly recognized
the elderly man standing at the bar as the fastest gun in the west in his day. The young cowboy walked over to the elderly man, sat down next to him, and bought him a drink. He then started talking about wanting to be the next best shot.

“Could you give me some tips,” he asked.

The elderly gunslinger replied, “Well, sure I can. For one thing, you’re wearing your gun way too high. Try tying your holster lower on your leg.” 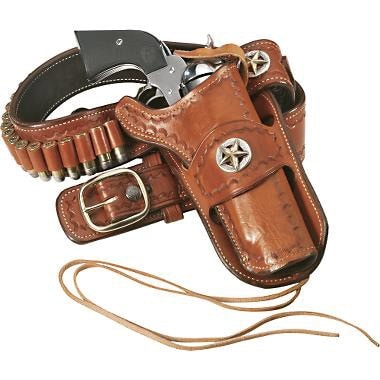 “Will that make me a faster shot,” the young cowboy asked.

So the young cowboy did as he was told, then stood up, whipped out his .44, and shot the bowtie right off the piano player.

“Well,” answered the old-timer, “cut a notch out of your holster where the hammer hits. That’ll give you a smoother draw.”

“Will that maker me a better gunslinger?” he asked.

So the young cowboy got out his knife and did what he was told. Then he stood back up, drew out his revolver in a blur, and instantly shot a cufflink off of the piano player’s sleeve. 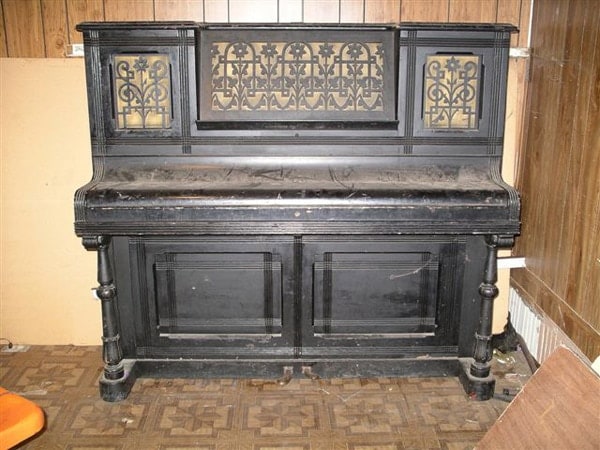 “You bet I do,” the old man replied, as he pointed to a can in the corner of the saloon. “See that axle grease over there? Go coat your gun with it.”

So the young man smeared some grease on the barrel of his gun.”

“No, no,” said the old man, “not like that. Coat the whole gun with the grease, handle and all.”

“Will that make me a better gunfighter?” asked the young cowboy.

“Nah,” replied the old timer, “but, when Wyatt Earp gets done playing the piano, he’s gonna shove that gun up yer butt, and it won’t hurt as much.” 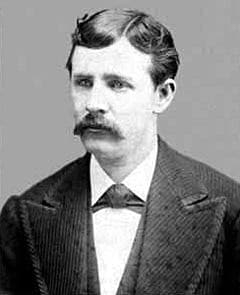 Yes, I know, your typical silly gunslinger joke. But what about Wyatt Earp? Was his reputation real, or has it been romanticized over the years in books and films? The answer to that question is most probably a little bit of exaggeration, mixed in with some truth.

Wyatt Earp, was actually Wyatt Berry Stapp Earp, and, yes, he really did participate in the highly controversial “Gunfight at the O.K. Corral,” on October 26th, 1881, although it technically wasn’t in the corral at all, but adjacent to an alleyway about 100 feet away. He, along with his brothers, Virgil and Morgan, and with Doc Holliday, faced off against the brothers Tom and Frank McLaury, and Billy and Ike Clanton, as well as Billy Claiborne. It took place in Tombstone, Arizona, but only lasted about thirty seconds. Ike Clanton and Billy Claiborne ran away from the fight unharmed. During the brief gunfight, about thirty or thirty-two shots rang out, and three men lay dead, the McLaury brothers and Billy Clanton.

As it turned out, Ike Clanton had Wyatt and his brothers charged for murder. They went to court, and were eventually found not guilty. 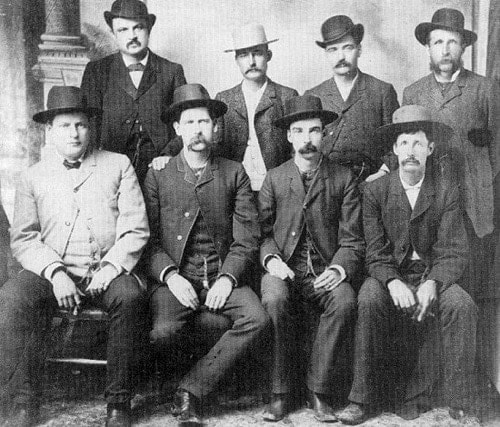 The story didn’t end there, however, as there was some revenge killings following the court’s decision, but the O.K. Corral story went into the history books. The story of that gunfight, and the bloodshed on both sides that followed, as well as Wyatt Earp’s penchant for exaggeration and bending the truth a little, resulted in the widespread belief that he was more than likely the toughest gunslinger in the Wild West. The gunfight has subsequently been retold in books and several movies. According to Earp, he killed several more infamous people, although many of his claims have remained undocumented, hence we may never know the full story of his life as a lawman in the Old West.

But what about the weapon he used? Well, if you asked people, who was associated with the “Buntline Special,” they would point to Wyatt Earp. An unknown number of extra-long-barreled Colt Peacemakers had been produced, but very few earned the moniker of “Buntline Special.” As a matter of fact, some experts put the number at just 31 revolvers, with the serial numbers ranging from 28,800 to 28,830. Those 31 revolvers had special frames that were manufactured for use only with those oversized barrels. Some referred to these types of weapons as Colt-Revolver-Carbines, with a few having barrel lengths of 16 inches. 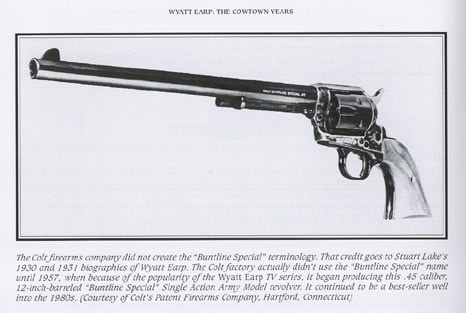 They were produced in 1876, the same year that the writer E.Z.C. Judson presented a Colt .45 to each of the five Dodge City lawmen, Wyatt Earp, Bat Masterson, Neil Brown, Charlie Bassett and Bill Tilghman. Judson’s pen-name was Ned Buntline, hence the name given to the revolvers. According to Wyatt Earp’s later-in-life biographer, Stuart Lake, the revolvers were given in gratitude to the five men, for their colorful renditions of gunfights that ended up in the dime-novels written by Judson/Buntline.

Accounting for Judson’s professional ambitions however, the veracity of whether or not Earp actually holstered the 12-inch barrel during his gunfighting career has also been heavily disputed as a journalistic flare.  Wyatt Earp died in 1929, and, to this day, the actual whereabouts of his famous revolver, and of the other four given out by Judson to the five lawmen, has never been positively established. Theories abound about where some may be, but a clear link has yet to be established to any of them. 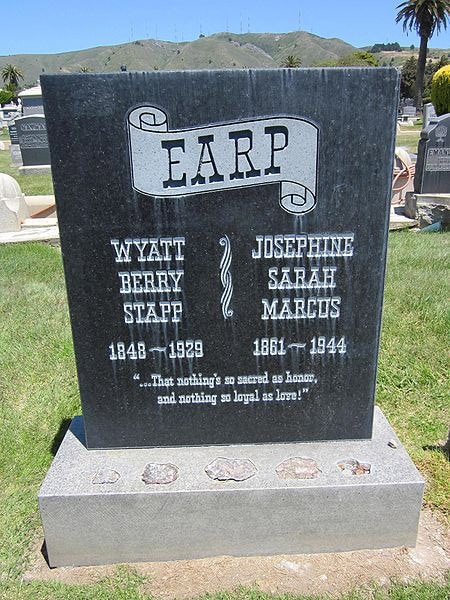