Several hundred members of the Iowa National Guard’s 1st Squadron, 113th Cavalry Regiment, left Afghanistan last week.  They are the first group of 10,000 U.S. troops scheduled to leave Afghanistan by the end of the year.

That 10,000 number represents approximately one third of the 33,000 U.S. troops deployed in 2009 as part of a “surge” effort sanctioned by President Obama.   According to the President’s timetable, the remaining 23,000 will be extracted by the summer of 2012.   As for the rest of the U.S. troops serving in Afghanistan, roughly 70,000 servicemen and servicewomen, they are expected to return home by the end of 2014.

To honor the service of those in the 113th Calvary who where stationed in Parwan province, in eastern Afghanistan, and who are now departing there was a ceremony held at Bagram.  A speaker at the ceremony enumerated their accomplishments: 14 high-value targets killed or captured, the largest homemade explosives lab in Parwan discovered and dismantled, 52 consecutive days of keeping insurgent fire out of the Bagram base, 3,800 combat missions completed, 400 Afghan police officers trained and a coordination center built.  They also reflected on the costs: there was one soldier in the unit who paid the ultimate price during a firefight to help rescue a downed pilot.

Their responsibilities will not be taken on by a new rotation of fresh troops.  Instead a unit half their size, approximately 300 troops, will now oversee security in Parwan province and the military base at Bagram. 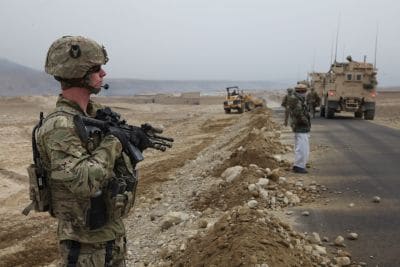 Troop numbers in Afghanistan remains a divisive issue, even amongst soldiers and their respective commanders.  Current commander of the 113th Calvary, Lt. Col. David Updegraff told reporters “I was very happy to have the size of task force that I had because it allowed me a lot of flexibility.”  And, with respect to the troops taking over at Parwan, he said, “They may not be as robust as us, or have as many as us, but they certainly will have the ability to secure the Bargram security zone.”

Soldiers within the 113th tell a different story, for example, Staff Sgt. Brain Pals stated, “Most of our platoons were short-manned quite often. We were running with the minimum amount that we safely can. And they were running long missions, long days” 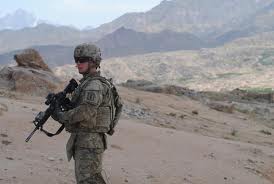 And with regards to the overall goals of nation building via infrastructure and civil services, Pfc. Scott Silverblatt had this to say about the difficulty in training the Afghan military and police, “You’ve got to pull teeth to get the ANP (Afghan National Police) to do anything,”

Despite disagreements about troop numbers and the overall difficulties troops are faced with, what is clear is that help is needed.  As Staff Sgt Jesse Ross said, “Does Afghanistan need help?  Yes.  Do they necessarily want it from us? I don’t know.”

In the coming months, as troop numbers continue to decrease and resources become more scarce, we’ll soon realize whether or not Afghanistan received the help it so desperately needs.