Video: The Digger, or How to Clear a Minefield in 90 Seconds

In the five or so centuries since the landmine was invented, only as recently as WWI has mechanical demining risen as a technology; mostly it’s because mechanical demining is, as astounding as this sounds, less effective than clearing a minefield by hand.  And no matter how good your metal detectors are, no matter how well-trained your bomb dogs are, clearing a minefield by hand always means by hand, which is exactly as fun as it sounds. 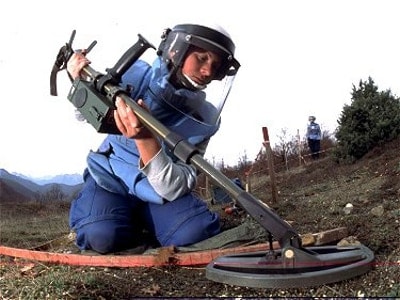 And mines are everywhere.  You can’t install a swing set in Europe without calling in a bomb squad to give you the all clear, and they’re relatively bomb-free compared to places in the Middle East and Africa.  Hell, in Uganda they use bombs as schoolhouse bells. 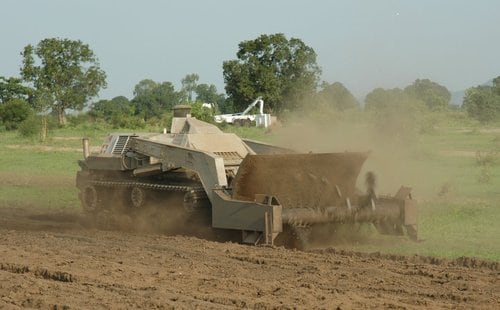 Non-profit Digger DTR wants to change how minefields get cleared, and their philosophy is apparent: go big or go home.  Well, officially it’s “You have survived war—you shall now survive peace.”  But really, go big. It all started out with the Digger D-1, which was an armored, tracked, flail mower, used to clear-cut brush and barbed wire from fields before sending in the bomb squad.  It worked well, increasing the speed at which a crew could operate, but left the heavy lifting to human hands.  The D-2 sought to fix that.  In addition to clear-cutting a minefield, riding ahead of its treads hangs a massive cylinder dripping with heavy flails that dig eight inches deep wherever it goes, and behind that is a giant shield to protect the digger. 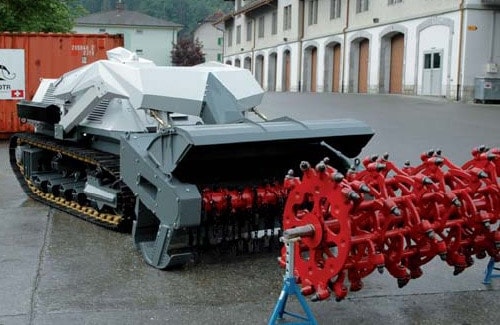 But it wasn’t good enough: enter the D-3.  It’s an improvement in every conceivable way over the D-2.  It has a higher-horsepower engine, better treads, more armor, better armor, and combines flails with tungsten picks to detonate any mines and even unspent artillery in its path.  It can sustain bombs with 18-lb explosive charges, artillery shells as large as 81mm, and runs just fine at temperatures over 120 degrees.

It has multiple, redundant cooling systems, which themselves are armored, and best of all: it’s remote-controlled.

Yep, the D-3 will happily smash itself a column of safe terrain all day long while its operators stand and watch from a safe (and hopefully air-conditioned) distance.  And unlike most military-grade hardware, this one comes priced to move: depending on who needs it, Digger DTR even gives them away.  So if you’re feeling flush and maybe a little guilty for not having to worry about tripping a mine on your way home from work every day, go check out their website, you can donate to their cause or just read all about their work around the world.