All of us at Guns.com enjoy covering the news with a look at events from multiple perspectives, getting all sides of the story in one place, putting a little quid into your quo pro.  And normally, when you see a cop operating at an extreme, good or bad, there’s still a few ways to look at things.  But the way Canton, OH police officer Daniel Harless flew off the hook over a bungled attempt by William Bartlett to declare himself as armed only raises questions.  The only positive thing about this is that no one died.

In Ohio, all people with concealed carry permits are required to notify law enforcement officers that they’re carrying, if they’re carrying.  The law is that they have to do so immediately.  It is true that Bartlett never did immediately declare his packing heat to the police at the very moment he was pulled over, but in his defense, he was complying fully with the lawful order to “Shut the fuck up!”

All of that and more was caught by Harless’ dashcam.  According to the video, Bartlett was in a bad neighborhood giving a ride to people he didn’t know.  Harless recognized one of the passengers with a record of solicitation.  He ordered both passengers out of the car for questioning while the other officer, Mark Diels, searched the car.  All this time Bartlett is repeatedly ordered to shut up and stay where he is.

Six minutes into the traffic stop, Harless approached Bartlett, pulls on the driver side door, then orders him to open it.  Not to say that this was the most polite of traffic stops to begin with, but it’s from here on out where most people would say things get interesting.  “Open up the door.  Unlock it.  What are you doin’?” 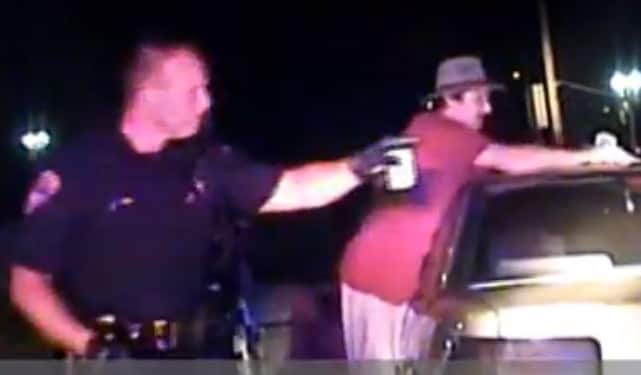 “If you give me an answer other than the truth you’re coming out of there.”

“I want your driver’s license.”

“—Reliable… I was working for this skyscraper, I was laid off, I don’t know these other guys’ numbers but I was over here looking to find their truck.  I know her from when I drove a—“

“You’re lyin’.”  Shortly after, he ordered Bartlett out of the car.  “You’re half a heartbeat from going to jail, if you keep messin’ around.  Why do you keep havin’ that?” (Motioning towards carry permit.)

Bartlett stepped out of the car, with his hands raised over his head, license in one, permit in the other, “Because I have a concealed carry—”

“Do you have a weapon on you?”

“Lock your hands behind your back.” At this point, Mark Diels comes over to assist.  “What’s the first thing you’re supposed to do?  You are supposed to tell me you have a weapon… right off the damn bat!”  He then turned to the remaining free passenger.  “Get lost.  If I run into you again tonight I’m going to put lumps on you!  Now get the hell out of here!”

After turning back to him, Harless dumps no end to the threats on Bartlett.  He threatens him with felony charges, (failure to notify is a misdemeanor) and walks back and forth, shouting insults at him and at the dashcam.  “Talking to me with a gun!  Do you want me to take mine and stick it to your head?  I should shoot you.  You’re just a stupid human being.  I should cave in your head!”

So there will be very few people standing in Harless’ corner after this, and those that do will probably do so out of obligation.  But the real question is whether or not this is one instance of a single police officer going off the rails, or is it symptomatic of greater problems in the Canton PD?  It’s not as if he was acting alone, Mark Diels was silent because his microphone wasn’t picking up correctly; he, at the very least, did not stop his partner from threatening to kill a man handcuffed and in their custody.

Bartlett has since been released.  He is pending misdemeanor charges of failure to notify and some business about his car.  A full municipal trial awaits officer Harless.

Currently, Harless has been relieved of all duties following a quick investigation of the incident.  His work history isn’t spotless, but it doesn’t show large swaths of misconduct, either.  In his 15 years working in Canton, he’s had at least 16 complaints filed against him, with one reprimand.  He was exonerated of use of excessive force but reprimanded for disabling his dashcam (you gotta wonder if these two things are related).  So is this behavior attributable to a police officer that snapped, or is there a culture of police violence in Canton that’s being kept hidden?

Another issue is the whole business of required notification.  Does it appreciably improve the safety of officers, requiring people who are legally carrying a firearm to notify law enforcement immediately, or does is just invite incidents like this one?  And how does “immediately” apply in a situation like this?

Not that we expect all officers to be ideal, it’s understandable for one to react to a concealed weapon with discomfort.  This, though, is clearly unacceptable behavior from both police officers.  When it comes to dealing with citizens carrying firearms, Canton Ohio, America would really appreciate it if you were more like, surprisingly enough, Oceanside, California.  Because this is just pure class:

If you’d like to help out, Bartlett is a member of Ohioans for Concealed Carry, and they’re operating on his behalf and asking for donations towards his legal defense fund.