The Deadliest (and Perhaps Stupidest) Game: Utah Dude Promotes Self as Human Target

Like they used to say, it’s nice work if  you can get it, and if you don’t get it, unemployment’s a bitch, but at the very least no one’s trying to kill you.  With unemployment at a national high, specifically accounting for young white guys 20-24, people are going out as far as their limbs will take them to get hired.  Like Mort Encino, for instance; he took a page out of Ice T’s book. 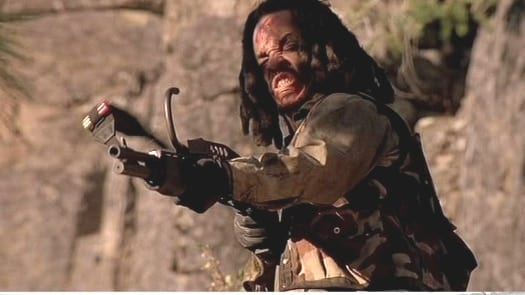 He’s willing to stake his life on his reputation.  And also his life. He’s put his mortal coil up for sale to anyone with $10,000 and a day to spare.  That’s the deal, you get 24 hours to try to kill him and profit off his organs, and after the single-day period, if he survives, he gets the money, if he doesn’t, his family does, and you walk away with the satisfaction of taking down the most dangerous game.  And kidneys.

Otherwise, the rules are vague, perhaps intentionally.  Mort lives in Utah, home to the 1911, and he is a hat owner and as we can attest to, hat owners are gun owners.  Will Mort shoot back?  “I do like to think I have some tricks up my sleeve,” he said during an interview, “But certainly the advantage is with the hunter.”

“I seek hearty gents who fancy themselves sportsmen and bored of the usual game. I am a new breed of prey with thick pelt and smooth hide. I’m faster than a wild turkey, smart as any GODDAMN wild boar and willing to make the ultimate sacrifice for the monetary health of my family.”  But that’s not just it, he is hoping someone will hire him for more mainstream purposes, not just to use him for target practice:

“I’m still holding out hope for something a little bit better than getting blown away,” he said. “Maybe thats [sic] foolish of me. I have received several inquiries of varying levels of sincerity.”

We here at Guns.com have a soft spot for guys like him, people who up and do things themselves, so we hope he gets his dream job, or, you know, a job, and if there’re any paintball parks hiring, we’re pretty sure his pricetag is negotiable to an hourly rate, and human targets that are reusable are just boss.  Remember, you only have to give him a job; you don’t have to give him a gun.