Mossberg's First AR: The MMR in Both Tactical and Hunter Flavors

Mossberg’s been toeing AR waters for some time now, ever since they introduced their Tactical .22, which is a very tactical .22.  Most companies are happy to throw on a single flattop rail, others go with a much tacticaler quad rail, but Mossberg?  Hells no, they went all out and put a fifth rail on that sucker.

You’ve never shot a .22 unless you’ve shot one with five rails.  That kind of tactical doesn’t wear off, it puts Picatinny on your chest.  And their first real foray into the AR depths proves no different: the Mossberg MMR is a whole lot of gun; whether you go in for the MMR Tactical or the MMR Hunter, you’re in the business.

First up: the Tactical.  It’s an M4-profiled carbine, with a 16.25″ barrel threaded and fit with an A2 flash hider and your choice of a standard fixed stock or (also quite standard) six-position stock.  But the resemblance ends there.  They’ve opted to go with a Stark SE-1 ergonomic grip, and oversized charging handle, and a custom vented free-floating quad rail.  It’s available with or without iron sights. 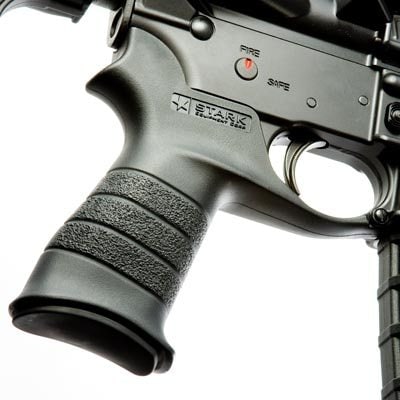 For the more refined, there’s the Hunter—don’t fret, it still sports the ergo grip.  It’s a mid-length rifle that also features a free-floating forearm, but it’s smooth and bereft of rail.  It shrouds an 18″ barrel with no notch for your tactical shotgun or whathaveyou.   It does have two swivel studs for a sling as well as a bipod.  The end of the barrel is clean, unthreaded, and supports no flash hider nor compensator nor brake.

Both use direct-impingement gas systems, have button-rifled barrels with 1:9 twist, and weigh seven pounds dry.  The Hunter is available in black phosphate finish with a hard anodized forearm as well as Mossy Oak camo, either Treestand or Brush.  The Tactical is only served up in the correct finish: black phosphate, black anodizing.  Both feature milled aluminum receivers as well.  Both are chambered in .223 Winchester/5.56 NATO and use standard AR/M4/STANAG mags, of which, one is included with the rifle. 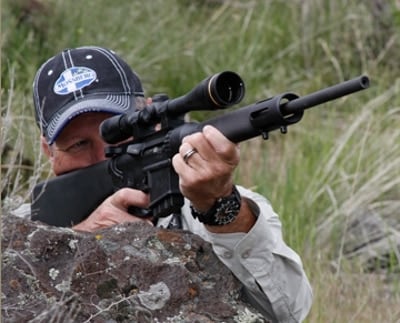 What’s really impressive is that they’re not exceptionally high-priced.  With MSRPs, based on the model, sights, and finish, between $900-$1000, without sacrificing anything feature-wise.  They’re not quite on the market just yet, but history tells us that the shelf prices should be a couple hundred less than that, which means that Mossberg fans won’t have much to complain about at all. 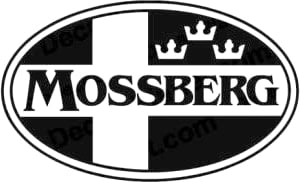