The Dillinger of the North: The Boyd Gang's 1950s Crime Saga

The armed robberies, prison breaks, police shoot outs, manhunts and cop killings that comprise the Boyd Gang’s résumé are so implausible that if presented as a screenplay it would be rejected as ‘too far over the top’.

Edwin Alonso Boyd was the namesake of the Boyd Gang, a foursome of violent hoodlums, but by most verified accounts, Lenny Jackson was both the mind and the muscle.  Boyd was unilaterally named leader and granted folk hero status by the Toronto Star simply because he made for better copy. 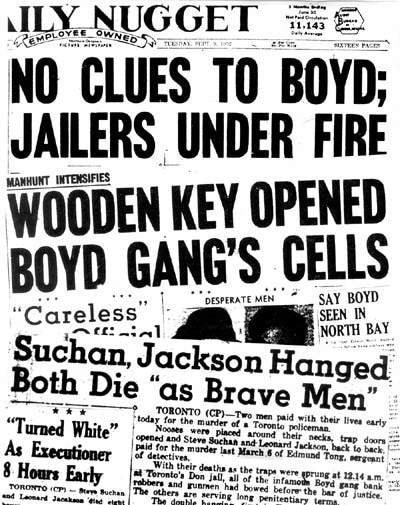 The Star was battling the Toronto Telegram in a circulation war with both papers covering a newspaper editor’s wet dream: an ongoing salacious story.  The reporters needed a personality and Edwin Alonso Boyd was their ticket.

Boyd was 1940s handsome, a commando trained WWII Veteran who, during robberies vaulted bank counters revolver in hand and was much more marketable than a one-footed ex-hairdresser from Niagara Falls named Lenny—even if Lenny Jackson was the brains. More importantly however was the fact that they all lived the gangster life, which, to many era newspapers, was enough to validate their artistic licence to embellish Boyd’s exploits.  So what? They’re criminals. 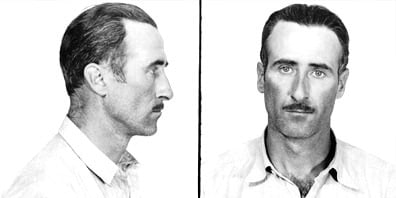 The Boyd Gang’s crime spree occurred incongruously in staid ‘Toronto the Good’ and recalling the illegal events would have seemed more probable in Tijuana than Toronto. 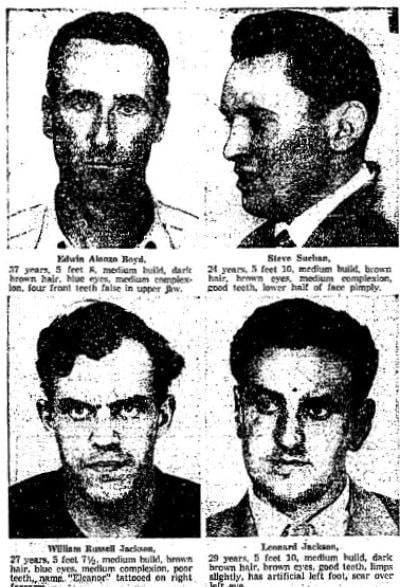 In 1949 Toronto was predominately Protestant and hosted a sizable population of clergy.  As a cultural center it did not have the greatest reputation and was considered what we would call WASP-y today by many.  it was known to be xenophobic as well as superficially puritanical which, being that it was a big, swinging metropolis, also gave the city a reputation as being hypocritical.  It comes as no surprise then that for 1940s and 50s Toronto, the Boyd Saga was beyond the town’s collective experience and even today the sequence of events is complex. 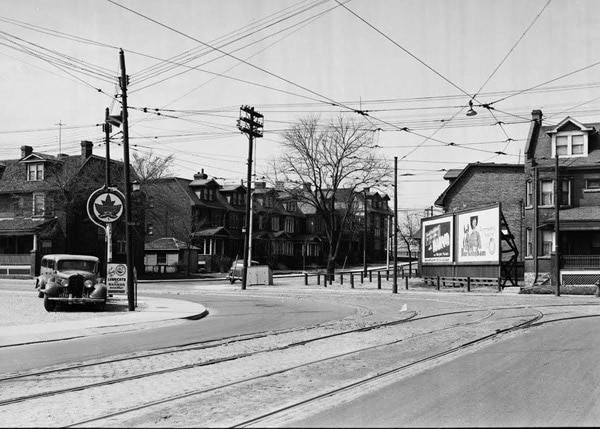 Boyd made his way in Toronto working tedious jobs; on September 9, 1949 after an afternoon of ‘cocktails can create confidence’ he stuck up a Bank of Montreal branch operation and walked away clean with $3000.

Edwin was instantly hooked on ‘the life’ and more so the money.  He initially worked with bush league stickup men for six successful branch robberies between September 1949 and October 1951. The 7th was not as good. 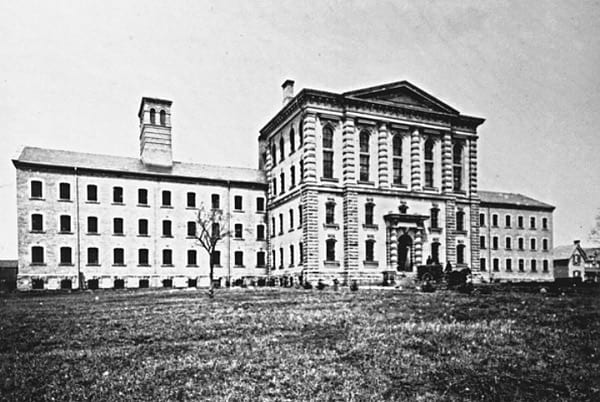 Boyd got fingered by an accomplice, Raymond Gault.  Edwin was sentenced to time in the anachronistic Don Jail in Toronto. The Don Jail, built in 1865, still had functioning gallows and was the dankest of institutions in Toronto.
Boyd was in a cellblock with ‘tough’ Lenny Jackson and Willie ‘the clown’ Jackson (not related), both veteran bank robbers.  Willie had just transferred in, awaiting transport to Kingston Penitentiary. Inevitably they got to talking. 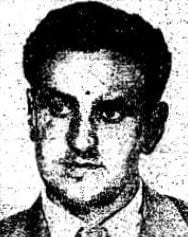 Lenny had an artificial foot inside which he had hidden hacksaw blades. The crew busted out of the Don Jail on November 4, 1951 made good their escape and the Boyd gang went back to work abetted by Steve Suchan, a volatile, ex-musician colleague of Lenny’s. 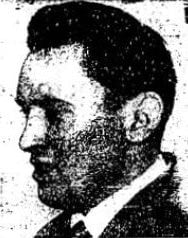 The Bank of Toronto, Dundas West branch was the first target after the gang escaped and they followed up with a series of stickups over a 4 month period netting $75,000 including the largest bank robbery in Canada when they made off with $46,000 in one haul.  Remember these were 1950s figures.

But it was the subsequent monkey show by the Toronto Police that caused the “priggish” citizenry’s sphincters to slam shut over their 50s Buick vinyl after locals ‘registered their concerns’. They got Police action but regretfully not in the form they wanted. 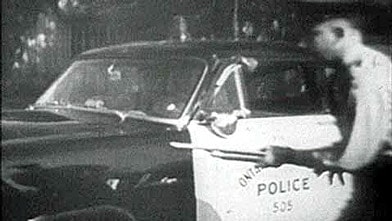 During an escalation in Police efforts, on March 6, 1952 Detective Sergeant Ed Tong got himself murdered and his partner Sergeant Roy Perry shot by Steve Suchan armed with a .445 pistol.  It was a lax traffic stop with Lenny driving, Tong was not prepared and Suchan just got out and shot both Detectives, abandoned one on the street and drove to Quebec to hide.  Both gang members were wounded in the melee as the Detectives returned accurate fire.

The Press transformed the Boyd Gang from folk heroes to cop killers. 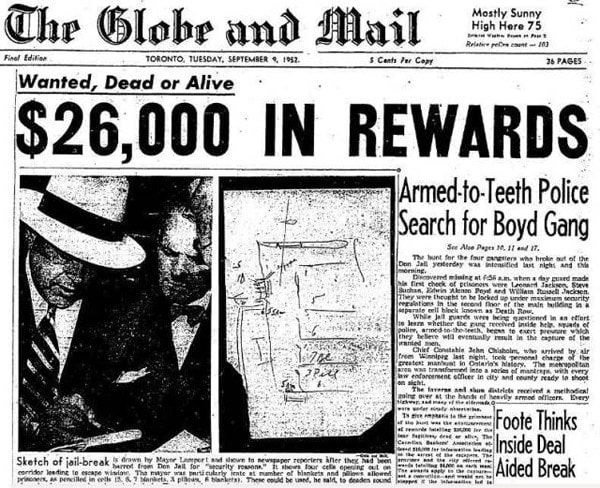 Canada’s biggest manhunt was underway.  A $26,000 reward was astronomical for 1951 with successive Toronto neighbourhoods locked down for house to house searches by Tommy Gun toting Police. The Gang went into hiding. After the shooting Suchan and Lenny Jackson were picked up without incident weeks later in a raid in Montreal.

Toronto Detective, Adolphus ‘Dolph’ Payne made up his mind on Boyd and doggedly tailed the gangster’s brother for five weeks hoping he’s reach out to him. Edwin was taken in a 4.00 A.M. raid with a cocked .38 revolver in his face and Dolph’s order to “give up”.  The Gang including Willie were reunited at the Don Jail, same cell block. 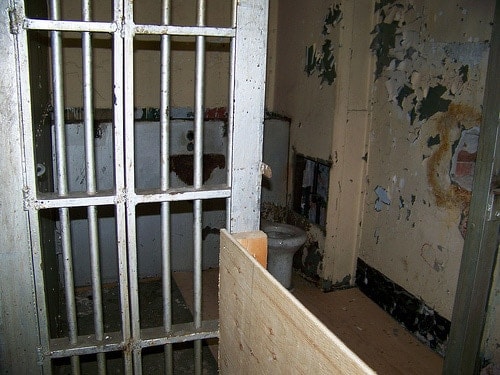 September 8, 1952 they pulled the identical escape with the hacksaw blade but this time smuggled in by a lawyer.  They also had a key to let themselves in and out of cells to do the necessary work in shifts. Their transportation arrangements did not materialize. They ended up on the run but significantly hindered by Lenny who had had his artificial foot confiscated by the guards.

Police quote, “These men have nothing to lose. Two of them were in the shadow of the noose. They’ll shoot anyone who gets in their way. There’ll be a lot of killing before this is over.”

The gang hid out on a local farm for 8 days and on September 16, 1952 as a result of local tips the Police raided a barn a mile from the jail and took them all in.

Willie Jackson got 30 years and Boyd received 8 life sentences concurrently. Boyd died on the outside in 2002.
Lenny Jackson and Steve Suchan were convicted of murder and hanged back to back, at midnight on December 16, 1952, yes in the Don Jail.