The Real Weapons of a Norwegian Mass Murderer

Six hours before going on his terroristic killing spree, Anders Behring Breivik posted a video to YouTube of himself posing in his athletic compression suit, telling his followers to embrace martyrdom, armed with his Ruger Mini 14 hunting rifle and at least a dozen magazines.  His insignia read “Marxist Hunter – Norway – Multiculti Traitor Hunting Permit”.

He was also the owner of a Glock pistol and a unnamed shotgun.  He was not a proud owner, admittedly.  He had initially sought to buy an assault rifle in the Czech Republic, along with a pistol and hopefully some grenades, rocket and otherwise, and smuggle them home.  He was under the impression that because the Czech Republic has more liberal gun ownership laws that it would be easier to acquire the weapons, but he was wrong, and went home unarmed.  He even blogged about how this set back his plans, which were clear as of 2002, when he published his 1500-page manifesto, “2083 – A European Declaration of Independence.”

Eventually he got both a hunting permit for the rifle and shotgun as well as competitive shooting permit required for pistol ownership, which takes a minimum of six months belonging to a shooting club.  That was in September of 2010.  Then in December, and in March of this year, he purchased the necessary chemicals to produce a fuse as well as an ammonium nitrate fuel oil bomb, from Poland.  This was ostensibly legal as he was the tenant of a farm, the chemicals fertilizer, but nonetheless Polish intelligence contacted Norway, where he was temporarily put on a watch list before being cleared.

Did they even google him? 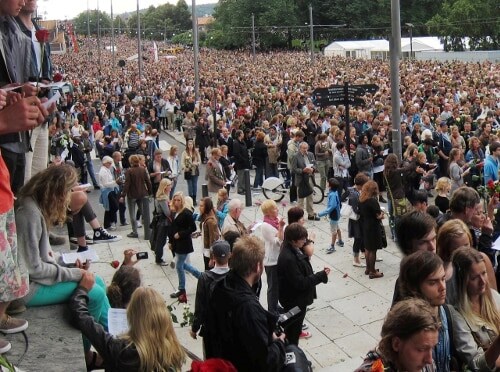 It’s not important that he used a Ruger Mini 14.  By his own account, this was not the rifle he wanted to arm himself with, ideally.  He originally wanted an illegal AK-47.  It doesn’t really matter that he wasn’t able to get one, he certainly wasn’t in the right country for it (the Czech Republic is the proud home to the Vz. 58 assault rifle and could care less about what Kalashnikov brought to the table) and he’d probably have better luck if he’d gone to Russia or even Finland.  No, he wanted an assault rifle and grenades, which he never got.

It’s not important that he used a Glock (model unnamed as well) along with extended magazines purchased from the U.S.  He probably just got a deal; there’s no reason he couldn’t have purchased them from other countries where they are also legal, including Norway.  Even if they were illegal, he clearly was willing to smuggle arms into the country, he even preferred to, and magazines can be modified to add rounds to them.

It’s not important that he used special bullets: as a matter of fact, there’s nothing special about his ammunition selection except for the fact that he purchased frangible bullets.  Contrary to popular beliefs, frangible ammunition is not designed to cause exceptional damage, but rather, the opposite.  Frangible bullets have stressed faults in them which cause the bullets to break apart easily (some are completely pre-fragmented) and are designed to cause less damage than other bullets.  Frangible ammunition is what Air Marshals use on planes to prevent shooting through the aircraft or through the passengers.  Sometimes they’re even referred to as safety slugs. 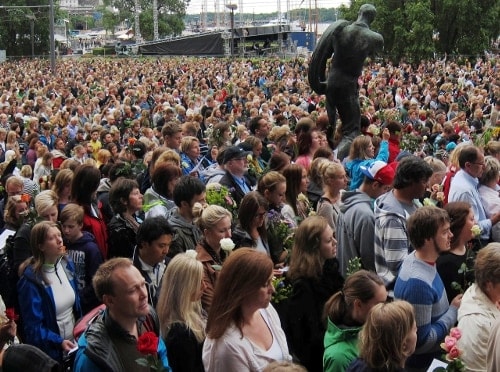 It’s not even important that he was able to rent a farm and acquire the supplies to manufacture a multi-hundred pound bomb.  Even if by some miracle all of the weapons he used to kill 76 people were not only illegal but impossible for Breivik lay hands on, he would have gotten something else to kill people.  He would have used molotovs, he would have derailed passenger trains, he would have killed with stone tools if it came to that.

Because those things aren’t the business of killing, they’re just its currency.  In order to ever understand Breivik and those like him, and deal with them and maybe prevent killing sprees, we waste our time focused on how they did their killing, at the expense of focusing on how they got away with killing and all the things leading up to that critical day.

If there ever was a poster child for the perfect domestic terrorist, it’s Breivik.  He’d spent years, years, writing about his Aryan mission, telling all who would listen about his great plan, raising funds for his “martyrdom.”  Among his tools were the Internet, where racism takes on a different color.  On the Internet, people rarely think that the people they’re talking about are real, human beings.  It’s easy to be outrageous, flamboyant, and hyperbolic. 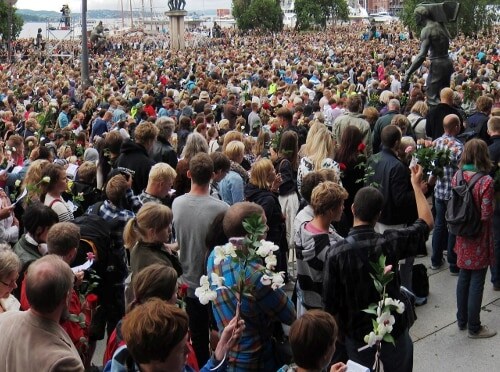 And racism is one of the tools he used to get away with murder.  It wasn’t just what fed his hate, it generated noise for him, made him hard to spot.  Norway has problems like all nations, and one of them is racism.  Antisemitism.  Xenophobia.  Anti-Islamic sentiment is a growing problem, not just in Norway but all across Europe.  But in this case, it’s so much a part of Norway that when someone said on the Internet, “I’m going to kill Muslim sympathizers,” and made videos of himself armed, getting ready for his special day, that instead of setting off alarms it just faded into the background.

But let’s say he never made a peep.  That he was the perfect single-person cell, and that no one is at fault for letting him slip through the cracks.  His bomb only killed eight people—in effect, just a distraction.  Eight is still a tragedy but that leaves 68 people at the kid’s camp as having been shot to death.

Sixty-eight people, children.  He was left undisturbed in the confusion.  It took Norwegian authorities 50 minutes to even respond to reports of gunfire at the island of Utøy, 20 minutes to drive to the coast, and 20 more minutes to get a boat and get over the water.  An hour and a half. 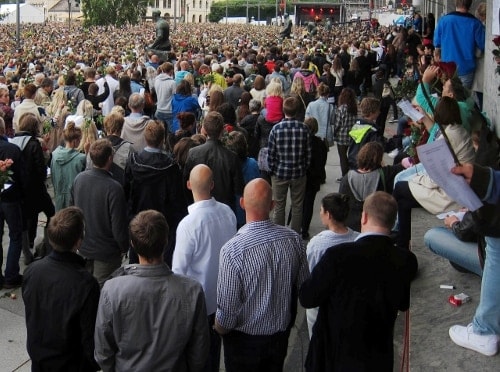 There are three reasons for this.  Firstly, the Norwegian authorities ordered people to get off their phones, to not call in emergencies.  In theory this was to prevent people from overloading the emergency service call centers, but telling people to not seek out help is unthinkable.  Secondly, the police did not have any helicopters ready, let alone helicopters to pull people off the island.  They had no police near the island nor the means to respond to it quickly, let alone in force.  And finally, after the bombing of the Prime Minister’s office, Norway went on lock-down.  The authorities responded only to the one area, they were gearing up for the possibility of more blasts, not a multi-level terrorist operation.  They didn’t have a plan, they didn’t act.  That was Breivik’s greatest tool.

It won’t ever be possible to predict and intercept every single terrorist, domestic or otherwise.  Even the ones that telegraph their intentions and raise all the important flags will sometimes be successful.  What’s important is how we respond to terrorism, both in the immediate and the long term. 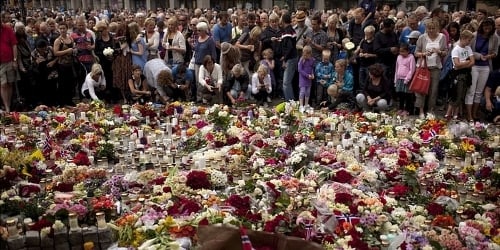 Norway failed in the events leading up to and during Breivik’s attack.  Breivik was a race supremacist, a hate-monger, a lit fuse.  But they can refuse to give in to terrorism.  For many, this will mean fighting to keep their civil and gun rights, for others, developing a more effective way to respond to terrorism, but for even more, it should mean the death of hatred.  To overcome the attitudes that allowed one madman to reach a flashpoint and to go unnoticed until it was over.

Our hearts and minds go out to all of the victims and their families of Brevik’s rampage, and to all of Norway.