Admittedly, the title of this article is slightly sensationalized.  That said – France is indeed purchasing pseudo-weapons technology from Israel for the first time in more than 40 years.  It was officially announced several days ago that France would be buying the Heron TP  (Eitan) from Israel Aircraft Industries (IAI).

The Heron TP (Eitan) is an unmanned aerial vehicle (UAV) that can fly up to altitudes of 40,000 feet and can fly continuously for more than 45 hours.  Although the wingspan of the Heron TP is large, roughly 26 meters, and it can support 1,000 kilograms in payload, the primary purpose of the drone aircraft is to carry out reconnaissance missions.  Nevertheless, some insist that its utility can be expanded to include missiles and missile guiding systems making it ideal for remote military air strikes. 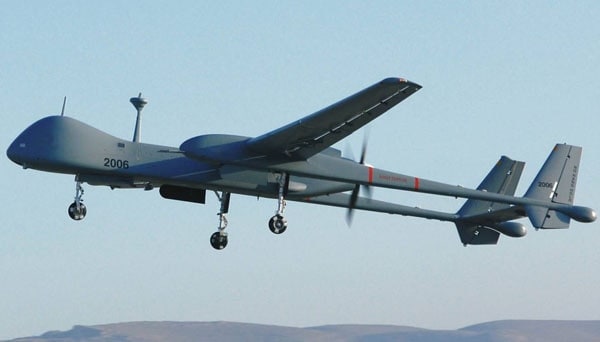 According to reports, this is the first time the Heron TP (Eitan), which has been in formal service operation in Israel for just over 18 months, has been sold to a foreign nation.  The deal between the French government and the IAI is said to be worth approximately $500 million.

There is also some historical significance behind this agreement.  During Israel’s fledgling stages in the arms race, France was the only nation that provided airplane parts to Israel.  In fact, according to Jewish News, “The first Israeli jets, the Eagle, Kfir and Lavi were designed and built based on the French Mirage jet.”

But this arms arrangement between Israel and France changed following the 1967 Six Day War when Charles De Gaulle, the presiding French President at that time, terminated the arrangement and implemented a weapons sales embargo with Israel.  This sparked Israel to invest more time, money and resources into its Aerospace Industry.

After several decades of attempting to build state-of-the-art fighter jets, Israel soon realized that this task was best suited for its well-heeled ally and new weapons trading partner the United States.  But, the lessons learned from those early attempts (the Eagle, Kfr, Lavi) turned out to be very useful in the development of UAVs – a niche within the Aerospace Industry where Israel has become the vanguard.