Gunfights on Guns.com: Shootout at the Tunnel Saloon

Sometimes good help is hard to find, no more so than in the case of tough-as-a-coffin nail Arizona lawman Pete Gabriel who ended up getting in a gunfight with his former deputy, Joe Phy.

Pete Gabriel was a seasoned lawman who had already been in more than one scrape and as the old saying went, had learned to “kill his own snakes.” In 1870 he got into an argument with a gambler named Boyce and proceeded to shoot him three times, one bullet hitting Boyce in the head. Unfortunately one of those bullets ended up in the thigh of an innocent bystander.

Four years later Gabriel was shot in one lung trying to evict a horde of squatters with a posse. The doctor pronounced him as good as dead, but Gabriel was one tough hombre.  He fully recovered and went back to work as a lawman.

Gabriel drifted around for the next few years, working as a lawman in various places, and then settled down and was elected the sheriff of Pinal County. In 1883 he hired thirty nine year old Joseph Phy as his deputy, himself a veteran of law enforcement work as well as a notorious Indian fighter. The two men became pretty close, but both were known for being ill tempered, something that would prove disastrous.

Another thing Gabriel was known for was his ability with a revolver. The district attorney said of Gabriel “It was no trick at all for him to knock over a jackrabbit some fifty yards distant while he sat in a buggy driven at a rapid rate.” Gabriel’s skill was equally well proven on a man named Ramon Saratega who when trying to be arrested fled from the lawman on horseback. Gabriel fired a single shot; the bullet passing through the small of Saratega’s back and stopped in the head of the horse he was riding. Saratega’s mode of transportation died on the spot.  He departed this life the next day.

In 1886 Gabriel decided not to run for sheriff and put his support behind his deputy Joe Phy. His enthusiasm quickly waned though when Phy beat a teamster senseless and then pulled his gun on the locals who were watching the spectacle. A warrant was issued for Phy and Gabriel withdrew his endorsement.  Consequently, the election was won by Phy’s opponent and the grudge was born. The two former co-workers became bitter enemies.

After several near run-ins, the two men finally went at one another on May 31, 1888 in the Tunnel Saloon in Florence, Arizona. Phy was considering running for sheriff once again, and rumors were abounding that Gabriel was also going to throw his hat in. Joe Phy was not happy to hear the news. 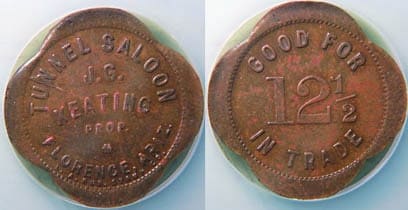 Pete Gabriel was in the Tunnel Saloon enjoying a nightcap when he saw Joe Phy peering in the window after he was tipped off to Gabriel’s whereabouts. Gabriel had his .45 revolver in his waistband ready to go. Phy stepped in and the gunfight commenced, scattering those present and blowing out a lamp. One bullet from Phy’s revolver shredded Gabriel’s right lung and another perforated his gut and intestines. Despite being badly wounded Gabriel stayed on his feet as the fight spilled out into the street. Phy was hit in the left thigh and then his stomach before he hit the ground. Gabriel then put one round down through Phy’s left shoulder and both of his lungs. All in all a total of eleven rounds were fired in a couple of seconds.

Joe Phy died only a few hours later, nothing could be done for him. When the doctor finally got around to treating Gabriel, he told him that he was a dead man. Gabriel had heard that before, and like before he pulled through and recovered enough to be back working as a deputy sheriff only six months later.

He later took part in the hunt for the Apache Kid and eventually put up his tin star for good to take up mining. He never really got over the killing of Joe Phy, and he was haunted for the rest of his days by recurring nightmares. Pete Gabriel died on July 30, 1898 from drinking bad water while mining in the Dripping Spring Mountains, an inglorious end to a man who had such a glorious career.