Kfar Sava policemen saw smoke and assumed there was fire when they entered the home of Zeev Galili, the son of famous Israel weapons inventor and Prize laureate Yisrael Galili.

When the police arrived at Galili’s home to answer a call over a domestic dispute issue, Galili handed over his personal sidearm, a licensed revolver, to them.  This is the customary procedure in Israel when an individual is accused of being involved in a domestic dispute. 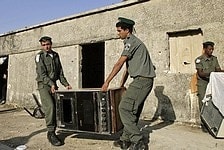 Galili also mentioned to the police that he had additional firearms at his parents’ house nearby.  The police followed Galili to his parents’ home and were shocked to find 38 revolvers and 12 rifles boxed up, ready for shipping.

The police knew – right then in there – that they had just apprehended one of the Sharon region’s biggest arms dealers.  They called for backup and Galili’s home was soon swarming with policemen.

However, there were a few facts they failed to consider.  The most obvious being Galili’s father being one of the pioneers of Israel’s defense industry and the inventor of the Galil rifle. 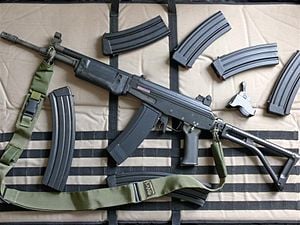 In an interview with Haaretz, Galili explained the misunderstanding, “These guns were displayed on the wall for many years, my father collected them, but now we’re moving house, so they are being packed into boxes. What amazed me was that not one of them understood who my father was and what his connection was to these weapons.”

Despite his protestations and explanations Galili was brought in for questioning, along with his weapons cache.

“They have no idea what kind of weapons these are or how to care for them,” Galili told Haaretz. “One gun belonged to a Nazi officer and has an engraving of a swastika. Another was my grandmother’s gun. There’s a revolver there that my father built 80 years ago. Most of the guns in the collection are unique and can’t be found anywhere else in the world.” Another discrepancy the police failed to consider was the fact that all of the arms in the boxes were non-functioning.  Many were either welded shut or bisected to display their internal mechanisms.

“There was a Jericho revolver there and the detective told me, ‘Look here, this is a Jericho and it can shoot,'” Galili told Haaretz. “The young policeman didn’t understand that it was the prototype of the Jericho, which my father received as a gift from Israel Military Industries. There were revolvers manufactured in many different parts of the world that were sent to my father for his professional opinion and kept as souvenirs.”

For Galili the worst part of the interrogation was the ignorance the police showed regarding his historical pieces.

“It was simply embarrassing to hear them talking about my father and his weapons. I sat there under interrogation for hours and didn’t know whether to laugh or cry. They took out a whetstone that my father used for his razor and claimed it was a detonator for a bomb. If my father had heard these people’s ignorance about the weapons, he would have rolled on the floor in laughter.”

Galili also told officials that although he had donated the majority of his father’s collection to the Israel Defense Forces Museum in Jaffa, he had kept this rather small collection for sentimental value.

“Now all the weapons are undergoing ballistic tests in Jerusalem,” he told Haaretz. “I don’t know how they’re taking care of them there, whether they’re throwing them around … It’s funny to think that weapons from 100 years ago and from World War II are now undergoing ballistic tests in Jerusalem to see whether they were involved in criminal activity. I can’t imagine any criminal from any crime organization pulling out a Mauser that belonged to a Nazi officer in World War II.” 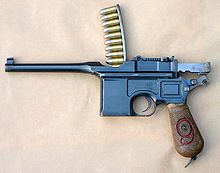 Despite his pleading and his very reasonable explanation, Galili was detained for five days.  He was not arraigned in court.