Weapon Retention and Bathroom Etiquette: Protecting Your Weapon in a Public Restroom

Police officers encounter many situations that the average Joe Citizen can learn a lot from. Here’s one such example:

Recently I learned about a police officer in Tennessee who went to relieve himself in the small bathroom of a local coffee shop. While standing there doing his business, a man he described as “homeless” decided to get a little too close for comfort.

At this point in the story, I’ve just gotta say: Come on, Mr. Homeless Man, everyone knows that there are two places where you never get too close to another guy—at the ATM and at the urinal. To make matters worse, you’re messin’ with a guy who might kill you for it! 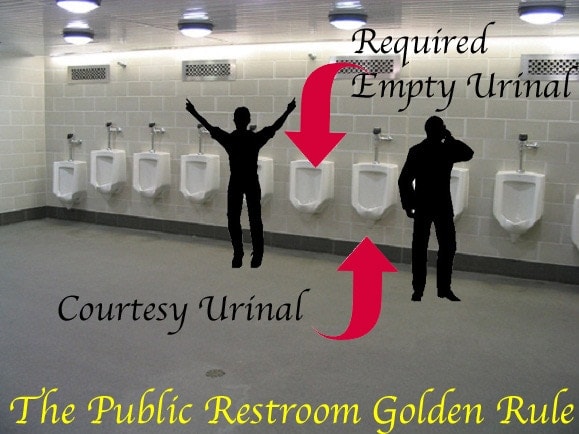 So there stood the uniformed officer with his hands occupied when Mr. Transient crossed that invisible line and got too close. Accordingly, the officer, well aware of the danger someone crowding him from behind while his sidearm is exposed (not to mention other stuff), verbalized his desire for the man to back off. When the man came even closer and attempted to disarm the officer, the officer drew a knife and stabbed his attacker in the leg.

Well aware of what kind of damage can be caused by a guy willing to disarm him, the officer would have certainly known—both from his time on the beat, working the streets, and from the police academy—to keep his pistol in his holster and away from the suspect, even while attempting to stab the man with nefarious intent.

Now, I’m not a lawyer and I’m not a Judge, but as far as the law is concerned, this incident appears to be an easy open-and-shut, case of justifiable Don’t-touch-my-gun-while-I’m-peeing-or-I’ll-stab-you-in-the-leg. That is, unless the guy who now knows what it feels like to be stabbed in the thigh hires a team of lawyers good enough to get Casey Anthony acquitted. 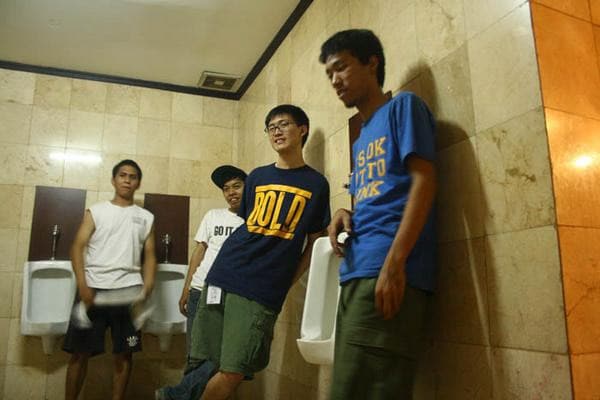 Frankly, I can think of three words to describe the situation the officer found himself in at the public restroom at the local coffee shop: odd and uncomfortable. Wouldn’t you feel odd and uncomfortable too? Shoot, I’ve felt uncomfortable when, in foreign lands or among Americans who don’t understand spatial awareness, someone gets in my personal space.

But it seques into an important aspect of personal defense when you’re armed: you’ve got to stay armed.  The best start to keeping your gun in your possession when carrying is to envision and then remember your concentric circles of safety—invisible areas around you that correspond to different deadly scenarios and inform what you deem to be appropriate or innocuous behavior from the human beings around you. Picking up on cues is key here. The officer noticed the threatening behavior and subsequently used another great tool at his disposal to keep the suspect from disarming him. After all, a knife is a great option for weapon retention. 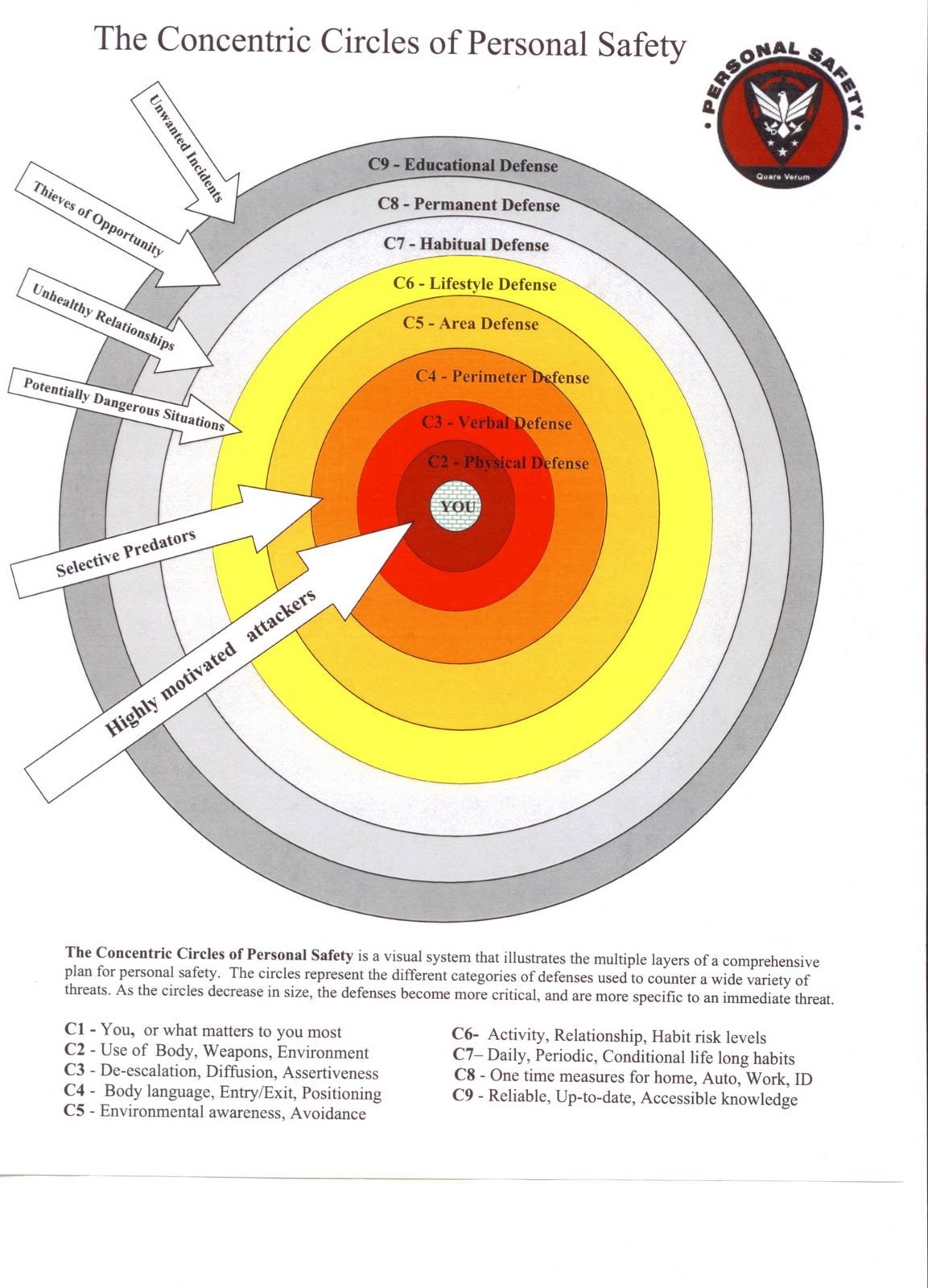 The attempted-disarming incident at the urinal reminds me well of my first SWAT hostage rescue call-out. One of our plain clothes officers, who had his sidearm concealed on his hip, was escorting a very dangerous prisoner to the hospital. Unfortunately, while the officer was relieving himself, the prisoner whose hands were cuffed in front, rushed the officer. The officer’s face and body were slammed hard against the porcelain urinal and the prisoner was able to disarm him, taking him hostage. Fortunately, the officer wasn’t killed.

Now, back to the Tennessee coffee shop bathroom fiasco…

As I see it there are at least a few valuable lessons can be learned form this unfortunate situation.

1) The officer was well aware of his surroundings. He didn’t get tunnel vision while concentrating on “other matters.” The officer had heightened awareness, an absolute for personal safety.  This allowed the officer to notice someone sizing him up and eventually allowed the officer to clearly see a dangerous situation where a threatening individual was telegraphing his intentions via furtive movements and gestures. 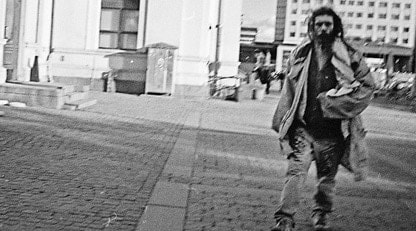 Your safety, and mine, depends upon us noticing threats and acting quickly before being surprised. A certain level of vigilance, especially when armed, is paramount to our safety and survival.

2) The officer didn’t treat the attacker as someone who was simply joking around. Even if the “homeless” man was a 5-foot nothing, 98lb staggering drunk (which there’s no indication that he was), the officer treated the aggressor as a credible threat and reacted as if his life depended on it—because it did.

Remember, sometimes the people we deem as least likely to harm us will be the most credible threat, all other reasonable circumstances aside.

3) The officer’s tactics were sound—at least, insomuch as we know from the brief report. We can delineate, from the totality of circumstances, that he protected his weapon first and foremost, even before using another weapon (a blade) as a counter defense. If the attacker would have grabbed his gun, it would have turned into a knife vs. gun fight that could have proved fatal for the officer.

Use every means at your disposal—use every tool within your “tactical toolbox”—to keep another individual from disarming you. If your weapon is in your holster, do all in your power to keep it there. In this circumstance, a knife jab to the leg kept the situation from getting much worse. 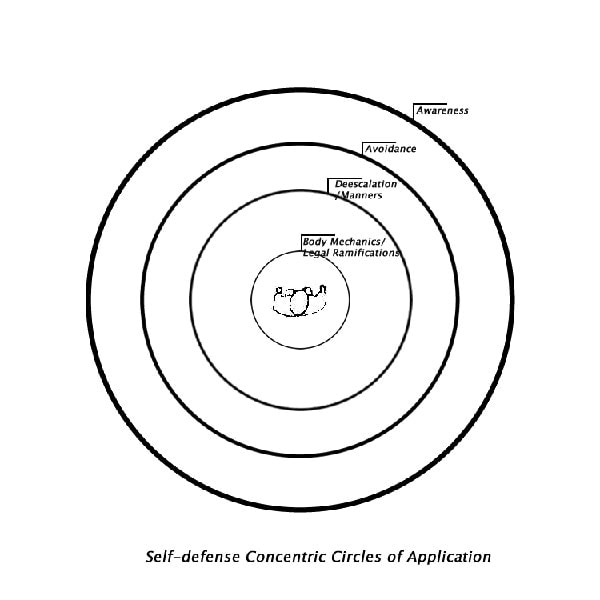 Remember, don’t let anyone disarm you. Be aware of your surroundings. Shoot fast and accurately, if you need to. Lastly, do all you can to keep your weapon in your holster and away from an attacker should an attempt to disarm you occur: That’s the number one rule of weapon retention.

Finally, don’t worry much about the guy who got stabbed in the leg by that alert police officer in the coffee shop restroom. Yes, I’m sure the guy will recover from his stab wound.  Hopefully he’ll stand back a little the next time he sees an armed man at the urinal.