Although mounted police may be considered by many a vestige of times gone by, Marquise Robinson – an assistant police horse trainer – says an officer on a horse is worth 10 on the ground. When it comes to crowd control or covering a lot of ground in urban areas, these equestrian-officer tandems serve their purpose, and then some. 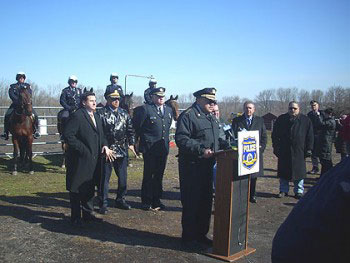 And thanks to a 2010 federal grant of $350,000 from the Bureau of Justice Assistance, Philadelphia’s once-defunct mounted police unit is getting back on its feet. A once-prominent and well-funded operation that spanned a 32-year period and peaked at 190 horses, Philly’s mounted police division had dwindled to a force of just 19 horses and 17 officers by 2004.

As a result of budget cuts, improved technology, and the transition of officers from horses to other forms of transportation like bicycles, officials were forced to cut city’s mounted police unit in 2004, meaning horses and equipment were auctioned off and officers reassigned.

Nobody is more familiar with this process than Dave Toth, a veteran with Philadephia’s mounted police unit who began his tenure in 1999, only to have it cut short when the program became defunct. When the program was shut down, Toth was reassigned to airport duty. Now literally back in the saddle for the first time in years, Toth is eager to pass his knowledge along to new trainees. 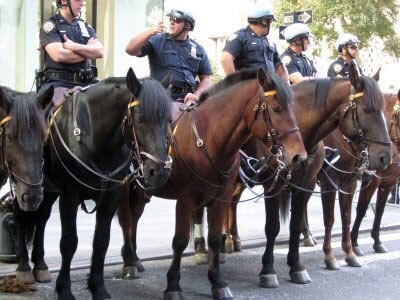 Says Toth, “Nobody ever stops learning…If you spend five years with one horse, then you work with a different horse, it’s back to Square One.”

Lt. Dan McCann, the unit’s commanding officer, hopes to increase the force to 12 horses by the end of 2011, with a goal of 25 horses in the near future.

But the process of rebuilding the unit is not easy. Says Robinson, “Whenever you auction off all your stuff, you’re starting from scratch…Whatever people give you, you’re willing to accept it.” And the unit welcomes donations of any kind. Indeed, a recent donation of two horse trailers from Jimmy Binns, founder of CopWheels Inc., will allow the unit to transport horses to and from various facilities.

A second-year state grant of $100,000 will help to offset costs, and the unit plans to fund operations with grants and donations until the mounted police division is included in the Philadelphia city budget in 2013, said chief administrative officer Nola Joyce. 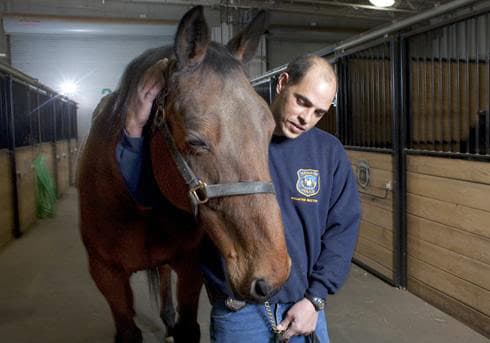 The force is also looking forward to relocating its stables in the coming weeks, moving from Ambler Park – an hour’s drive – to Pennypack Park. The latter facility is just a 15-minute commute.

A permanent move to a more ideal location also appears imminent. According to Everett Gillison, deputy mayor for public safety, officials plan to either renovate an existing facility of build a new one, either of which would be capable of housing 42 horses.