The hacker collective Anonymous has been following what’s been going on in Syria, and like most of the world, is upset by what they see.  Unlike so much of the uprisings following the Arab Spring, Syrian “rebels” have remained non-violent, at least for the most part, in the face of being labeled criminals and killed by the military.

Months and months of protests against President Assad and the current government have ended the same way, with snipers breaking apart the crowd and then cavalry to round up and arrest (and sometimes run over) the protesters.

Even Turkey, the only ally Syria has left, has plead with Assad to stop killing the protesters, and is likening Assad to Saddam Hussein.  So what’s a pan-global hacktivist alliance supposed to do?  Why yes, deface the Defense Ministry’s website.  Like you do.

“To the Syrian people: The world stands with you against the brutal regime of Bashar Al-Assad. Know that time and history are on your side—tyrants use violence because they have nothing else, and the more violent they are, the more fragile they become. We salute your determination to be non-violent in the face of the regime’s brutality, and admire your willingness to pursue justice, not mere revenge. All tyrants will fall, and thanks to your bravery Bashar Al-Assad is next. 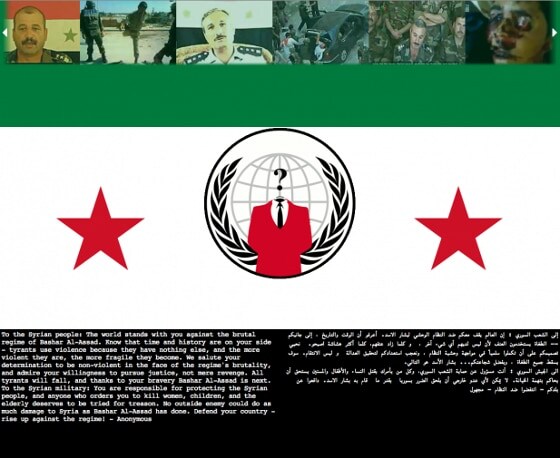 “To the Syrian military: You are responsible for protecting the Syrian people, and anyone who orders you to kill women, children, and the elderly deserves to be tried for treason. No outside enemy could do as much damage to Syria as Bashar Al-Assad has done. Defend your country—rise up against the regime!—Anonymous”

From a technical standpoint, it’s not a super-difficult thing to do.  Anonymous by definition doesn’t have what you would call “leaders” and this is probably just a few people doing what they did because they could do it.  Randall Munroe sums it up very well:

But it sure struck home with the Syrian government-slash-military sympathizers.  Shortly after their website was defaced, the Syrian Electronic Army turned to Anonymous’ social networking site and made turnabout into a little fair play, making AnonPlus read:

“In response to your hacking to the website of the Syrian Ministry of Defence, the Syrian people have decided to purify the internet of [y]our pathetic website.  Your website has been hacked, and here we leave you these photos showing the scale of terrorism committed by Muslim Brotherhood Organization, whose members have been killing Syrian citizens—civilians and military.

“You are defending this terrorits [sic] organization and this is our response.. here is photos of the Syrian Army Martyrs.”

This non-governmental tit-for-tat is pretty funny, you have to admit at least that.  But it shouldn’t be said that it does nothing for the protesters.  It calls attention to them in a fast media cycle.  Even the Syrian Electronic Army, by attacking Anonymous, draws attention to the fact that horrible things are going down between the Syrian government and its people, and the struggle for stability in Syria.