One of our recent fascinations here at Guns.com has been the airsoft shotgun shell.  Each shell is a self-contained unit that holds five or six 6mm BBs in a row in a little barrel, and has a push-button actuated valve in the primer area releases its small gas charge (propane, CO2, it doesn’t matter) firing the BBs with considerable force.  Considerable enough that getting shot probably is something you’d want to avoid.

Now these shells are refillable and reloadable.  They’re good for many, many uses.  They’re also the same size and shape as a real shotgun shell and can be fired from real shotguns.  This is ill-advised under the cautionary warning that it could damage the chambers of firearms.  (We’re not a hundred percent sure that’s true since they look like they’re made with aluminum and plastic bodies with brass shell areas but whatever, warning heeded.) 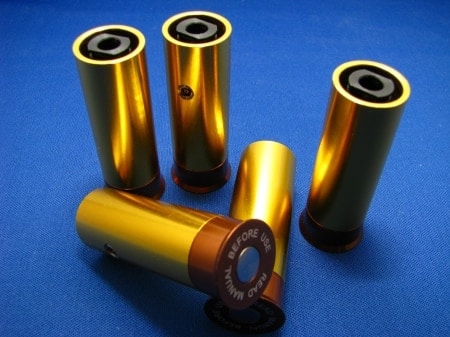 But they can be shot with real shotguns, and Mad Bull is working on trainer shells just for that reason.  “NOTE: Don’t apply to real gun or it will be damaged real gun chamber.  Shotgun shell[s] for real gun training will be available soon.”  But, uh, is that a good idea?

Look, we believe that airsoft guns should be, in general, treated the same way as any firearm.  Keep your finger off the trigger until you’re on target, know what’s behind your target, every gun’s loaded and all that.  But eventually, you’re going to point it at a real person and go to town on their unsuspecting hide; and you’ve only got yourself to blame if you actually shoot someone.

And the fact that you’d be carrying around a real shotgun at a game itself poses all kinds of potential problems.  “No, officer, I was just going to shoot my friends with this, it’s only dangerous if I load it!”

And yet, they really do introduce a fascinating new way to practice with your pump-action shotguns.  They clearly have municipal value as a training aid for the military and the police, and they’re tons cheaper than ammo, and that, and we feel this shouldn’t need clarification but this is the Internet, should not be shot at friends.

If they come out with airsoft shells for real shotguns, would you buy a box?