There’s an old gun adage that most any youngster hears when learning to handle a firearm: Never point a gun at something unless you are willing to shoot it. Unfortunately for Rachel Avila – and even more unfortunately for her daughter – the Banning, California woman did not realize she was handling a gun. Rather, the 30-year-old mother thought she was merely picking up a lighter when she tried to light a cigarette.

According to the Banning-Beaumont Patch, instead of grabbing a lighter, Avila picked up a .22-caliber North American Arms revolver, pulled the trigger twice, and fired the derringer-style gun. The result was a ricocheting bullet that eventually became lodged in the arm of Avila’s 12-year-old daughter.

Banning police initially ruled the shooting an accident, and also released a photo of the smoking gun. In a statement, Banning police stated that they received a report at 5:40 p.m. regarding a “juvenile gunshot victim” who had been taken to San Gorgonio Memorial Hospital. 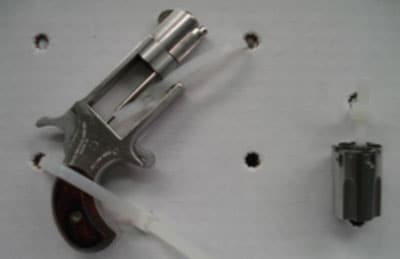 Avila later told police that she and her daughter had been chatting with friends in front of their mobile home on North Phillips Avenue when Avila noticed what she believed to be a novelty “gun” cigarette lighter on the ground. Avila told police she then pulled the trigger, but nothing happened. After Avila pulled the trigger a second time, the .22 caliber gun fired, sending a bullet ricocheting off the ground and upward into her daughter’s arm.

The daughter was treated and released, and police said the case was still under investigation. Said Banning police, “Do not handle the object and call local law enforcement for assistance.” 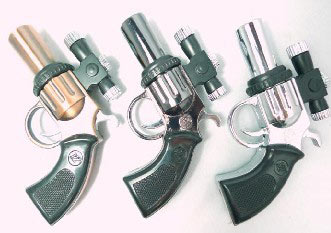 Banning police Sgt. Alex Diaz stated, “We’re trying to find out who the gun belongs to, so we’re looking into that. At this point it [the shooting] is considered an accident.”

The police department also encouraged residents to observe caution in the event that an object resembling a gun is found. Anyone with information regarding the incident is asked to call the Banning police Detective Bureau at (951) 849-1194.