The Hickok-Tutt Gunfight: The One That Started It All

The High Noon shootout; the showdown amongst gunfighters where both try to outdraw their adversary in record time, it’s been a staple of Western movies and Dime novels since the days of Ned Buntline, and it all started with one gunfight between legendary pistolero Wild Bill Hickok and Davis Tutt.

James Butler Hickok as he was known before fame truly found him was in Springfield, Missouri on July 21, 1865. The evening before he had been with one Davis Tutt, who at one time had been a friend to Hickok. Disputes over women and other minor issues had put the two men on the outs, however it would be a card game that proved the feather in the cap of animosity.

Both men were professional gamblers and the stakes were high that night. Hickok had taken around about $200 of Tutt’s cash, a tidy sum in those days. Tutt though played a wild card by reminding Hickok that he owed him $40 from some horse trading, and Wild Bill paid up.

Tutt though threw out the debt of another $35 which Hickok disputed. Tutt quietly reached over and took one of Wild Bill’s most prized possessions, his gold pocket watch. Hickok knew better than to do anything there and then since the others at the game were friends of Tutt’s. He did however warn Davis Tutt not to be seen with that watch in public, Tutt scoffed and said that the next morning he would be wearing Hickok’s watch.

Sure as there is church on Sunday, Davis Tutt was out the next day wearing that gold pocket watch in the town square, and it did not take long for word to reach Hickok’s ears. At about six or so in the evening Wild Bill arrived in the town square with his Colt .36 Navy in hand, the sight of which cleared the people quickly out of the way. Tutt was standing across the square at a distance of 75 yards. Hickok thumbed the hammer back on his 1851 Colt and holstered it, warning Tutt not to cross the square wearing his watch. Tutt, who at the time was considered a better shot than Hickok said nothing but placed his hand on the butt of his own revolver. 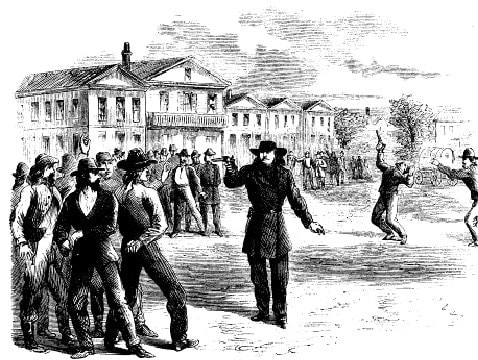 Both men faced one another and then drew their guns, both men standing dueling style. Hickok however steadied his revolver on his left forearm while by all accounts Tutt was only using one hand. After a slight pause both men fired at nearly the same instant. Tutt’s shot missed, Wild Bill’s connected from an astounding 75 yards, hitting Davis Tutt in his left side squarely between the fifth and seventh ribs. Tutt staggered to the nearby courthouse and street before collapsing and dying, calling out “Boy’s I’m killed.” 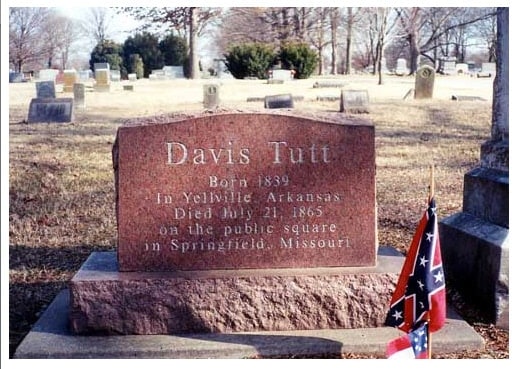 Wild Bill Hickok was placed on trial and was acquitted of all his charges, with many witnesses testifying that the two gunshots fired were so close together they sounded as one. It was after the events of Wild Bill Hickok’s gunfight with Davis Tutt that the gunfight became synonymous with the fast draw, and the myth of the Wild West began to be spun.

Hickok later met his own fate as the result of another card game in Deadwood, Dakota Territory on August 2, 1876 when he was shot in the back of the head in Nuttal & Mann’s No. 10 by Jack McCall.