Two years ago, Charter Arms announced their plans to introduce to the world their Rimless Revolver, due for public consumption in late 2010.  Well as it turns out, making guns is hard.  They’re running behind schedule.  But they’re still at it, with one of the most interesting revolvers since the Rhino.

Now called the Pitbull, this revolver, chambered in .40 S&W, headspaces ammo off the case mouth, and when you close the cylinder, spring-loaded extractors built into the ejector pop out.  They stay out until you open the cylinder and eject the cases.  Cool, right?  Well, we think there could be some improvements.

First off, it’s in .40.  Look, we’re not bitching here that it isn’t a 10mm, but keep thinking metric.  Why isn’t this in 9mm to start?  Charter Arms’ argument is that the Pitbull’s target market is for police officers looking for off-duty and backup guns; since the majority of police shoot forties (citation needed?) it makes sense to give them a revolver that shoots the same cartridge.  Except the majority of cops don’t have to worry about ammunition, so this is a non-issue. 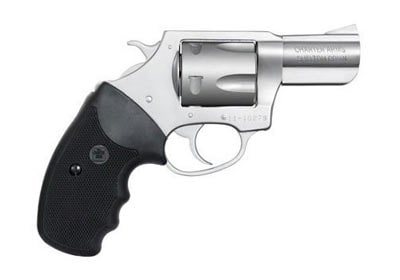 Chambered in 9mm the Pitbull would fill in a huge gap left in the wake of the discontinuation of nearly every revolver in Parabellum.  That alone would drive the throngs into a buying fury.

Then there’s the size.  Yes, we know that’s Charter Arms’ specialty but the small revolver segment has more variety and competition going for it than just about every other part of the market.  The service size revolvers, not so much.  You can get a good S&W for a lot, a good enough Taurus for much less, and a nice, heavy Ruger in-between.  And none of them shoot rimless with much aplomb.

A six-shot 9mm (or .45, or better yet, both) service revolver with good sights and even a halfway-decent double-action would be gangbusters.  Follow that with a .40, and follow that with a BUG.  Charter Arms wouldn’t be able to keep them on shelves, and the press and word-of-mouth at gun games would be endless.

All that being said.  We’re, like, super-excited about this revolver.  Ants-in-pants proportions, here.  Their extraction system looks great, the fact that it uses speed clips and not moon clips is just boss, and Charter Arms isn’t a slouch when it comes to inexpensive, reliable, and suitable pistols.  So chop-chop.  We want to play with your dog.