It seems like just yesterday the Internet world lit up over the introduction of the 500 Chainsaw, Mossberg’s top-handled, pistol-gripped shotty destined for the best zombie movies yet to come.  While appealing for a bunch of reasons, some would argue, and we’d have to agree, that it’s not exactly the most practical design for all applications.

With the help of some of the most tactically-minded operators at Thunder Ranch, gunfighter trainers of Texas and Oregon, Mossberg’s juiced up their classic all-purpose 500 shotgun to satisfy some of the more staple requirements of modern pump-shotgun users.  They call it the Mossberg 500 Thunder Ranch.

After some speculation that they were working on a Mossberg 590-type shotgun, this comes as a nice surprise for the budget-minded.  It’s a middle-sized 12-gauge shotgun (13″ LOP) sporting an 18.5″ barrel with a standoff-type flash-suppressing muzzle device, a triple-rail forearm, a white-dot sight, and a recoil-reducing buttstock.  Oh, and the sling’s included.

The magazine holds five shots and the shotgun edges in at just under 7lbs.  And topping it all off is a sexy, gold-finished Thunder Ranch logo etched into the side.  The MSRP is a reasonable $460, which means real-world prices will be under four bills.  Priced as it is, with Thunder Ranch and Clint Smith signing off on this shotty, it stands to reason that a lot of people are going to like it.  We certainly do… 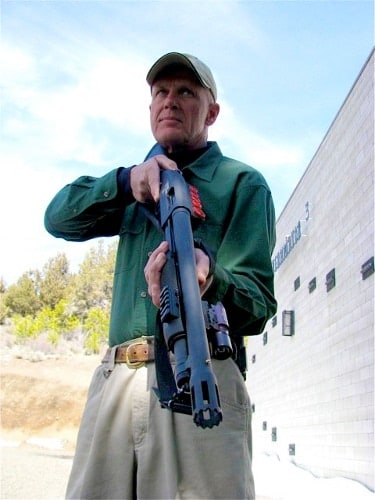