The Many Faces of the Fanner 50: America's Most Collectible Toy Cap Gun

One of the great pleasures of being a boy in 1958 was owning a Fanner 50 cap gun, despite the fact (or perhaps because of the fact) its’ main feature was the supposed ability to “rapid-fire” the gun by repeatedly slapping the hammer which is of course historically ridiculous.

“You could fan a real Colt pistol of the Old West, but you wouldn’t hit anything,” explained Bob Terry, owner of Toyguntown.com, a manufacturer of American-made cap guns based in Azle, Texas. 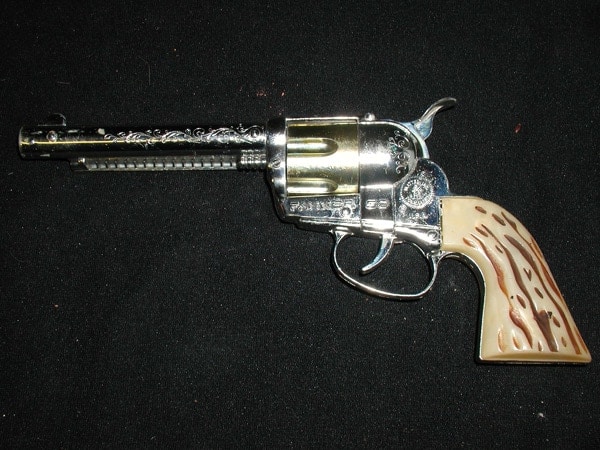 The principal of fanning a gun would also have violated the advice once given by Wyatt Earp.

“I do not know a proficient gunfighter who had anything but contempt for a (gun) fanner,” Earp said. “The winner of a gunfight is usually the man who took his time, who didn’t rush a shot.”

Nevertheless, the Fanner 50, manufactured by toy giant Mattel Inc., remains one of the most sought-after and collectible of all toy guns, especially if it’s in good condition and comes in the original box. 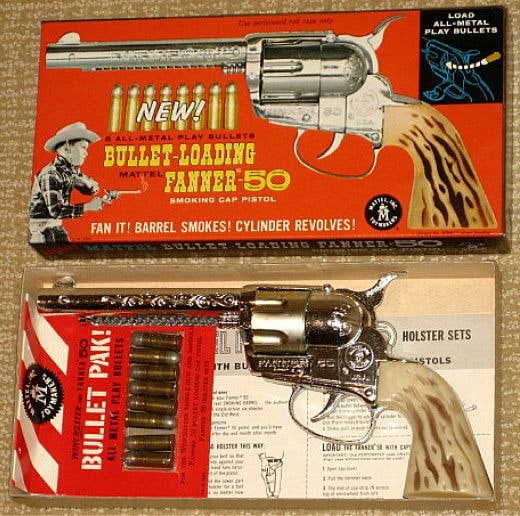 “It’s the most remembered and requested toy gun. It’s the gun that creates the fondest memories. The reason so many people had one when they were children was that Mattel launched a giant advertising campaign to promote them.”

Some of these old television commercials can be viewed today on the web. From the late 1950s through the 1960s, the Fanner 50 was made in 20 different styles.

There was even a Planet of the Apes Fanner 50 in 1968 with grips that were brown. An earlier model was inspired by the 1967 television show Cowboy in Africa with Chuck Conners (famed as TV’s Rifleman). Some of the pistols had decorative scrollwork on the barrel, and one even fired little metal cartridges. 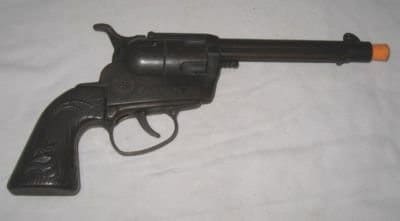 Called a Fanner 50 “Shootin’ Shell,” the gun, a single-action with rotating cylinder, featured a little spring that propelled low-velocity, .32-caliber-size metal cartridges much like a dart gun shoot darts. The range was only designed for across the room. 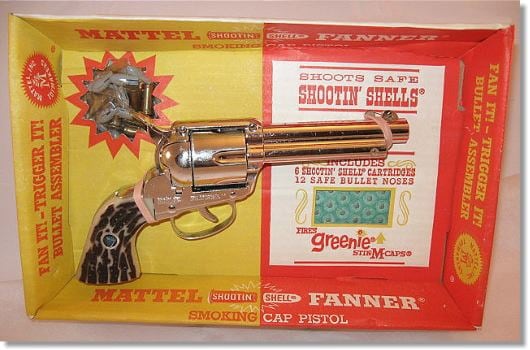 The classic Fanner 50 with its impala grips was realistic looking, the reason for its success.

“The rarer models if you have the original box can go for $700,” Terry said.

Mattel sets which include pistol, matching rifle and accessories plus bandoleers with toy bullets can be valued at $1,500.

Terry said he purchased 150 molds to make the most popular cap guns including the Bronco 44, famed in the 1940s and called the toughest cap gun in the world.

However, officials at Mattel have no intention to reissue the Fanner 50 and are not interested in selling the molds they possess to someone else. Purchasing such a mold could cost an approximate $250,000.

Terry said his interest is only in American-made models of cap guns and not copies being produced today in China.