Fabrique Nationale, spiritual inheritor of the John Browning legacy as much as the Browning company itself, never stopped innovating and contributing to the firearms world, both military and private.  They’ve armed more people than most manufacturers even dream about, and they do so by designing firearms that really do fit a need and design them well, build them tough and test the hell out of ’em, and finally, not kill anyone by sticker shock.

Not to say that they’re the least expensive manufacturer out there, far from it.  But they know the value of the dollar.  And the euro, and the pound, and the kroner, and the lita, and the peso, and the ‘nuck buck… While some of their more prestigious pistols cost quite a bit, the vanilla FNP and FNX service pistols retail for about four bills, and are poised to take over if and when all 5,000 countries that use Hi-Powers ever need to replace them. 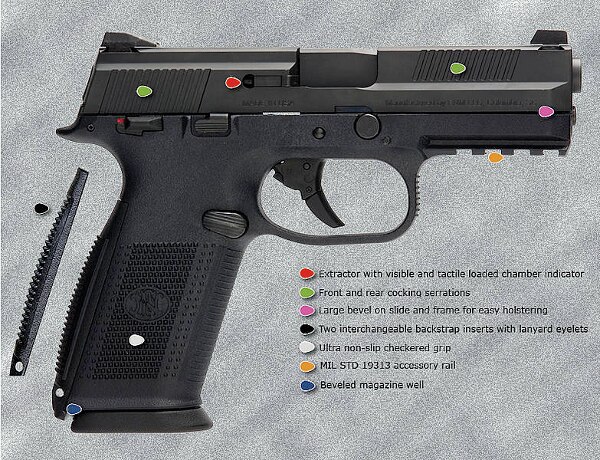 Although they might want to consider the FNS, now that FN has decided to start exporting and field-testing them.  Currently, they’re in the hands of about twenty U.S. agencies for testing and evaluation, and after any last-minute tweaks based on those observations, if necessary, and then presto, they’ll go on the market.  Prices to be announced, but since they’re going after police departments, we really don’t expect it to be over $500 with night sights; it just would not be competitive even with its excellent features. 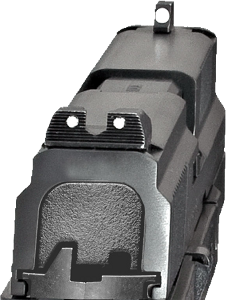 Speaking of. It’s a polymer pistol, no surprise there, particularly for a striker-fired handgun.  An increasingly common feature, it uses interchangeable backstraps, but will have up to four different styles, yes, styles, as one of the smaller backstraps is modeled after the 1911 GI-type flat mainspring housing.  That alone’s gonna get people to pick up this gun.  It’s got your four safeties, trigger, drop, out-of-battery, and firing-pin, nothing super-new there although the OOB safety’s nice.

The trigger safety might put people off since it’s of the hinged, two-piece trigger variety, but that’s also a draw for the few who have been pinched by Glock-style safeties.  Following the 1911 aesthetics, the whole thing’s got that wonderful FN grip checkering that digs in without being all sandpapery, and the safety/decocker, magazine release, and slide stop are in all the usual FN/1911 (1911-ish at least) places.  The magazine release is, as a matter of course, huuuuge.

Then there’s the best feature of all, the one that reeks of duty weapons everywhere: it’s fully ambidextrous.  All the controls have mirrored twins on the right side of the gun for both south-pawed and tactical needs.  No word on capacity but we’re willing to stake one kick squarely to the crotch that the FNS-9 will be of the 17+1 variety and we’d be surprised if the magazines weren’t interchangeable with the FNX.

And because the design of the FNS so closely resembles the FNX and FNP, it already has all the aftermarket support it needs to compete, in both martial and sportive ways, right out the gate.  So the question is, and this especially goes out to the fans of the Fabrique Nationale, are you picking one of these up on day one, and do you expect it to come home with you?