A match between the Santos and Morelia soccer teams in the Mexican state of Coahuila was the site of shootout involving police and presumably gang shooters two days ago, leaving one officer injured, but no other victims, except for maybe the game, which was suspended.

Granted, this is soccer, we’re talking about, or football if you’re a fan, so it was at nearly the mid-point of the game, score tied, 0-0.  We suspect they’ll be able to resume it without much bickering.  But it was the most important match in the Mexican Premiere Division, and with its crowd… not even a single injury was caused by the panic.

It is highly suspect that this is a result of the widening gang war between Los Zetas and the Sinola cartel, who have recently spread into Torreon from nearby Monterrey, adding it to the growing list of cities that the gangs have been fighting their drug war.  A pickup full of suspected gang members, evading police, got cornered in the stadium’s parking lot.  The shootout followed.

At the forty-minute mark of the top-flight game, gunfire outside the stadium sent people running for cover and players off the field.  “‘The public security vehicle was attacked by unidentified gunmen outside TSM and the preliminary information we have is that one policeman was injured,’ Olivas told Milenio TV.” 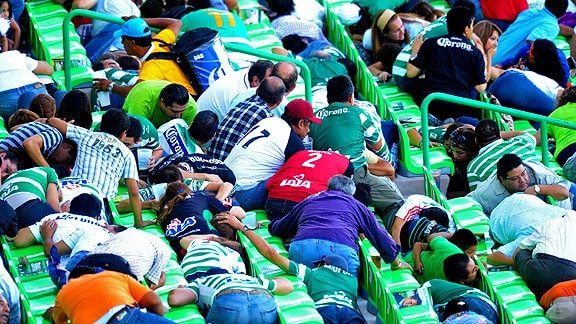 “‘In the Santos club, we feel bad for the time in which we are living. It is evident that the game will be suspended,’ Irarragorri told the crowd. ‘You can be assured that we will try to control these situations. We are sorry for Morelia, the referees and those who are visiting us from elsewhere.'”

At the very least the casualty was singular, although this sort of broad-daylight attack against police nutshells the scale of the ongoing violence fairly well.  But it’s hard not to wonder, at this point, how much longer the U.S. and Mexico can maintain their current tactics in trying to break the back of the Zetas.

Because no matter what our opinions are about soccer are, we are very much for shootouts not happening at sporting events, (not happening period, really) and we’re not sure doing more of the same is going to fix things.  We’re just happy it didn’t go worse.