Encouraging Adults to Play in the Rain: Another Umbrella that Will Get You Shot

At least, outside of its country of origin, because we’re pretty sure you could walk this thing through a London riot and be just fine.  And by fine, we mean kicked a bunch and robbed of your money and gunbrella, but you get the point.  Actually, this isn’t the first gunbrella we’ve come across, we found ones that look like rifles after a kid walking through a mall with a katanumbrella had a SWAT team dropped on him: 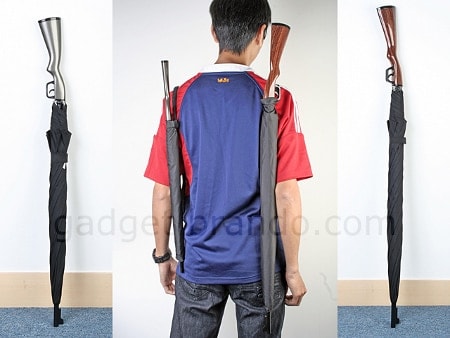 “And it’s not like they were storming Palau, here, either.  They were in a damn mall, where the kid with a sword’s pretty much the opposite of a danger, even if it were a real sword.  He probably had a backpack full of Pokemons and Pogs, I don’t know whatever dorky things kids do these days, but you know that fits the bill.  You definitely don’t go all Bobby Shaftoe on him.

“Anyway, you can find swordbrellas online pretty much anywhere for around thirty bucks, see, here’s one that looks like a cavalry sabre.  Thirty bucks is the going price for novelty umbrellas, much like these umbrellas that actually look like rifles.” 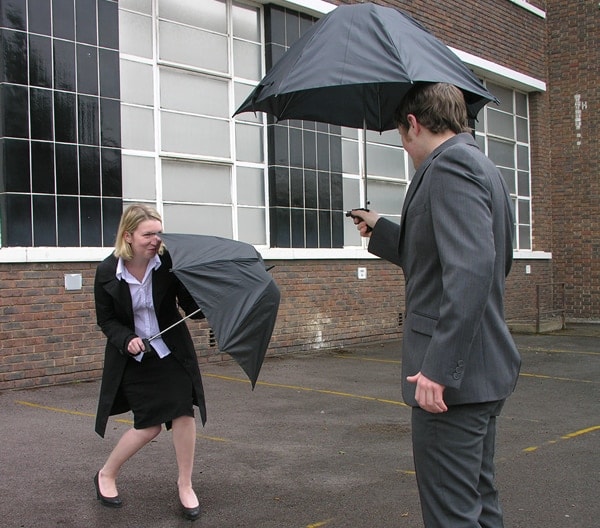 The best part is that it’s a self-loading pistol.  “This unique, funnel shaped umbrella harnesses the flow of rainwater down into its handle, a water pistol. The user can fire at will, maintaining a constant flow of water as long as rain continues to fall!”

Disfortunately, like so many other art projects, this is not a commercially-produced gunbrella.  Because if we could buy them we’d take a lighter to the sprinklers in here and just go to town.  Water-fight, then hang out with cops and firemen?  No, it’s cool, we’ve got the beer.  That’s a Friday done right.