The number of arrests associated with the 2011 London riots has officially hit 2,006 today, and much of the zany mob antics are over.  Still, the police, dealing with the phenomenal fallout and general attempt to restore order, are stretched critically thin and the more experienced violators are rising to the top. 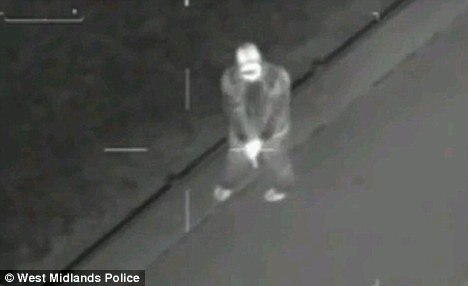 These photos taken by a police helicopter show two rioters, both wearing masks, and one’s armed.  He reportedly fired at the helicopter, which was unarmed, but flew to safety.

Of course, handguns aren’t available to most Britons, and the assumption is that this is a sign of gang-coordinated looting, the subject of a great deal of on-going debate in the U.K.  “‘The gangs came together and forgot their rivalries,’ said Paul Lewis, a Guardian journalist who spent five nights observing the violence. ‘For once, gang members from Peckham, Brixton, Clapham and Tulse Hill, allowed other’s young people to move around unhindered. The informal truce didn’t last long however. There have already been attacks on rival gangs to steal looted gear.'”

It’s not the only evidence, as the London police have released footage obtained from the blanket of manned closed-caption cameras of a large group of rioters, estimated between 30 and 40, after fleeing the scene of one looting, pauses while a single member draws and fires a single shot at the approaching riot police.  It was afterwards that the pursuing police helicopter was fired upon.

The police are pissed and shaken up.  “Chief Constable Chris Sims said: ‘Releasing footage that is so disturbing in nature is an unusual step for us as a force, however, the potential for serious harm, or worse, in this incident has led us to this decision.  Eleven shots were fired at unarmed officers to enable disorder to continue, whilst petrol bombs were also thrown at officers who initially attended the scene. 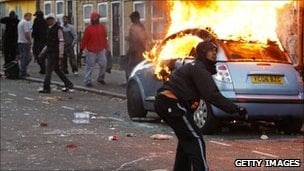 “‘This footage shows seemingly co-ordinated criminal behaviour with no regard for people’s lives, whether it be through the setting of a fire, shooting at unarmed officers or shooting at the police helicopter.  This investigation is being treated as attempted murder and arson, and I am only thankful that this is not a murder inquiry.'”

While we’re not (loudly) raising the question why these police aren’t armed, dealing with those who have been caught already is no small chore.  So far, of the 2,006 people, Scotland Yard has charged 954 with riot-related crimes, 82 have been sentenced, and 42 jailed, and that some 70% of alleged offenders have been remanded in custody.