What They're Carrying Over There: Machine guns

It was dark. Humid sticky and eerie quiet. We were staged on the outskirts of Al Nasiriyah, Iraq. And the 2003 Invasion was well on its way, when 1st Marine Division pulled onto that lonesome stretch of road abutting the Euphrates River. I played the part of a Corporal in US Marines.

Armed with a Browning M2 .50 caliber machine-gun, atop a less-than spectacular Humvee, our time as combat virgins would hastily come to an end. Positioned along the road, a dozen Humvees engaged a hidden enemy rooted amongst a track of dilapidated buildings. Among the weapons discharged that day, were the USMC’s cache of light, medium, and heavy machine-guns.

From the Squad Automatic Weapon, the M240G, the “Ma Deuce,” and the crew-serviced MK-19 Automatic Grenade Launcher.  It was not a good day to be an enemy combatant. 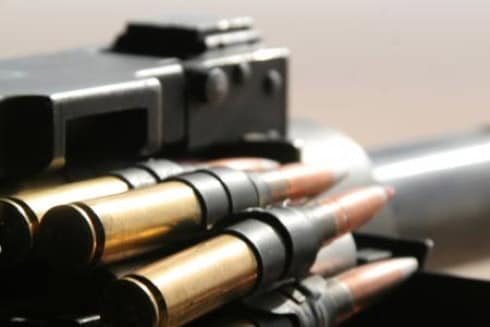 At present, it seems we’ve the same lot of machine-guns in use in Afghanistan as we did in Iraq – albeit with a few improvements/modifications. For the Taliban, PK and RPK machine-guns are the standard – although it’s not unheard to unearth a WWII era-bullet spitter in the hills of the Hindu Kush. Continuing with our head-to-head comparison of US vs. Jihadi hardware – the machine gun edition. 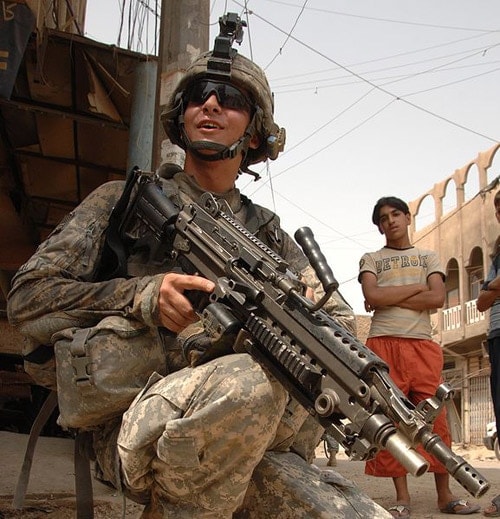 The M249 Squad Automatic Weapon (SAW) is a gas operated, air-cooled, light machine gun. Chambered in 5.56mm.  The Belgian made weapon was developed by FN Herstal and introduced into the US arsenal around 1984. With an impressive rate of fire (750–1000rpm), the SAW fills the gap between the M16 and M240G medium machine-gun. Unleashing a virtual wall of steel, the SAW can provide an infantry team with unparalleled element of support – while shouldered by a single man. Despite this, the United States Marine Corps recently announced the SAWs tenure would come to end. 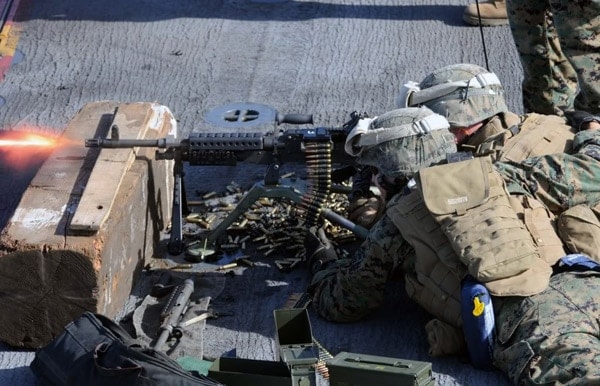 Another FN Herstal creation, the M240, is a medium machine-gun currently employed by US Forces around the globe. Essentially a .308 with a cyclic rate of 650-950 rpm, the M240 can be employed via bipod, tripod, or mounted atop a Humvee. With numerous variations, it is now considered superior to its predecessor, the M60. 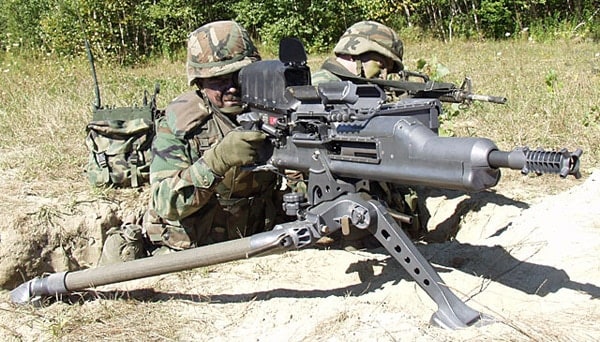 The Browning M2 .50 Caliber heavy machine-gun is a time-honored classic. Introduced in 1938 and designed by the immortal John Moses Browning, the M2 has a cyclic rate of 450-550 rounds per minutes. Coupled with a crippling muzzle velocity of 3050 feet per second, the M2 rarely takes prisoners. Traditionally a crew-serviced weapon, the “Ma Deuce,” as the troopers like to call it, has a plethora of mounting alternatives. From a couple grunts entrenched in a fighting hole, to a Kiowa helicopter, the belt-fed, recoil-operated, air-cooled weapon has seen combat from WWII to Iraq/Afghanistan. And as a machine-gunner in a CAAT platoon, the Browning M2 was by far our favorite piece of hardware. It’s heavy hitting power, reliability (once headspace and timing are mastered), and ease of operation, are just plain hard to beat. 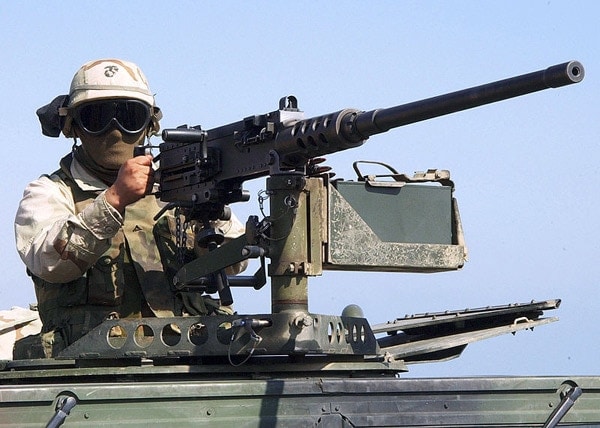 Finally in the American handbag of machine-guns – the Mk19. A belt-fed automatic grenade launder, the 40mm High-Explosive Dual Purpose Round has a casualty radius of 130 meters. With a cyclic rate of 325-375rpm, paired with a variety of choice ammunition, the Mk19 is an extremely formidable weapon. Introduced during the Vietnam War, this heavy machine-gun can punch through two inches of homogenous steel – essentially hardened tank armor. 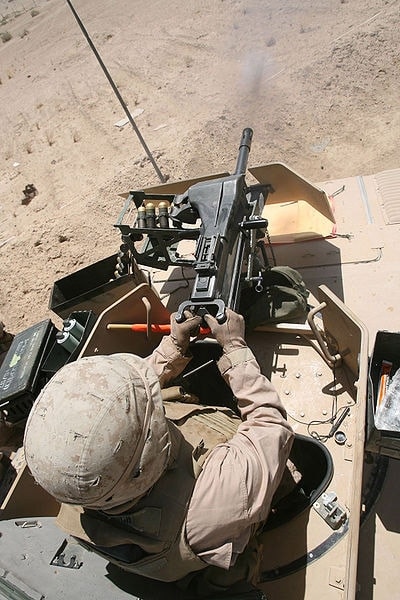 In contrast, the Taliban, mujahedeen, and other miscellaneous Jihadists are generally armed with Russian weaponry. The Soviet RPK (Ruchnoi Pulemet Kalashnikova) is a gas operated, 7.62mm light machine-gun, developed by Mikhail Kalashnikov of AK-47 fame. Introduced in 1961, it has a cyclic rate of 600rpm and is similar in appearance to the AK-47. Manufactured by a host of nations, RPK is said to have been used in nearly every military conflict since its inception. Heralded as one of the best light machine-guns in the world, rumors abound regarding its ability to fire despite immersion in mud and water. 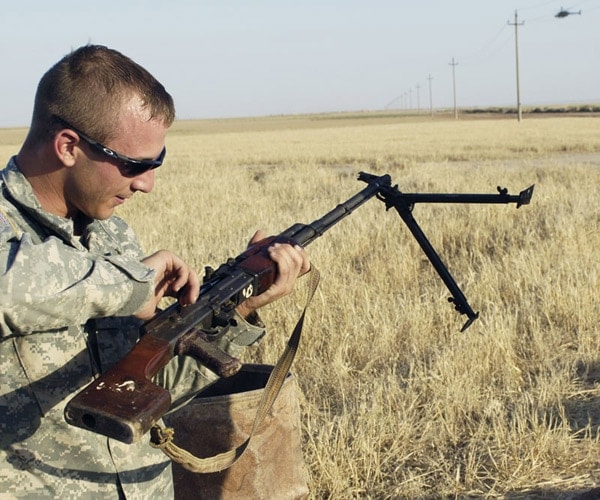 Nevertheless, the most prevalent enemy machine-gun on the battlefield is the PK (Pulemet Kalashnikova) general purpose.  Introduced in the 1960s, this gas-operated, 7.62 Caliber light machine-gun, has a cyclic rate of 650-850rpm. Another Mikhail Kalashnikov design, the PK has four basic versions: infantry light machine-gun (PK), universally mounted machine-gun (PKS), tank machine-gun (PKT) and armored personnel carrier machine-gun (PKB). Currently manufactured by a myriad of nations, it is no surprise this weapon has found a home in the hills of Afghanistan. And like the AK-47 and RPK, the PK is a hardy weapon. It’s not uncommon to unearth cache of PK’s pitted with rust, that fire reasonably well. 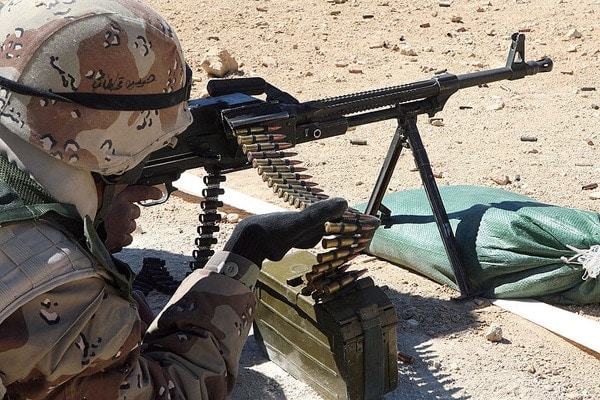 From the earliest days of modern warfare, to the satellite-monitored battlegrounds of Afghanistan, the machine-gun has proved to be one of the most effective weapons ever created and a genre destined to remain in service for years to come.