After being robbed three days in a row, Joe Rives decided to make a day of sitting quietly and hidden on his property, waiting to see if the thieves would return for a fourth grab.  They’d been steeling cable, air conditioners, and well taps.  They came back on day four, and he was ready.

His wife said he was crazy.  That he shouldn’t sit in his trailer all day in the heat and try to catch the burglars in the act, but he had reading material and a cooler full of ice water, along with a pump shotgun.  It’s just more fun to fight crime with pump shotguns, that’s a scientifically-measured fact.

The two burglars, 31-year-old Mark Kaeferle and 23-year-old Danny Martin, were not prepared to deal with someone on the fourth day, and after he approached them, six hours into his sting, the went from speechless to full of excuses.

“‘You could have smacked their eyeballs out their face and smacked their nose they didn’t know what to say,’ said Rives, who then told the two men, ‘Get on ground, put your hands on top of your head and I mean do it now.’

“Rives said 31-year-old Mark Kaeferle and 23-year-old Danny Martin sat red handed and stunned. He called 911 and the two started apologizing. They even tried to make excuses like they were allergic to chiggers; one said his wife was having baby any minute now.”  They probably should have thought of that before they went a-robbin’.

He had the police on the phone and they arrived in 13 minutes, probably the clearest argument in favor of gun ownership possible.  Still, some people are calling it “vigilantism,” which means that we really have to, as a nation, promote more adult literacy programs.  So if you know someone who doesn’t know their definitions, do your part and help them out—you’re never too old to meet your first dictionary. 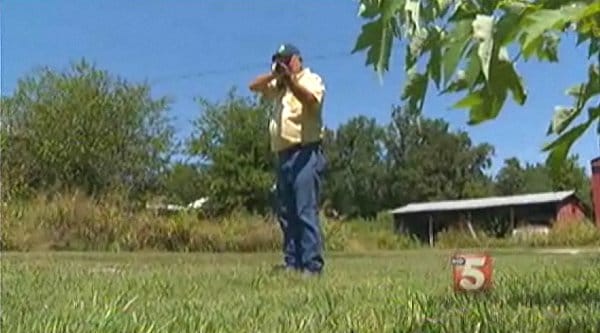 The local sheriff said that he was fully within his rights, and Rives had a message for his neighbors.  “I just hope they’ll step up, [too,] and protect what’s theirs.”

Oh, and a 100 points to the first person to correctly identify that shotgun.