Wounded in the Iraqi War, a Veteran Overcomes his Injuries to Go on a Grand Slam Hunt

A Grand Slam hunt is no small feat for most people, taking weeks and covering thousands of miles on a round-trip big game hunt, but for Iraqi War vet Eric Edmundson, the challenge was a great deal bigger than for most.  For starters, he had to learn to hold a knife and fork again.

Eric Edmundson suffered major head trauma leading to anoxic brain injury.  With the ever-present support of his family, he’s since gained the ability to walk with support and communicate through a computer, like soldier Stephen Hawking.  He is a retired Army sergeant and Purple Heart recipient. Before he went to war, he dreamed of going on a Grand Slam, which he clearly had to put on the back burner.

But now, thanks to the Wounded Warrior Project, he and his father Ed will be making the journey and go on their hunt together.  “The Grand Slam will consist of a 9,000 mile roundtrip hunting experience from alligator and bison to black bear and antelope. They will travel through eight states—Florida, Montana, Texas, Missouri, Colorado, Iowa, Idaho and Wyoming. 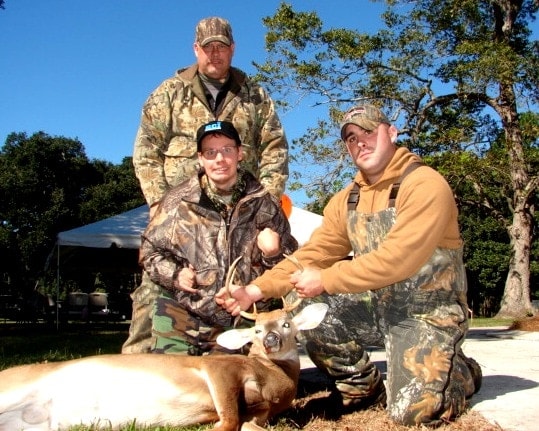 “Wounded Warrior Project Executive Director Steve Nardizzi stated, ‘We know the public will be as inspired by Eric as we are and come away with the knowledge that despite the physical and neurological challenges many wounded warriors face, their passion for what they love remains strong.  More than anything Eric’s story is one of perseverance.  He is a symbol of the strength and resiliency of the human spirit.’

“‘Eric’s dreams for his life have not gone away. We have just had to modify how he can reach them,’ said Ed. ‘We think this is an important message for anyone who may be struggling with a severe injury or illness. We hope our story will inspire those folks to change their own philosophy from “I can’t”, to “I can and I will.”‘”

The WWP is the sort of non-profit people should keep in mind when they’re feeling a little flush.  They have a remarkable list of achievements and do many good things for our vets, people like Eric Edmundson, the sort of case most would give up on.  Wounded Warrior Foundation has a facepage where they will be running coverage of Eric and Ed’s hunt, by the way.  It’s right here.