A Lucky Star: Can a Police Badge Stop a Bullet? (VIDEOS)

If you follow Guns.com with any sort of regularity, you’ve probably picked up on the fact that some of the folks responsible for you’re A number one gun site have a dirty little secret: despite being hunters and shooters with a love for all things outdoors, when they knock off of work they’re TV junkies.

Me, not so much, but I do enjoy a well thought out show that for lack of a better word “informs” it’s audience—particularly when the information intersects with my interests i.e. guns. 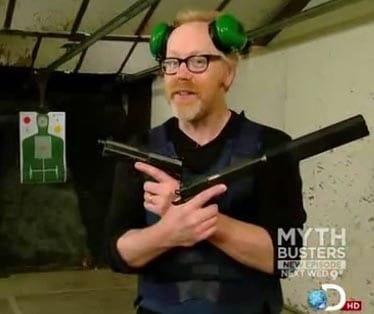 Right now, one of my favorite small screen stars to watch are the lab rats at Mythbusters on Discovery Channel.  And according to a recent episode of the ballistic persuasion, bullets can be stopped by some pretty odd things.  The following tests though had mixed results:

1. A book cannot stop most bullets. A hardcover book with 400 pages, however, could potentially stop a .22 caliber rifle round, but anything more potent would slice through it like a hot knife through butter. 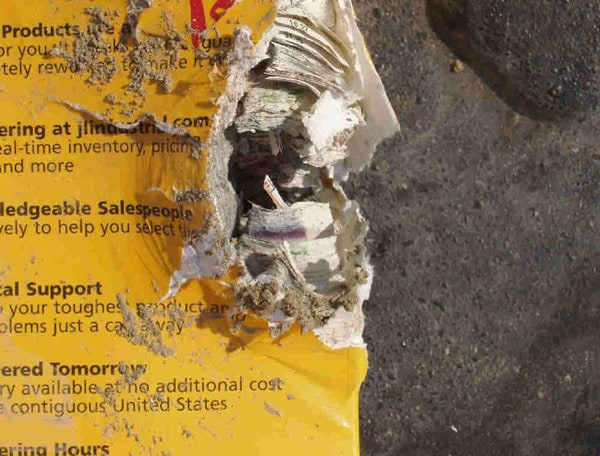 2. They ran tests with decks of playing cards and found that a normal deck of cards failed to stop any bullets. 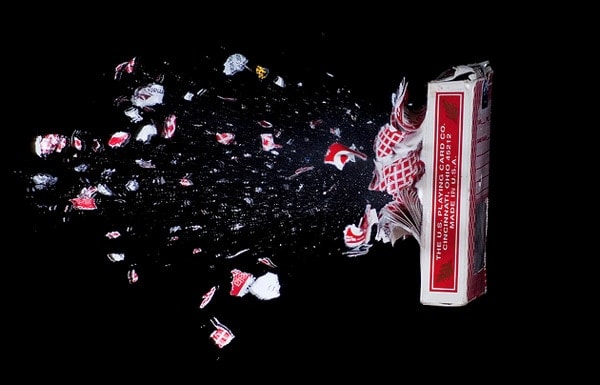 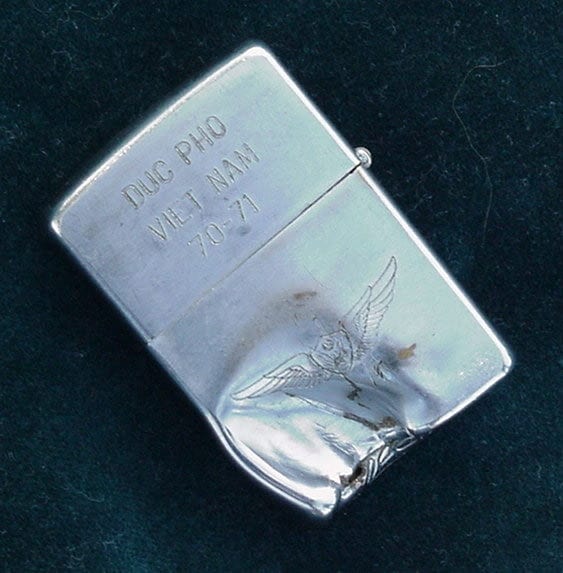 4. The Mythbusters people constructed shields made up of a ¼ inch of polycarbonate, yet these things also failed to stop bullets. 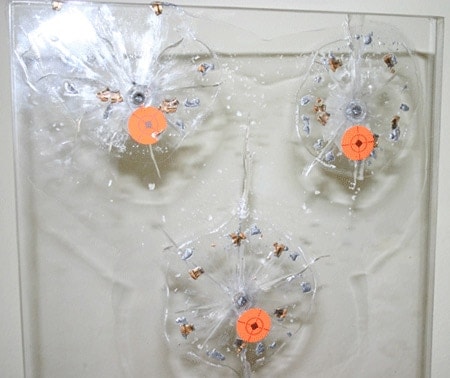 5. When they tried those same shields with a full inch of polycarbonate the results began to show some changes. The shields stopped .22, .357 and .44 magnum rounds. But a Springfield .30-06 penetrated the entire thing. 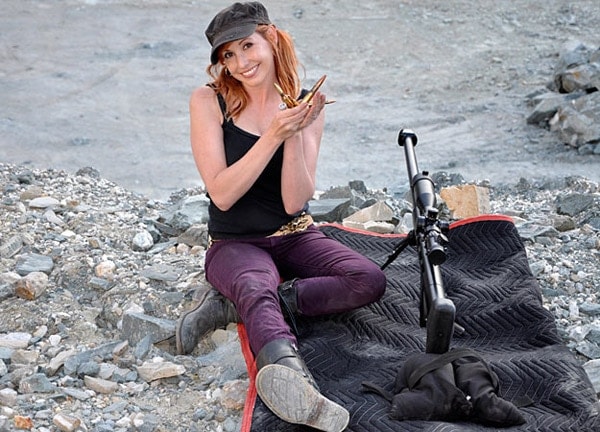 There were some additional tests, but all in all they showed that most things we take for granted such as books or lighters do not stop most bullets. Well, okay, all those results were pretty interesting, and I guess the conclusion would have to be that if you built something big and bulky enough you more than likely will manage to stop most rounds. I was once told, however, that there wasn’t a substance made that some high-powered rifle round couldn’t be designed to slice through. 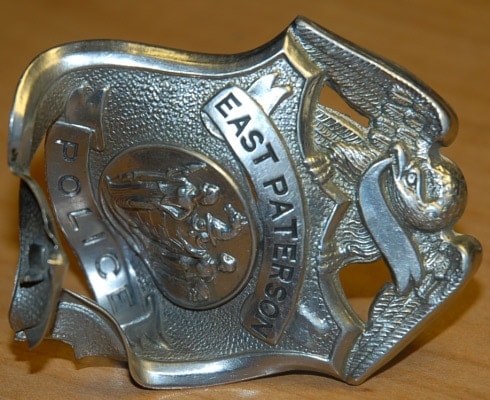 But what about a police officer’s badge?  Can that stop a bullet? We’ve all heard stories of these types of things happening dating all the way back to our early lawmen in the wild west, but what is the truth? Well, in Oakland, Tennessee recently, Officer Joshua Smith pulled over a vehicle that appeared to be weaving erratically in traffic and the temporary license plate it carried was expired. According to the police chief, his officers recently donned new badges that were heavier than the previous ones the officers wore, and while Officer Smith had been wearing body armor that day, it was that new badge that stopped the bullet fired by the driver. The driver and the male passenger escaped, but the investigation is on-going.

Speaking of the new heavier, oval-shaped badges, Chief Keith Hogwood said, “I ordered them because I like the way they look.” The chief went to say that he had some early complaints about the new badges and the weight of them, but since Officer Smith’s apparent save the complaints have stopped. 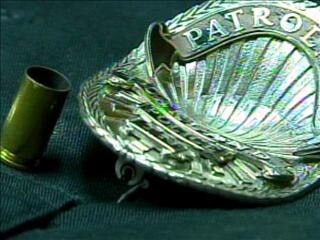 But there’s also those who will use the miraculousness, inconceivability (and perhaps overwhelming symbolism) of a badge stopping a bullet as a red herring to cover up negligence as was the case in North Las Vegas, Nevada this last February, when police were called to an apartment complex on the edge of town due to reported gunfire. As reported by Officer Bryan Kolstad, the alleged victim, when officers arrived on the scene, a suspect with a pistol opened fire on them striking one of the officers in the chest. The bullet hit the 31-year old officer’s badge saving his life.

However, things didn’t add up for Vegas detectives and when the badge came back from the ballistics lab, showing no signs of gunfire (the badge was damaged but not by a bullet), Kolstad admitted to fabricating the whole thing. 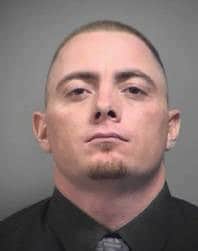 Those two incidents show both the feasibility and the unlikelihood of a Sheriff’s badge retarding a bullet.  Through the years there have been numerous other confirmed reports of police officer’s lives being saved because some idiot’s bullet had hit a badge. In March of 1894 as an example, the New York Times reported in a re-write from the Denver Republican, that a shopkeeper who was also a part-time deputy sheriff in Colorado, was saved when two robbers entered his store and shot him at point-blank range in the chest. The part-time deputy’s small gold badge he was wearing on a necklace under his shirt was hit by the bullet. It was reported to be a .32 caliber round but it failed to penetrated the badge.

There have been several other accounts of bullets ricocheting off of badges dating all the way back to our first lawmen. It makes one wonder why the folks at Mythbusters didn’t run experiments with various police badges, those worn by our earliest sheriffs and marshals all the way up to the modern emblems of law enforcement today. As luck would have it, after several letters from fans all inquiring about the subject, they revisited the issue and came up with the following results:

A silver star was tested, but it was easily penetrated by a bullet. Then a star on a copper shield was tested, but again it failed to stop the bullet. They finally tested a star on a nickel shield and, while the badge was heavily deformed by the bullet, the round did not penetrate. The test results where therefore deemed plausible. There are so many variables not taken into account in any testing, such as angle of shot, distance, caliber, the load of the bullet, type and shape of a badge (there are many variations), weight and type of metal, the way the victim officer is standing (whether he or she is standing face-on to the assailant or turned away slightly), and so many other less obvious and unexplained variables. All we know for sure is that officers have been saved by a bullet hitting a badge in the past, and for that we are very grateful. 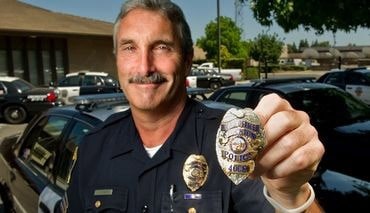